Here at CM, we are part of the Church Militant.

First off, thank you to those of you who are donating to our end-of-the-year campaign. It is very much appreciated and keeps us doing the vital work we do. For those of you who have not yet donated and are of a mind to do so, please click on the link below and donate today — and thank you in advance.

And speaking of the vital work we do here at Church Militant and St. Michael's Media, what exactly is that work? Ultimately, it's to be used to help save souls, which is, actually, the work of every baptized soul in the Church Militant. A number of people in social media seem to be completely unaware of what that term means or what we do here in relation to it.

First, the Nicene Creed (formulated almost a century before the Bible and the foundational list of beliefs of anyone baptized) contains the basic concept right there in the explicit announcement of belief in the communion of saints. It's almost entirely overlooked by virtually every Protestant denomination there is, but you can add to that list a failure on the part of most Catholics.

As an aside, someone is going to need to sit down with me one day and explain how someone can be so adamant in expressing a theological belief but have almost not the slightest bit of knowledge about what it is they profess to believe. It's kind of disingenuous.

Anyway, for those Catholics who go to Mass and, every single Sunday, say they believe in the communion of saints but don't have any real concept of what they are professing belief in, here it is in a nutshell: The baptized who are in a state of grace (as opposed to mortal sin), are viewed from three perspectives. Those in Heaven, who have attained the beatific vision (meaning, seeing God in the face as He really is, the vision of the blessed), these comprise the Church Triumphant.

They have attained salvation and so merited it by cooperating with the graces afforded them by Our Lord's redemption for us on the Cross. Sidebar again — redemption and salvation are two entirely different things. Bad Catholics and almost all Protestants have this completely wrong. Redemption means that the guilt of our sins on the spiritual plane has been paid for and we are now able to be saved, not that we are.

This is precisely why St. Paul commands all Christians, in his letter to the Philippians, to "work out your salvation in fear and trembling." Redemption is won only by Christ and His Passion, but salvation is something we must participate in to ever have it. No one is "saved" this side of the grave. So those who have participated in and merited their salvation by cooperating with the graces of the redemption, these are the Church Triumphant. They have won. Victory is theirs for eternity.

The second dynamic at work is the Church Purgative, those baptized souls who died in a state of grace but are not yet perfect. The beloved disciple, St. John, tells us in the Apocalypse that "nothing imperfect shall enter in," enter into Heaven — and when you think about it, how could it? If imperfect souls were walking around populating Heaven, well, how exactly would that be any different, substantively, than right now on earth?

Likewise, as the Son of God Himself commands, "Be ye perfect as your Father in Heaven is perfect." So how does someone who dies in non-deadly sin (as St. James distinguishes from deadly sin, mortal sin), how does that person achieve the beatific vision? They won't be damned because their sin is not deadly, yet they are still "in sin" and, therefore, cannot enter into the beatific vision.

Enter the Church Purgative, where God's justice and mercy collide, what Catholic theologians have named Purgatory. However, it actually predates Catholicism by centuries. The Jews believed in Purgatory for centuries before the Church, as described in 2 Maccabees, but Martin Luther conveniently tossed that book out along with six others. The souls in Purgatory are saved, but they do not yet enjoy the necessary perfection to see God in the face. They will when their purgation ends but not yet.

And this brings us to the Church Militant (a military, being militant), the theological phrase identifying the souls of the baptized still fighting to attain salvation. It is to these, to us, that St. Paul is speaking when he says to "work out your salvation." Why? Because for the very simple reason that since you have not yet secured it, you can still lose it. And, even more frightening, it is entirely up to us, each one of us.

Follow this theologic to its ultimate conclusion. God wills that all men be saved and come to knowledge of the truth. The Holy Spirit assures us of that in Sacred Scripture. That swarms of humanity are, in fact, damned in the end means they chose their damnation, chose against God's will. They rejected the love of God, the mercy of God. How did they choose against God and embrace the fires of Hell? They did it by their actions, their deeds.

Jesus Christ Himself says, quite explicitly, If you love Me (which is necessary to be in Heaven, loving God) then you will keep my Commandments. Disobeying God, rejecting the fullness of His truth, is the ticket to damnation. And, moreover, each person consequently chooses his own eternal destiny. The Son of God personally testifies to this, at the end of Matthew's Gospel, speaking about the elect and the damned on the Last Day.

God's love is unconditional, but salvation is not. It is very much contingent on us — our choices, our deeds, our moral choices. Think of Heaven as the goal of a war. For 2,000 years, in fact, all the saints, including Paul, have spoken of attaining Heaven as a military campaign, a spiritual war. Just because some of our comrades may have successfully captured the flag, the flag of salvation, does not mean we will.

Work out your salvation in fear and trembling.

Others among our comrades have been injured and need to be medivacked to hospitals to recover their health. They, too, have achieved victory, even if they cannot participate in it just yet. They have to recover from their wounds. Just because those comrades are also assured of victory does not mean we are. While the kingdom of evil has fallen, has been defeated, there is still much to do in the way of mop-up duty. Dangerous enemy units who refuse to stop fighting are still very much lethal, and, if you encounter one of them, unprepared, they will kill you. You will never participate in the victory that has already been won.

This is the communion of saints: those very much still fighting, the militant; those recovering from their battle injuries, the purgative; and those enjoying the spoils of war, eternal life, the triumphant. There is a deep relationship, a band of brothers, a brotherhood, a common union, a communion between these groups; and this is the communion of saints, believed in by the very first Christians, stretching back millennia.

While we (here on earth, still engaged in the fight for our salvation) know these truths, it is our responsibility to speak these truths, and we must speak them in whatever forum we find ourselves: family dinners, the internet, social media, the culture at large, politics, wherever. The truth is seldom popular — even less so, well-received — because the truth has this certain dynamic, a self-conviction aspect to it.

Why do most who hear the truth, while admittedly drawn to it, eventually walk away from it? Because once comprehended, the reality that I must change hits home, and this is where the rubber hits the road. Everyone is changed by the truth, they can't help but be. The question is, will the change be for the better or worse in a given person? On the individual's answer to that question hangs his eternal destiny, Heaven or Hell.

Here at Church Militant, we are in the battle to help as many as possible come to this truth and choose wisely, train for battle, fight the war and join the Church Triumphant. Whatever you are able to donate to this continuing work, thank you. 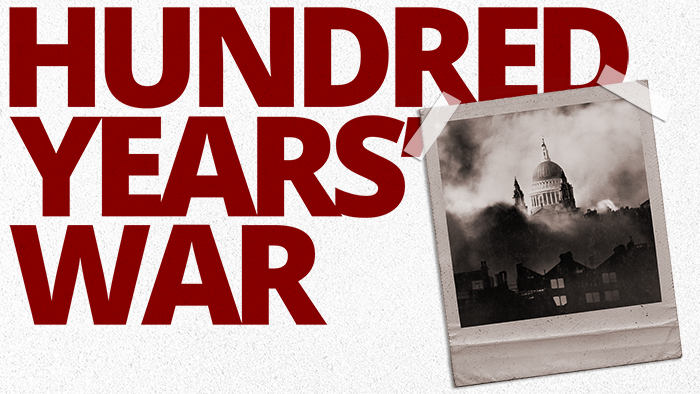 Hundred Years' War
Things get worse before they get better. Really?