As Catholics and Americans in general (especially Catholic Americans) peer into the future, or at least try, it looks more than a little murky. There are so many possibilities that it's impossible to do any real, thoughtful analysis. Between the treachery in the Church on the part of leaders, with a great deal of cowardice mixed in, and treachery on the part of Marxist politicians who long ago dumped any pretense of caring about the nation, some of the possibilities of the future look bleak indeed.

When trying to discern the future, it's helpful to look at some relevant facts. And one that must be acknowledged is this: The Marxists control every major cultural institution in the nation — the news media, education, the courts, Hollywood, giant tech, and add on top of that (speaking temporally) the Church. And note, it's not just the Left. If only it were just leftists.

That squishy term long ago lost any cover-value it had. We are staring headlong, straight into the face of cultural (and quite possibly, very soon, political) Marxism. Our Blessed Mother said more than almost anyone actually realized when she warned Russia would spread her errors throughout the world. The "commies," as we now understand them, did not go away — evaporate into thin air — when the Soviet Union dissolved. They just morphed.

Much of the sad story of their coming to dominance is one of betrayal. But the largest betrayal has been of the natural, moral law, and in no place has this had a larger impact than in the Church. The natural law, specifically referenced in the founding documents of the nation (i.e., the "laws of nature and of nature's god"), has been almost completely jettisoned, ignored and killed. It has been replaced by subjective, feelings-based jurisprudence which has brought the nation to the edge of radical — and perhaps final — transformation.

In 2016, Trump's surprise victory not only caught the Marxists off guard, but was secured by a barrage of prayers to Our Blessed Mother to preserve the nation for four more years.

All that is clear is that nothing is clear. It's like the country is drawing a collective breath wondering what will happen next. Some unpleasant futures must be considered, however ominous, because they are real possibilities. And the reason they must be considered is because they present an even more urgent reason for faithful Catholics to get a grip on the times we are in and begin to seriously think what all this means for themselves and their loved ones.

In 2016, Trump's surprise victory not only caught the Marxists off guard, but was secured by a barrage of prayers to Our Blessed Mother to preserve the nation for four more years. Those praying intently had no doubt been thinking that in those four years, new Supreme Court justices would be appointed and the fate of Roe v. Wade would be sealed. Also during those four years, the actual filth dominating so much in the Church would at last be completely exposed.

But what happened? Not much. A lot of hoopla and political theater, and when the dust had settled, things stayed pretty much the same. In the Church, the bishops were again given a pass by brain-dead, zombie Catholics (after just a few bad days in the press). Abortions continue unabated; homosexuality has made even greater strides, assisted by gay clerics; leaders have not repented, not even close; and the already-miserable situation of the Church has deteriorated.

So the question arises: Do America and, specifically, its Catholics, deserve another moment of grace from Heaven? Will another four years end the slaughter of millions of innocents? Will four years bring a sea-change to cultural acceptance of sexual immorality? Will laity finally rise up en masse and shake the churches free of the ecclesiastical filth, demanding accountability — or will they, again, simply roll over and defer to lying bishops as they go back to sleep?

What will you do with the additional time if God grants a further reprieve?

As we peer into the future, and some are ramping up the prayer chains again, we have to ask the question: "What will we promise Heaven that we'll do with the four years?" The culture is in the filthy mess it's in for one reason and one reason only — the bishops of this nation have betrayed Christ thoroughly. Even now, they preach wickedness; poison spews from their mouths, and only a few raise any concerns. Their lapdog media outfits will continue creating cover stories for crooked bishops. The archbishops and cardinals will continue sitting on billions of dollars in endowments and fleecing the flock. Seminaries will continue to churn out emasculated men, although in far-fewer numbers than in past decades.

What exactly is going to change, at least in terms of the good? Will various priests who do more or less understand the crisis stop yammering on about stupid and pointless things like "tone" and "divisiveness"? Will bishops who know their brother bishops are preaching heresy and dissent challenge them openly to their faces and call out their evil?

The sad fact is this: We are in a war. The bad guys are about to blow us out of the water and (if they have their way) erase all vestiges of us from the face of the earth, and very few actually understand this — way too few. When Abraham was bargaining with the Lord God over the fate of Sodom, he kept gaining assurances from God (bargaining all the way down) that if he could find even 10 good men, God would spare the city.

The Catholic Church — and she alone — was established by the Son of God to fight and defeat evil. It is the only means of salvation. Too many Catholics, as well as their leaders, don't believe that. And so, the questions arise: Do we deserve to be spared? What will you do with the additional time if God grants a further reprieve? Because if it's just back to the same old routine, then why put off the inevitable?

However the coming election and the following years play out, what will be required of every faithful Catholic is nothing less than heroism, one way or the other. So remember what you've always been told — be careful what you pray for! 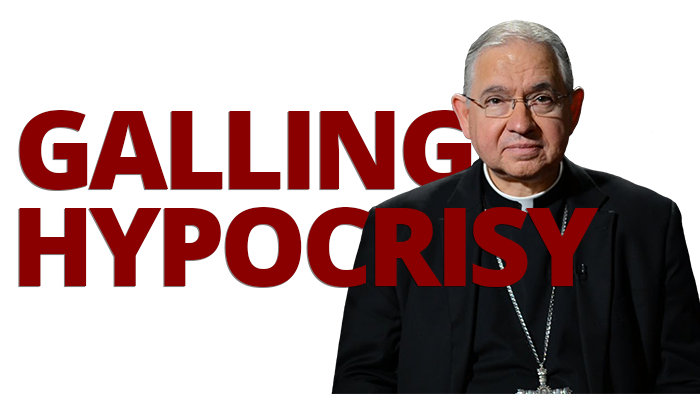