And not a moment too soon.

There are now less than 200 days until the midterm elections, which many are seeing as payback for the stolen 2020 election. There is no doubt that a Great Pushback is going on in all areas of the country, from the Elon Musk Twitter deal, to the almost immediate canceling of CNN+, to Catholic Florida governor Ron DeSantis canceling Disney — all the momentum is on the side of the anti-left.

It's for this reason that everyone is expecting a complete wipeout of the Democrats in November, and not a single analyst or expert is predicting anything less. The only question is the margin of victory. But just below the surface of the anti-left forces is a growing rebellion against the GOP establishment — Kevin McCarthy, Mitch McConnell, Ronna McDaniel and so forth.

The U.S. Bishops need to experience some pushback in their world.

They are all viewed as complicit in the destruction the Marxist Left has wrought across the country. In fact, based on past history, it looks very much like all the so-called conservative establishment is interested in is being the opposition party, constantly tweeting, hopping on Fox News and whining about the Democrats and, of course, raising money — hundreds of millions.

But when they actually have power, they do very little with it. It's much more lucrative to be on the outs and complaining. All you have to remember is the Obamacare fiasco, when the GOP swept into power on Capitol Hill on Donald Trump's coattails and then let it stand. Rank and file are sick of the political and financial posturing, and, as a result, many of the peasants are actually running for office this cycle — first timers who go by the philosophy "if you want something done right, do it yourself."

And notable among them are not a small number of Catholics — and not the phony Catholics the U.S. bishops love and embrace, but ones who seem generally grounded in their faith or at least grounded to the extent they feel some obligation to get elected and roll back the tide of evil. Last week, Church Militant had the chance to catch up with highly controversial congresswoman Marjorie Taylor Greene and ask her about what could be called "the new breed."

Noteworthy among the Catholics running for Congress are:

Noteworthy among the Catholics running for U.S. Senate are:

Likewise, those running for governor of their respective states (all of whom have been interviewed by Church Militant):

This isn't to say each of these contenders is a theologian or has Church teaching down 100% or that they somehow managed to avoid the poisoning by the Church of Nice. But it is to say that, on a natural level, they are influenced at least partially by convictions and beliefs molded by authentic Catholicism. They get that things are way off and are responding as best they know how — each in his or her own way.

Rank and file are sick of the political and financial posturing.

The same is true of Congresswoman Marjorie Taylor Greene, who looks around the culture and is blown away by the loss of what Catholic teaching calls "virtue." MTG is universally despised by the Marxist Left for her straight shooting and belief in Christ. So much do they hate her that they are using trumped-up accusations about Jan. 6 as they try and prevent her from even running — attempting to block her from getting on the ballot.

She actually had to go to court last week to testify on her own behalf in response to them. In her mind, it's pretty clear what's going on. The full interview — well worth the watch — is available by clicking on the provided link.

In tomorrow's Vortex, we'll have more thoughts from MTG and the pre-eminent civil rights issue of our day. MTG needs to hold a tutorial session for the U.S. Bishops and their staffs, who need to experience some pushback in their world. 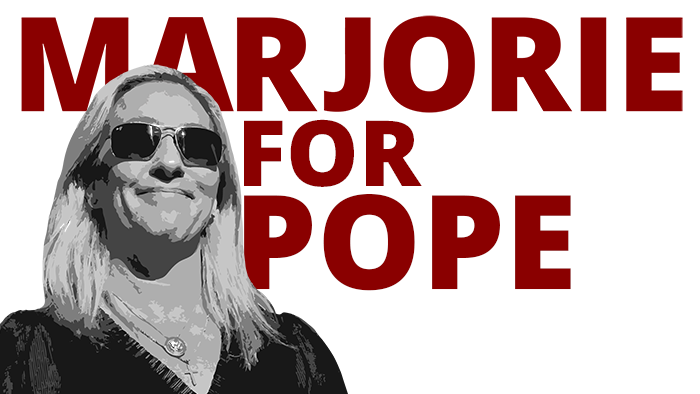 Marjorie for Pope
Bringing the hammer.