The Hug of Martyrs

From the Son of God.

Merry Christmas — from all of us at Church Militant — to all of you and your loved ones. If Thanksgiving was any indication, lots of people will tell their governors and official scaremongers to shut up, and then hit the road to see their loved ones.

And what is the very first thing they will do? They will hug because they are so excited to see each other. They'll hug so tight, it looks like they'll damage each other's spines. It's always a joy-filled moment that bespeaks a spiritual reality, expressed in a material manner, like the first Christmas.

People hug really hard as though they would pull the entirety of the other person into them, fuse together, form an unbreakable union so intense that they would practically be the same person, almost indistinguishable. That's what you are looking at when you look at the manger: A union of the divine and human.

God "hugging" humanity so closely, so strongly, that in this case, they are fused together inseparably. The God-Man. The Man-God. And this is precisely what is going on when we receive Holy Communion. Our Lord was born of His immaculately conceived Holy Mother and placed by her into a feeding trough.

He who was born in Bethlehem, which means "house of bread," would later call Himself the "bread of life" and instruct those who love Him to eat Him.

He who was born in Bethlehem, which means "house of bread," would later call Himself "the bread of life" and instruct those who love Him to eat Him. Speaking just naturally, no one can be absorbed into another, much less remain there. No matter how deep the love, no matter how intense, two people cannot fuse together physically. Even the marital act (in which the two become one flesh) does not endure for eternity.

But "fusing" with God does last for eternity; it is the "hug" that never ends. The divine food (for that is what He made Himself to be) laid in the trough was born to not just die, but in dying, supplied an avenue for us to be forever united to Himself. It is not just our souls that are saved — even though we freely use that expression.

No, we are saved, in our complete humanity. The body itself rises on the last day, restored to not just natural life but supernatural life because, in the course of this natural life, it was reinforced and prepared with the supernatural bread, the living flesh of Christ Himself. The Blessed Sacrament is, in the last consideration, the supreme act of love. But in order for us to be physically united to Christ, He had to become physical, material, touchable, consumable, unitable to our bodies, our flesh.

Divinity could not be transported through our veins, pumped through our cardiovascular system, pushed along by our beating hearts, unless the God who created those hearts for Himself would first unite Himself to our flesh. In so doing, He fashioned, willingly captured, His divinity in human DNA, and then, becoming our food, passed His divine DNA on to those He loves most in the world.

This is precisely why, at Capernaum when speaking of Himself as the bread of life and the necessity of eating His flesh and drinking His blood, He said, "He who eats my flesh and drinks my blood abides in me, and I will raise him up on the last day." What you see before you lying in the manger, the bread in the feeding trough, will be the source one day of your own glorified body, made ready and prepared for everlasting glory — a glorified body.

When you go up to receive Holy Communion during this Christmas season, the Lord and King of the Universe is giving you a Christmas hug, and He means to never let go. It is the hug of love, but we must hug back to whatever degree we are able and called to. Our Lord told us that, for some, that return hug would involve the sacrifice of our own body, just as He did.

Some are called to return the divine hug with a martyr's hug, which involves the giving up of one's life for Him. As He Himself said of this, "No greater love hath man this, than he lay down His life for a friend." There can be no greater sacrifice than to give over both body as well as soul out of love for Christ. There is nothing more you possess. You give up everything.

This is why Holy Mother Church reserves such great honors for the martyrs. During the solemnity of Christmas, the octave or the eight days following, the particular feasts Holy Mother Church proposes for us to contemplate don't at first seem to have anything to do with Christmas, yet, there they are, nestled right into the very octave itself.

The day after Christmas Day is the feast of St. Stephen, the first to be martyred for the Faith. Then we have, immediately following him, the feast of the Holy Innocents, the male children under 2 years old butchered by Herod in his lust for power. Then, there is two days later the feast of St. Thomas Becket — murdered at the altar by yet another vicious monarch thirsty for power.

We live in perilous times. Great anxiety, soul-disturbing anxiety about the unknown, plagues our minds and our hearts. No one knows what the future holds or how all the evil will play out and touch upon us. Recall, however, that, as the beauty and joy of the first Christmas was unfolding in Bethlehem, a few miles away, a murderous tyrant was plotting the destruction of the newly born King, and he would slaughter even babies to get at Him to secure his power.

No one should seek out martyrdom, but all should embrace it if it comes.

The Catholic faith is lived in tension in so many cases. One of those tensions is the joy of Christmas in the midst of the anxiety about a murderous regime intent on killing Him again. Down the road, our response may require the return hug of martyrdom, but as natural as it is, fear should not be the predominant emotion, but joy — joy at being able, being chosen, to show forth the depth of our love.

No one should seek out martyrdom, but all should embrace it if it comes. That is, after all, the entire point of Christmas: To receive such a noble gift, in the body and the soul, that we are transformed and taken up into the divine and everlasting hug. May the Babe of Bethlehem grant you and your loved ones the most beautiful graces this holy season.

From the entire Church Militant family, and from those of ours who have passed into the Church Triumphant, Merry Christmas! 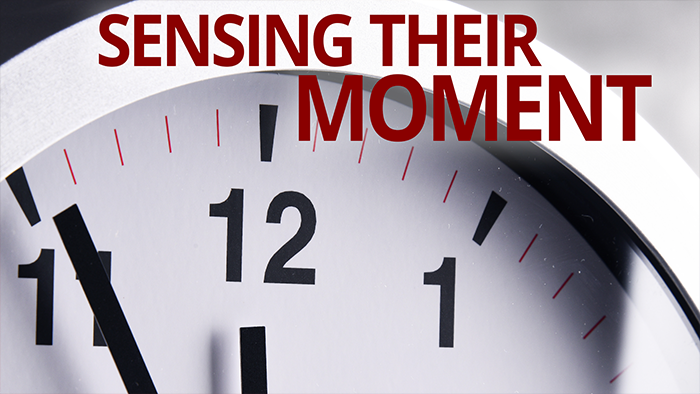 Sensing Their Moment
The rise of the atheists.