Each deserves the same verdict.

We're in Texas for the next couple of days on assignment, but as the aftershocks of the Frank Pavone case continue to reverberate through the Church in the United States, lots of questions are starting to be asked. One main one (which indeed was the focus of yesterday's Vortex) is, How has James Martin escaped such treatment?

In fact, quite the opposite: He is celebrated by bishops and given platforms in their dioceses from which to corrupt the minds and hearts of the faithful. Cardinals endorse his pro-sodomy books, writing glowing reviews of his propaganda because it dovetails nicely with their own perverted agendas.

Even the pope sits down with this man, lending an air of credibility to his filth, even giving him a post on a Vatican committee. But with all that said, an inescapable comparison arises between the pro-gay Jesuit and another infamous Martin: Martin Luther.

Although Luther worked his way up to his break from the Church through incremental steps, denying various teachings along the way, it did take some time for him to completely lose it. But when he did lose it, he lost it big-time. He denied virtually everything the Church teaches beyond the most basic, rudimentary things; but along the way, he jettisoned all sorts of other stuff.

Here's the reality: Catholic teaching is completely and totally unified because its origin is Jesus Christ, the Second Person of the Trinity. And since there is nothing but unity within the Trinity, nothing which emerges from It can be anything else than unity. So, yes, Catholic teaching is a single, unified whole. It is always an all-or-nothing proposition; it must be.

James Martin is every bit as destructive as Luther and indeed much more.

But when you pull on even a single thread, you threaten the entire framework. So when a crazy cleric in the 16th or 21st century comes along pulling on a thread, it won't be long before he starts pulling on other threads. Luther started with the corruption of the hierarchy — some things don't ever seem to change — but moved from problems with the leaders of the Church to the teachings of the Church.

It wasn't long before he was denying Purgatory, the communion of saints, the priesthood, the Mass and Sacred Scripture's role in the Church. That's a lot of threads to be pulling on, but he did so until he brought down Christendom and set the stage with his heresy for billions of souls to be denied the truth of Christ.

What they got instead was the truth of Luther, sometimes, occasionally, here or there coinciding with the truth of Christ. But when a conflict arose, it was the truth of Christ that always got tossed overboard (like, for example, Martin's destruction of the Old Testament as well as his perversion of the New Testament). In addition to tossing out whole or parts of seven books of the Old Testament, he inserted the word "alone" into St. Paul's letter to the Romans, saying, "We are justified by faith alone."

That's not what Paul said, but Luther didn't care — he did it anyway. He eventually corrected his action, but the damage was done. Right down to today, hundreds of millions of people who claim to be Christian insist that all they need is faith, sola fide, and they are saved. Not even close: Christ Himself repeatedly denies this and insists on much more than just faith. Faith is the first step, not the only step.

But as we said, when a conflict between Christ and Martin arose, Luther conveniently always sided with himself. Ultimately, what Martin Luther did was deny the authority of the Church, which, bottom line, is the authority of Christ. Our Blessed Lord gave His own authority to the Church, so to deny Her authority is to deny the Giver of that authority, the Son of God.

Now fast-forward 500 years later to another Martin, who, like his forebear, is also denying the authority of the Church. He's a lot more subtle about it than Luther, but make no mistake, James Martin is every bit as destructive as Luther and indeed much more. Luther at least had the integrity to get the hell out; James Martin remains, able in his collar to inflict much more damage than without it.

Martin Luther had his agenda, and James Martin has his as well. James Martin's agenda is to normalize, in the Church, sodomy and homosexual acts; to make gay sex seem as something, well, acceptable, even holy. He has declared that those who are attracted to the same sex are "born that way" — no, they aren't.

He accepts same-sex "marriage" — no such thing, not in any sacramental manner. He puts out that the Bible may be wrong about homosexuality in its condemnation of it — no, it isn't. He says the language of the Catechism is wrong when it says homosexuality is "disordered." In fact, there is nothing that the Church promulgates about homosexuality from a moral standpoint, that Martin doesn't either object to, undermine or both.

His entire social media empire is nothing but a monumental testament to his denial of the authority of the Church in Her teachings. But like Martin Luther, James Martin, also having pulled one thread, starts pulling others. He says Jesus didn't really have a clear idea of His mission, may not have known Who He was and needed the help of fallen humans to understand the scope of His mission — what a load of garbage. All of that absolutely and completely flies in the face of Church teaching, which translates into a denial of the Church's authority.

Small wonder he suggests that Jesus didn't really "get Himself," because if that were true, then it would follow that the Church also doesn't "get Herself," which, again, would mean all these teachings could be wrong and in need of "reimagining," "reformulating." Like we said, Catholicism is an all-or-nothing proposition. Because of Her claims, the Church must be either all correct in her teachings or all wrong. In this case, there is no middle way.

Martin is a Jesuit (by the way, Luther was an Augustinian) and, being a Jesuit, knows all this ecclesiology (how the Church sees Herself and understands Herself) quite well. She is the Bride of Christ; the spotless, immaculate Bride of Christ; the New Jerusalem coming down out of Heaven, as a bride adorned for her husband.

That last line is from St. John's Apocalypse, what Protestants call the "Book of Revelation," a book that Martin Luther scoffed at, saying, "A book of revelation should at least be revealing." James Martin likewise mocks Scripture by calling into question its inerrancy. Where could you possibly find in the Scriptures that Jesus Christ was unsure of Who He was, what His mission was?

Yet Martin pursues a lie, looking through the pages for any stray syllable that can be twisted to his own agenda. Theology is not an end in itself, and when the Church has settled something, it is settled. Theology, at that point, steps in and helps us gain new appreciation for an existing truth. It does not create new truth, but that is what Martin does. Sometimes (most of the time, in fact), it is subtle, planting just enough doubt to lead to error.

But sometimes, it is straight-up heretical, like the claim that Our Blessed Lord needed the Syrophoenician woman to help Him understand that His mission was for the gentiles as well, not just the Jews. Well, thank God Jesus just happened to stumble into that town at that time, or all of us gentiles would have been pretty much doomed if that woman hadn't pointed that out to the Son of God.

Likewise, thank God that God had the humility to listen to her and change His mind and come to a better understanding of Himself. What an insane, spiritually poisonous exegesis Martin inflicts on the faithful and, more to the point, is allowed to inflict — allowed by the very same cowards in miters who have permitted disaster to be visited upon the Church, in all quarters of the Church, be it heresy or schism.

Each leads away from the Church and the truth of authentic Catholicism. Like Martin Luther, James Martin is one of many pied pipers leading the children of God over the cliff. He just uses heresy as his favorite instrument; others use schism. James Martin needs to be put on trial for heresy.

He needs to explain in full detail, without the use of his diabolical vagueness, precisely not only what he believes about the Church and Her teachings, but also that he absolutely and without any reservation accepts and believes with divine and Catholic faith everything the Church proposes for salvation — and that includes, most especially in his case, that men having sex with men is, at all times and everywhere, evil.

Other priests cannot be laicized or marginalized for much lesser reasons and this Martin not held to account as well. Martin, of the Luther sort, was excommunicated. James Martin, for the good of his soul and all those he currently plunders, must also be excommunicated for his manifest evil and heresy. He must recant and repent, or, as St. Paul says, be cast out and handed over to the Devil.

The bishops had better come to understand, in short order, that they are going to face judgment on these very matters when they die. They don't get to remain silent about this marauder. They have let a wolf into the fold, again with the name of Martin. 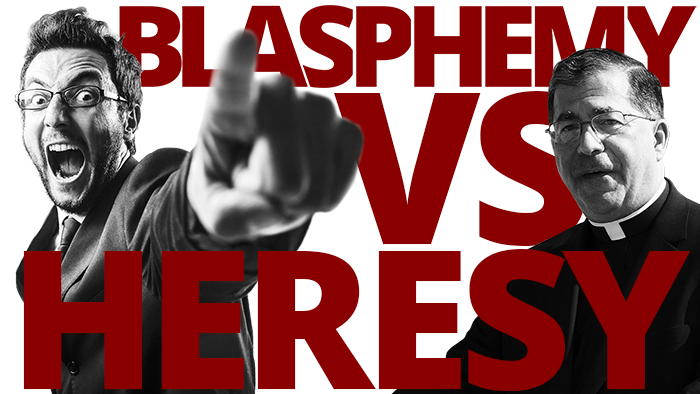 Blasphemy vs. Heresy
Which is worse?