And they never have.

A few days ago, Church Militant reached out to the diocese of La Crosse asking about the whereabouts of Msgr. Jeffrey Burrill, who came to be known as "Msgr. Grindr."

He got the nickname because media reports almost a year ago identified that, through the use of the homosexual hookup phone app, Grindr, he had been having homosexual liaisons with possibly hundreds of men. When the news broke, the gay cabal in the hierarchy immediately circled the wagons around him.

First, Los Angeles archbishop José Gómez, president of the U.S. bishops' conference, issued a bland statement that Burrill was resigning his post with the bishops' conference immediately and that, whatever he had done, it didn't involve boys.

Then his own bishop, William Callahan, dutifully snapped to and issued his own nothing-burger statement merely acknowledging Gómez's statement. And just like that, no more Msgr. Grindr. He had been sucked into the vast cover-up network that the bishops have become so expert at operating. They get away with murder because they are accountable to no one on this planet, and they know it.

They get away with murder because they are accountable to no one on this planet.

They get money from you, and they spend it on whatever they like while you can just kiss off — that is, until they want more from you. Then they tell you to donate so they can continue the work of the Church.

Since when did the "work of the Church" involve hiding homosexual priests or deliberately hiding and obscuring the truth about the shenanigans that have so destroyed the Faith in America?

So on one level, it can't be surprising that this past weekend Bp. Callahan reintroduced the freshly minted Msgr. Grindr to a parish as the brand new administrator, now back from months of reflection over something.

But what he was reflecting on was never told to anyone. But it must have been severe enough for him to go off and reflect on it for months, but not severe enough for the people to be told. Yet this is how these crooked homosexualist bishops and their staffs work.

These men don't care about you, God, the Faith or anything. If they did, they would all come clean. But they don't and they won't. They are so screwed up in their heads that they actually believe they are right. They truly believe your role is to just shut up and give them money and they will run the show.

As for actual information, the absolute barest of details will have to be enough. From Bp. Callahan: "Msgr. Jeffrey Burril has recently come off an extended leave from active ministry. During his leave from active ministry, Msgr. Burrill engaged in a sincere and prayerful effort to strengthen his priestly vows and has favorably responded to every request made by me and the diocese."

So now he's getting dumped into St. Teresa of Kolkata parish in West Salem, Wisconsin, a small parish but still a parish. We should note that diocesan insiders tell us that Callahan first tried to pawn him off to other bishops, but none of them took the bait.

When Church Militant spoke with Debbie at the diocese last week, she denied the media reports were accurate and then backtracked and said some of the reporting was. When we called and asked the switchboard receptionist about the latest on Burrill, she quickly transferred us to the woman who "handles those calls."

Then Debbie picked up the phone and was very coy with us, not disclosing at any point that she is actually Bp. Callahan's personal secretary, something we have since discovered. Her refusal to disclose that gave her the appearance of separation from the story, that she had to run and get permission from "higher-ups" to answer any of our questions.

In short, it's not just the bishops involved in the cover-ups and deceit — it's also their staff, staff that have a very odd sense of loyalty, not to the truth and the Church and the faithful, but to the man who signs their checks.

So, from the U.S. bishops' conference in the person of Gómez, to Bp. Callahan and his secretary, not a single member of the gay cover-up circle has revealed a blessed thing about Msgr. Grindr that they have not been forced to reveal — and even then, it's always done in the most deceitful and cunning fashion possible.

In his statement from last year when the news broke that Burrill was hooking up hundreds of times with gay men through the Grindr phone app, Callahan immediately went into defensive mode. He said that the media reports had established "no facts in truth" about Burrill's behaviors but added it was necessary to "pursue and investigate all misconduct allegations."

Since you're sticking him back in parish life, bishop, is it fair to conclude your investigation is over? What are the findings? Who conducted it? Who paid for it? What were the recommendations? Were the charges you said had not been established finally established? And are they true or are they not?

Why hasn't Msgr. Grindr ever released a statement denying all this if it's not true? If it is true, why is he being allowed to continue in the priesthood or, at the very least, in a parish? Do you really think, bishop, that if any of this is true that he should be anywhere around young males?

Why wouldn't you tell the parishioners at St. Teresa's the full truth? In fact, you didn't tell them any truth other than he went off and prayed. And if none of this is true, precisely what was he reflecting on and praying about? What did he need strengthening in? Did he receive any professional counseling at all? If he did, where and when, and who paid for it? And if he did, what was it for?

Is it plausible to think, bishop, that a man who has not denied his behavior has suddenly changed after a few months of prayer? Was he not praying while he was offering Mass before he got caught? Was he ever trying to hit on young guys in the Church when the mood overtook him? How do we know he wouldn't do it again? Is he going to be hearing confessions in his new role as administrator at St. Teresa's? Have you discussed with him his fitness for sitting in confession if a young guy comes in and confesses homosexual acts?

Bishop Callahan, you lie to your people by silence and deflection. Nowhere has anybody in the Church in this whole damnable scandal issued a peep of apology to the sheep or breathed a word of remorse for the damage caused to people's souls.

It's just business as usual with all of you, from your deceitful secretary on the phone, to the other chancery personnel who know all about this, to the USCCB who promoted the gay-sex addict, to Gómez, who also lied by deception last year and all the wealthy Catholics who keep you all in place with your lies and cheating and theft.

A few years back, it was discovered by media and court proceedings that Abp. John Nienstedt of Milwaukee* had protected a child molester because that child molester was his gay lover. So, Nienstedt resigned in disgrace, and, after hiding for a while, emerged at a parish in western Michigan.

Michigan is key because the archbishop of Detroit, Allen Vigneron, is a long-time buddy of Nienstedt. It is very unlikely, given the great notoriety surrounding that case at the time, that Nienstedt would have been permitted to be back in Michigan in any official capacity without Vigneron's seal of approval and willingness.

But in that case, the people at the parish quickly learned the truth about Nienstedt and drove him out of the parish, creating such an uproar that he had to flee. Now, he's living with a former powerbroker priest from Detroit, another associate of Vigneron's, keeping out of the public eye.

But this is how the clerical homosexual network works — they protect their own as long as it's not a kid. But if it's a consenting adult, meaning a male, then have at it. All bets are off. The gay clerics circle the wagons, and we're off to the races. The cover-up machine kicks into high gear, and not a single thing is not expended on behalf of the homocleric.

But rest assured, because the Catholic League's Bill Donohue assures us that the abuse is all over. Nothing to see here folks. Move along, move along.

First, he doesn't know that. How could he? The numbers he points to are from the same bishops who hide their own gay priests from any scrutiny.

Second, even if the numbers are "down" in protecting and hiding and putting a protective shield around gay priests, it is only going to produce more homosexual priests.

In the case of Burrill, he was on staff at the North American College in Rome (NAC), the premier training ground for careerist and future homosexual bishops. The protectors of all this filth are simply setting the stage for more of the same down the road. They refuse to admit that they themselves should never have been ordained. They themselves should never have been admitted to seminary because they are gay.

But back in the day, this is just how things were done, and now, since they are in charge, they don't know any other way of doing things. It's why they never speak out against James Martin. It's why they try so intensely to stifle any criticism (coming almost exclusively from Church Militant because we have their number).

These men don't care about you, God, the Faith or anything.

The U.S. hierarchy is a gay crime syndicate of thieves and cover-up artists who don't give a damn about you. There is no way Msgr. Grindr should be allowed to continue as a priest, much less be set loose upon an uninformed parish.

But Callahan doesn't care. He only cares that his other priest, Fr. James Altman, called out the phony pandemic and said voting for Democrats and their child-killing policies is evil.

That was a bridge too far. Hooking up with hundreds of men on a phone app for homosexuals merits you a parish after the appropriate amount of reflection. But saying the truth? No, we can't have that.

No wonder none of these men believes in Hell. They better hope they're right.

*Correction: Archbishop Neinstedt was head of the St. Paul-Minneapolis archdiocese. 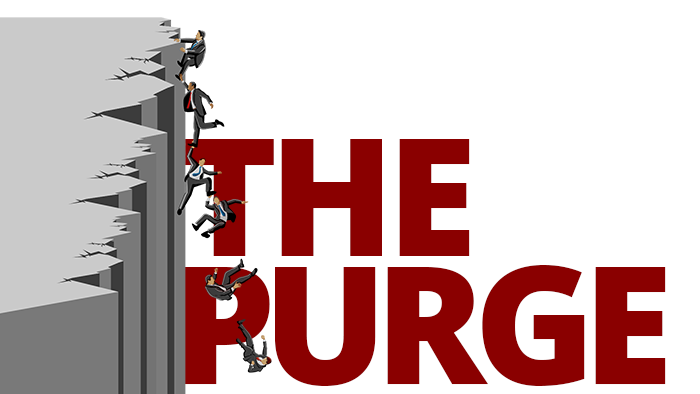 The Purge
One is needed in the Church.