We Are St. John

And the tears are just beginning.

When Our Blessed Lord rounded the path and oversaw Jerusalem for the last time before his entry on Palm Sunday, he broke down in tears and lamentation. He mourned and wept for the city intensely, choking his words out through what must surely have been intense sobbing: "Jerusalem, Jerusalem, you who kill the prophets and stone those sent to you, how many times I yearned to gather your children together, as a hen gathers her brood under her wings, but you would not have it so! Behold, your house will be abandoned, desolate" (Matthew 23:37).

The showdown was coming, and, of course, Our Lord knew how it was going to end. Even though it obviously had one ultimate ending — redemption and resurrection — what was to happen before that brought the God-man to intense lamentation. Remember, it is Matthew who records this episode for us, and he was an eyewitness. Our Lord was not speaking to the Apostles per se. He was speaking out loud, to himself (so to speak), mourning over the city — his own city — that would reject Him, crucify Him and, thus, draw down its complete destruction 40 years later.

It must have been an intense moment, one seared into at least Matthew's consciousness, for him to record it years later. As we see playing out in today's world, "the writing is on the wall," so to speak. For years, religious leaders in the Church have abandoned their duty to bring the authentic gospel to the nations, to the people — and without the divine elixir of spiritual peace, violence and destruction fill the void.

But this violence and destruction is not random, neither the street violence, nor (most especially) the spiritual violence. It has been put in motion by individuals who are in common ideological cause to radically transform the world, and the Church has been co-opted in this work. While Jerusalem (and its coming fate) was the object of Our Lord's lamentation, we cannot ignore that the fate that befell the nation and the Jewish people was brought about by the religious leaders.

It was they who sealed the fate of the people and set in motion the destruction years later by Titus and his Xth Legion. Their unwillingness to accept truth was the signing of their own death warrant. It is not enough to merely sit back and intellectually accept the eventuality of things, or at least what appears today to be the eventuality, without enduring a true sickness of heart over it.

Fr. James Martin and others in the Church are hiding behind racism as a means to advance their own evil.

This is the stuff that disturbs the soul, over which you begin to cry over the coming destruction. Every day that passes, it seems the clouds darken and the treachery of political and, most importantly, spiritual leaders becomes more revealed. They are even making common cause: Men within the Church are plotting to turn Our Lord over to Caesar at the first opportunity.

It is against this backdrop and within this context that last week I used — or more specifically, repeated — a phrase applied to D.C. archbishop, Wilton Gregory (given to him by seminarians and clergy), which, for obvious reasons, I won't repeat. The use of the phrase, the nickname, was inappropriate, and should not have been indicated in the manner that I did. I apologize for that. Again, without repeating it, it is a mixture of two specific things — (1) race and (2) sexuality (with the much greater emphasis on the sexuality aspect).

As anyone who has followed us for any amount of time knows, particularly in the aftermath of the former Cdl. McCarrick homo-predator revelations, one of the major themes we talk about here is how homosexuality within the ranks of the clergy has nearly destroyed the priesthood. When we speak of any member of the ordained class, the individual race or ethnicity of a given prelate or priest has never been a concern, ever. And it still remains a non-issue.

What is at issue is a man's faithfulness and adherence to the gospel and the truth of the Church's teachings. No one chooses his race or ethnic background. But he does choose his response to the gospel, to Our Blessed Lord. Normally, individual moral choices are more or less private, but in the case of leaders, they enjoy no such luxury. Every choice they make to proclaim or subvert the gospel is not only public by virtue of their office, but impacts many souls.

As the saying goes, no priest or bishop goes to Heaven or Hell alone. Wherever his final destiny, he takes 1,000 souls with him. Given the extensive corruption among bishops today, imagine the death toll among souls. To sit back and watch this is devastating: It's emotional; it's angering, it's troublesome — all the above and more, actually beyond words.

Many of these men are betraying Our Lord left, right and center; and like when Judas led the mob to Our Lord and Peter struck out with his sword, cutting off the high priest's servant's ear, so too did I strike out with a sword of words. And yes, even though he struck out of love to defend and protect Him, Our Lord instructed the impetuous St. Peter to sheath his sword. Understood.

But all this is just part of a much larger story — a contemporary conspiracy of religious leaders to betray Our Lord by drumming up false charges so that their own self-serving agenda can be carried out. Racism (while an honest concern, indeed) is not the whole story. For some, it isn't actually the story at all. For them, it's a ruse — a vehicle to smuggle in the actual agenda of acceptance of homosexuality within the Church specifically (and whatever remaining vestiges of the culture have not succumbed to the big, gay, hate machine).

We see this in the person of James Martin, for example, who was quick to denounce my reference to the name applied to Gregory. He was calling for Church leaders to denounce me, yet the double standard here is appalling. On multiple occasions, thousands of faithful Catholics across the country have called on multiple bishops, Catholic schools, and Jesuit superiors to denounce Martin's homo-heresy. Yet there's nary a peep.

And as a brief, partial refresher, Martin has said the Son of God did not fully understand his own mission; repeated multiple times the Church's teaching on homosexuality (as expressed in the Catechism) needs to be changed; stated that the Bible is "wrong" — his words — on what it teaches about homosexuality; openly accepted same-sex-attracted men as "married"; never even suggested that those with same-sex attraction should live chaste lives (and certainly never encouraged it); insists that everyone who is gay is "born that way," with the left-unsaid understanding that therefore, homosexual acts are morally acceptable.

There are many things worse than being racist, and Martin diagnosing a struggling young man as having head problems for trying to be faithful to Christ certainly qualifies!

And that's just for starters. The list of his slyly worded abominations is without end. Anyone who disagrees with his assessment he doesn't think twice about branding a "homophobe." Martin, notice, can call anyone any name he wants. But no word of correction or denunciation for Martin or his ilk from one bishop, university, parish — nothing. In fact, he is celebrated, lauded, pursued for interviews.

And going even further, for any young man who is striving to lead a life of chastity and obedience to the Church's teachings, Martin accuses him of having psychological problems — of not living a "fully integrated life." There are many things worse than being racist, and Martin diagnosing a struggling young man as having head problems for trying to be faithful to Christ certainly qualifies!

Martin and others in the Church are hiding behind racism as a means to advance their own evil. And it most certainly is evil. What spiritual damage does this man knowingly inflict on a young man who, for whatever reasons, finds himself in that spiritual fight? Truly, any priest or prelate who goes to Hell takes a thousand souls with him. So should we sheath our swords when anger gains momentary ascendancy within us as we stare into the depths of tremendous evil? Certainly. Absolutely. Without a doubt.

But that does not mean that the abyss of evil is not real; nor does it mean that an entire civilization is not about to undergo a gigantic upheaval. It is. Recall that, after the betrayal by the Apostle, Judas, the religious leaders had to create a false narrative (two actually) — trumped-up charges — to get their secret desire accomplished. The first was one about religious laws; the second was about sedition and treason. They used popular notions of the day — blasphemy and treason — what people would riot in the streets about, to smuggle in their real ambition, which was the killing of truth.

In the analogy of the Passion, we are today somewhere between the Trial and the Crucifixion. As with all analogies, it falls short of encapsulating everything, but the large points remain — the destruction of a world, the lamenting engendered from that, the proper and improper way to respond, the uncertainty and anxiety over how coming events will unfold, the sheer spiritual exhaustion of it all. Amidst all that, what we do know with rock-solid certainty is whenever the Church mounts Calvary (and it sure looks like much sooner than later), we can never abandon the proclamation of truth, either in witness or word; and, as agonizing as it is to behold and hear the insults and slurs and curses hurled our way, stand at the foot of the Cross experiencing the agony along with Our Blessed Mother.

We are gathered under Peter, absolutely, but we are St. John, after all. What outpouring of supernatural grace had to be received by him to stand there and behold that scene, even as we behold our own version of it today? We too are now in dire need of that same grace, for the Passion is upon us. 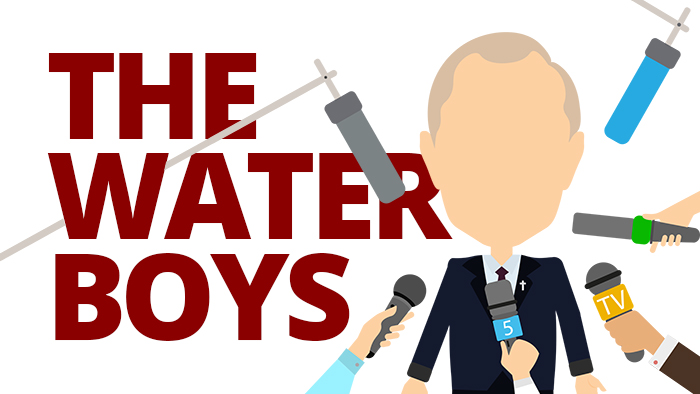 The Water Boys
They keep the crooks in place.