Who's going to replace them?

We are appealing directly to you for your financial help to aid in our expansion so faithful Catholics will be prepared for what's coming. Please donate by clicking on the button.

Pre-2020 election data is now trickling out, and faithful Catholics, as well as other people concerned with a moral society, should be extremely concerned by this. By the time we are all voting in two more years, 10 million Americans will have died. Most of those 10 million will be older people.

According to all the data that has been amassed, two facts have emerged. Older Americans vote in greater percentages than younger people. And older voters in 2016 voted in greater numbers for Trump compared to younger voters.

So if you do a little political calculus and wizardry, here is what shakes out: A large number — millions of people — who voted for Trump will have died — my own father, my dear dad, being one of them.

Seeing as how Trump lost the popular vote by roughly three million, subtracting a few million from his total would have devastating consequences for his re-election. Of course, given the electoral college, the question of where those fewer votes will not materialize is very important.

But remember, in breaking through the so-called "Blue Wall," Trump succeeded by very narrow margins: just 11,000 here in Michigan, a few thousand more in Wisconsin and just 60,000 in Pennsylvania.

Given that millions of voters who voted for him will have since died, those slimmest of margins should be concerning.

Now isn't the time to go into all the political strategizing and virtual scenarios — two years is a few lifetimes in politics. But it is an opportunity to reflect on the changing landscape of American culture, of which politics is downstream.

America is moving leftward. Down on the street, where people live, the country is moving away from objective morality. The fact that Trump won in 2016 and the GOP increased its lead in the Senate this year by a couple seats does not discount that reality.

Where people live their lives — day in and day out — the United States is becoming less and less a moral nation. This will eventually flow into the political river as it always does, and that is what this Vortex is about.

We only mention 2020 to say this may all come to fruition much sooner than many realize. The question for faithful Catholics is this: when the Left does eventually regain political power, will you be ready?

The Left already controls the levers of power in every other institution of the culture — politics will be the next to fall. Are you ready? Because you need to be. Demonization and persecution always begins on a cultural level. But soon after something becomes culturally acceptable, it begins to move into legally acceptable.

Consider for a moment that the leftist Southern Poverty Law Center ripped Church Militant in an article for being so-called "anti-LGBT."

The SPLC is one of the bastions of the Left, and many on the Left — including politicians — take their cues from that evil group.

Does anyone out there think there's no possibility that when the Left regains power, that the SPLC won't be a point of contact, a "think tank" proposing new policies — policies that say any group which decries abortion or sodomy should be fined for being a "hate group" or have tax-exempt status removed or denied access to the internet or be officially designated as a danger to society?

Let's face it, the Left grew complacent and Trump slipped in the back door. It was the perfect storm for them and a moment of grace for faithful Catholics, a respite from the promises of a crazed candidate screaming that religious teachings would have to change.

For example, when Hillary said these words in 2015, many people woke up: "Deep-seated cultural codes, religious beliefs and structural biases have to be changed."

The question instantly arose: how? How will they be changed? Coming out of the mouth of someone running for president, those are very troublesome words. But faithful Catholics should not delude themselves. As we said earlier, many who know exactly what she meant by that are no longer with us — in their place, a younger group who know little about morality, understand less about its relation to politics and base their own understanding of both on how they feel.

Not everyone who voted Hitler into power were bloodthirsty Jew haters — many were just ignorant or indifferent. Hitler promised bread and circuses, the state that would satisfy every need and desire, and many voted for him.

There's no difference today between the Left and 1930s German National Socialists, nor the 1920s Bolshevik Socialists. And that is precisely why the faithful should be concerned. The Left is the Left in whatever country and whatever decade, and the common denominator is the eradication of God and the replacement by the state.

When that time arrives here in the United States — and it is coming — will you be ready? Will you have sufficiently instructed your children in the Faith? Your grandchildren? Your friends?

This is the purpose of Church Militant, to help you in the spiritual battle every day, and when that battle spills over into the streets, you will have built up the strength to respond and thrive.

Satan has been extremely successful at diminishing the Church from within. He has whittled down the number of actual faithful Catholics to a small percentage. And the relatively few who remain will become the target of an increasing chorus of politicians and educators and entertainers and cultural elites.

Vigilance — vigilance and perseverance are needed. The lack of those is how we are where we are as a culture and a church to begin with.

Given the chaos in the Church, given the growing storm in the culture, Church Militant needs your support more than ever before.

Please donate to our expansion campaign. 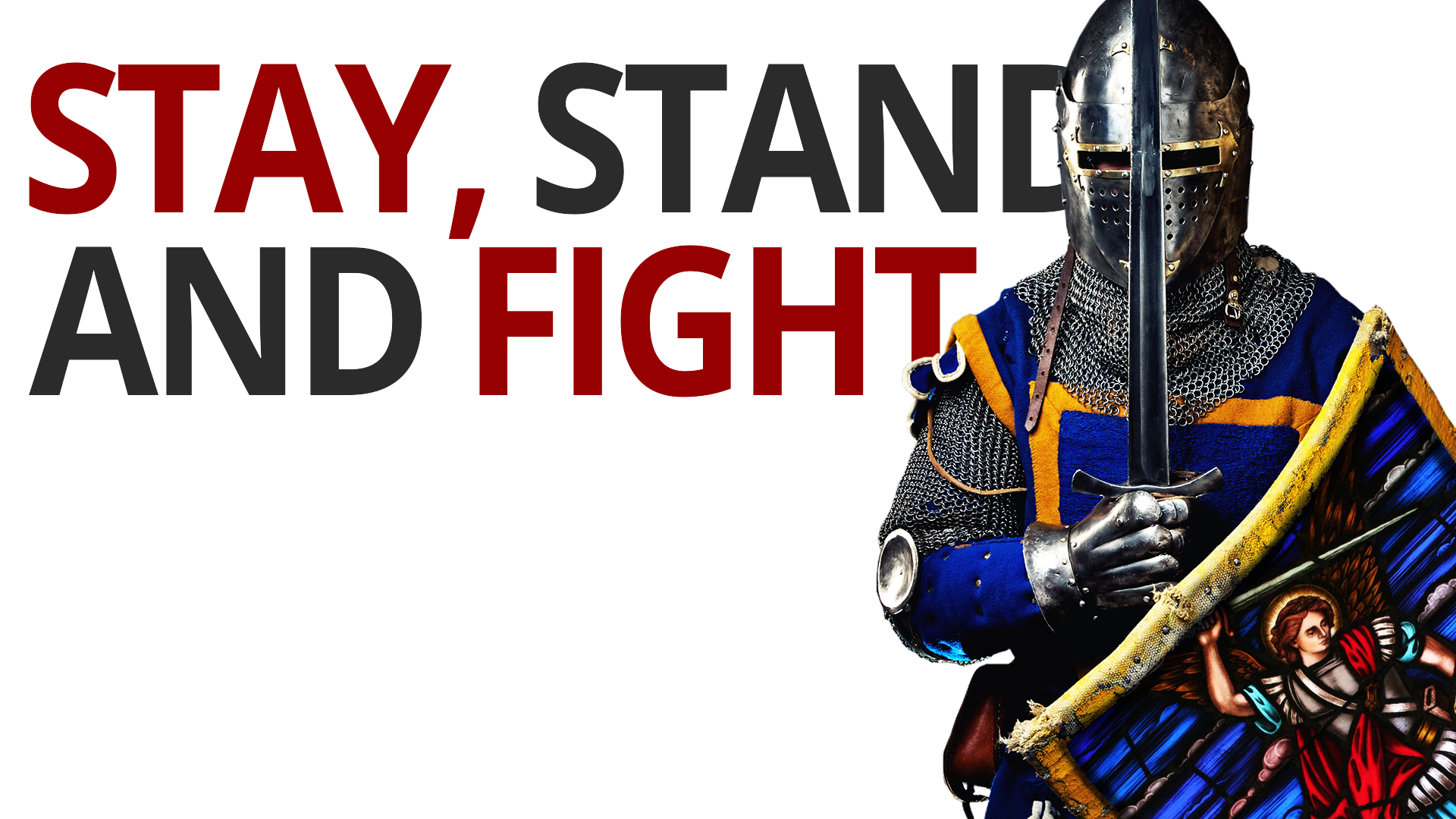 Stay, Stand and Fight
What else would a loyal son of the Church do?