A ‘Bridge’ Too Far

I'm Michael Voris coming to you from Rome in the last couple of days of the Youth Synod, where reports are now predicting something rather remarkable.

It's not over until the Holy Spirit is done singing, but there appears to have been what could be described as a last minute de-railing of the homo-train here at the synod, as it looks like the Pope himself has slammed the brakes on the whole affair.

The final document to be voted on this weekend was, by all accounts, full steam ahead, and many reports saying, indeed, it had already been written by the homoheretic crowd and much of what was being seen here was all for show — that the homoheretic cardinals and bishops who have rung up a series of victories these past few years were within an inch of presenting the appearance that the Church was going to embrace homosexuality.

But suddenly, seemingly out of nowhere, the train came flying off the tracks as the Pope himself appears to have stepped in and quashed this spiritual madness.

Specifically, what is being talked about — as it has been for months — is the inclusion of the specific acronym "LGBT" — four letters that carry a powerful wallop of ideology.

It more than suggests that first, people are born that way, and two, this is their identity, the very core of who they are, what defines them.

But that was on June 19. The very next day, the news of homosexual predator Theodore McCarrick broke, and the Church descended into what was termed its "Summer of Shame."

You know the rest from that point on: cardinals lying saying they didn't know anything about it, charges and reports coming from seemingly every corner of the Church of not just McCarrick but homosexual predatory behavior in seminaries everywhere in the West, the Pennsylvania grand jury report, Donald Wuerl being swamped in the ensuing melee and having to finally resign, multiple calls for investigations of bishops and cardinals, 15 states — with more on the way — as well as two federal Justice Department investigations into all of this evil, hundreds of lawsuits, state legislatures beginning to pass laws lifting the statutes of limitations so every single victim can come forward and sue, open discussion from Catholic social media and faithful Catholics demanding an end to the gaying of the Church, everywhere, good priests being persecuted inside the Church for the fidelity to the Gospel — and on and on and on.

It has been nothing less than a whirlwind — a vortex — of relentless news about the problem of homosexuality within the clergy and the promotion of it by heretical-minded ideologues who have had blinders on to everything going on in their rush to normalize the evil.

The truthful and accurate explosive testimonies — three of them — by Abp. Viganò in the past two months, pointing a finger directly at the evil of homosexuality within the clergy and their desire to pervert the Church and Her teaching — all of this, every bit of it, combined, has created a storm of such magnitude, such alarm and attention that it appears the possibility of a final document appearing to give some kind of approval to homosexuality was just a bridge too far for Francis, apologies to James Martin.

Somewhere, in his soul, or mind or calculations, for reasons unknown precisely, it seems the Pope discerned this can go no further, and it has ended.

The Pope himself has not come out and said this, but some of the cardinals closest to him — some of the very ones who had been the big gay cheerleaders — have suddenly begun talking about preserving Church doctrine and not changing any wording in the Catechism.

They would not do that, especially given their history on all this, without the Pope having stepped in. And speaking of stepping in, a Pope never intervenes in the drafting of the final document at a synod.

The entire point is for the synod fathers to prepare a document for his consideration after all their work is done for him to then review, not help prepare.

No less than the official Vatican newspaper itself, L'Osservatore Romano — reported that as the final document was being drafted this past Monday evening, Pope Francis himself was present and took part — that never happens.

Two heavy-hitters in the Pope Francis circle — Philippine Cdl. Luis Tagle and German Cdl. Reinhard Marx — subsequently came out at a later press conference this week and seemed to completely rule out any possibility that the term LGBT would be anywhere in the final document.

All of this is a spiritual and political earthquake in the Church, a crushing defeat for the James Martins of the Church.

On the purely natural level, there wasn't one faithful Catholic who, at the start of the synod, didn't see exactly where all this was headed: the embrace of homosexuality by the Catholic Church, or at the least, the appearance of it.

And there it was, all the preparation was in place — even in writing — in the official lead-up document on Church letterhead — everything had been made ready. All that was needed now was for the circus of a synod, using young people to give the appearance that it was necessary to talk to the world to adopt the world's approach.

Nothing was going to stop them — that was June 19.

June 20, the reality of all this evil began to unfold and unravel and be dragged into the light, and Church leaders who have permitted this and covered it up and promoted it are beginning to have to deal with the massive, massive consequences of all of it, which will drag on for years.

Of paramount importance — which is why we are addressing it last — the tens of millions of Rosaries and pleadings of the hearts of faithful, discouraged, near-despondent Catholics crying and pleading to Heaven to save the Church from all this evil. Nothing was more important than this reality. The vortex of everything being exposed has been brought about by Heaven answering prayers.

The fight is not over. It's never over in this life, but if this all works out this weekend at the final vote on the document the way it looks like it right now, this is a severe blow to the demon in his pride to further corrupt the Church.

Of course, people who experience same-sex attraction deserve compassion and respect and love in their day to day struggle — as does every person — but it is wicked and un-Catholic to limit the view of a person — any person — to reduce them to their "issue" — whatever that issue is — denying the glory of their fullness as a creature made in the image of likeness of Almighty God by God Himself.

That is what the term LGBT does, that is what it is intended to do and that is why the Church can never adopt it.

It's kind of weird to give the final word of this Vortex on the eve of tomorrow's vote by quoting — of all people — Cdl. Marx — extremely close to the Pope.

But he came out publicly two days ago, after the Pope showed up, and said the following of the term LGBT: "We must not allow ourselves to be influenced by ideological pressure, nor to use formulas that can be exploited."

You heard that correctly.

Reporting to you from Rome, the day before the conclusion of the synod, this is Michael Voris for Church Militant. 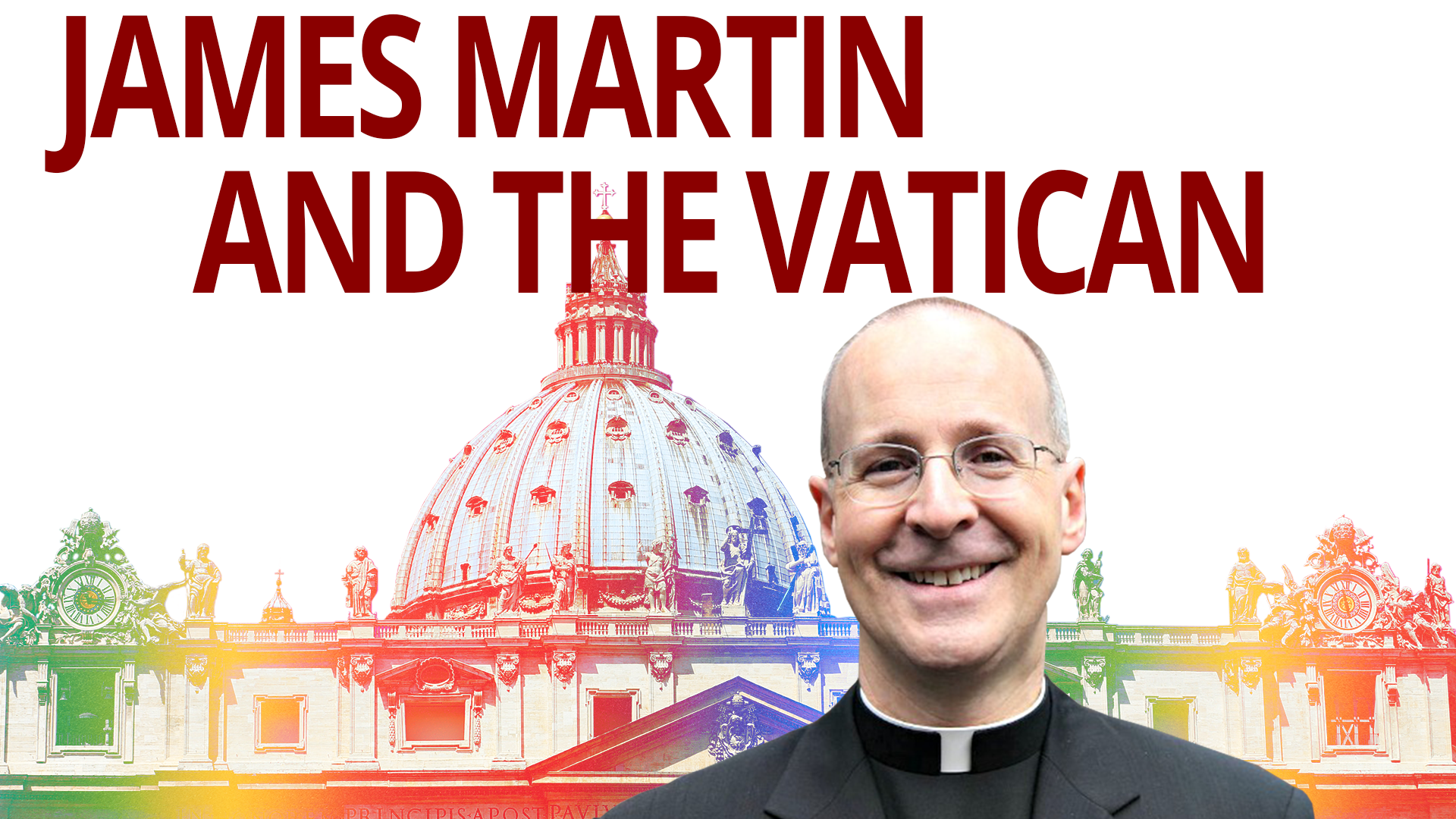 James Martin and the Vatican
He's lying and they let him.