Apologies to all cesspools.

The U.S. hierarchy is one step above a cesspool — barely. One of the more obvious candidates to associate with cesspools because he stands out for their odor is El Paso, Texas bishop Mark Seitz who never misses a chance to pretend he's holy and caring, even at the expense of millions of dead children.

He famously knelt down holding a BLM sign, even after it had become clear that BLM describes itself as an organization bent on destroying Western civilization and championing homosexual perversity as normal. That had been on their website until they finally took it down, being busted and all for their true motives.

But nope: That didn't stop the woke Seitz from carrying on like a traitorous Catholic. In former times he would have been burned alive for heresy. Come to think of it, perhaps this is why Pope Francis and his gang are so determined to eliminate the death penalty.

Seitz is a straight-up communist. He wants to be a part of the ushering in of a new world order. So he does what every communist does: He lies and distorts and confuses. He says in an essay he wrote for — of course — fellow heretic Jesuits in America Magazine that those fighting for lives of the unborn are single-issue voters and have damaged the Church. Specifically, he says pro-lifers have "harmed the credibility of the commitment of Christians to the common good and compromised the integrity of our gospel witness."

It's especially galling that liars like Seitz, hiding behind a torrent of platitudes and high-minded principles about helping the poor, fail to see that the poorest of the poor are the ones who can do nothing — not a blessed thing — to protect their lives inside the womb.

He begins his syrupy essay recalling a chance meeting with a migrant at a staged political event at the border. He recounts for us her travails — which, no doubt, are real — and how she and others like her are somehow the moral equivalents of children being hacked to pieces in a swirl of blood every 30 seconds in America.

Seitz is a straight-up communist.

The other? She lives to fight another day. The moral blindness of the men in miters is beyond description. There is truly something so morally sick, demented, twisted inside them that it's impossible for them to see the clear difference.

Seitz even quotes Pope Francis saying the situations are equal. That's so blind it's repugnant. Or is it blind? Is it rather not choosing sides with fellow Marxists to advance a world cause? We know, for example, from Italian media reports that George Soros was instrumental in funding the pope's 2015 trip to America.

We know that Pope Francis diverted a half-million dollars from the Peter's Pence collection in 2018 to help fund the migrant caravan to the U.S. border — another venture funded, in part, by Soros. We know with reasonable certainty from various media accounts that the Vatican secretly funneled a huge sum of money to Hillary's campaign in 2016, perhaps approaching a million dollars.

The author Henry Sire, in his book Dictator Pope, outlines a vast web of corruption, all surrounding this Marxist agenda. He recounts how Pope Francis was furious that Trump had won and let his feelings be known among certain high-ranking Curia members.

Their globalist plans were completely thrown into chaos and would now have to be reconnoitered. That's the "deep Church" we talk about all the time. If these men truly believe immigration is equal to child murder, then why do they never fund anything to bring a halt to the slaughter?

The answer is because they really don't believe the two are equal — not at all. One they tolerate because it weaves into their larger plan. They just have to pretend they care so they can carry on with keeping up appearances — appearances that they are good men, men of God, who want the best for all humanity, without any regard for themselves.

Just like the Pharisees had a real regard for peace in Israel, for the good of the nation, even if one man had to perish. And of course, it never occurred to them in the slightest that they would profit from His death personally, or so they thought — exactly how personal profit never occurs to the hierarchy in making their political choices known.

These men are truly disgusting to behold — draped in the robes of their office — it actually turns our stomach to look at most of them. A bunch of conniving, socially awkward, out-of-shape, limp-wristed, middle-management bureaucrats content with counting their shekels while thousands of children are torn to shreds in the womb every day — and that's just in America.

"But oh, look at us, virtue signaling how wonderful we are. Other people suffer also, and if we help those people, we get all kinds of money from the government. So yes, all this is equal, but not really." Ruth Bader Ginsburg died and had millions of children at her judgment testifying against her. But she was not a successor of the Apostles.

He is a bishop. He is a successor of the Apostles. He's just a fraudulent Catholic. He is a lying, deceiving fraud, like many of his "brothers" who have to keep declaring bankruptcy because they can't keep up with all the lawsuits from the thousand of boys who were raped by their priest and bishop friends (rapes which were subsequently covered up).

They care nothing about children, the cheats.

Getting Biden elected is job one for a huge number of these "men," so they can once again raid the nation's piggy bank for lucre while pretending to care for "the poor." If you cared for the poor, truly, you'd protect the children in your care — born and preborn — and you have billion of dollars available to you to help with all of that.

Instead, you've squandered the Church's wealth, sued insurance companies who rightfully refuse to pay settlements for your sins and given $4 billion to your attorneys and victims. But hey, bishop — all these lives are equal, right? Each is a concern to you, right?

Then why do you only talk about the ones you can make a buck off? You want Trump out because he upsets your status quo, because he is draining the swamp and you're all being exposed for the crooks you are: Spiritual terrorists.

And in his place, you'll accept a child killer and his anti-Catholic, bigot running mate and pretend to idiotic Catholics (made that way by you) that there is a difficult choice here.

On the one hand, we have someone temporarily unemployed, and on the other hand someone permanently dead. Yep, that's a "very confusing choice." Wait till the lot of you die. Just wait. But then, you don't believe anyway, so you'll have to find out then — when it's too late. 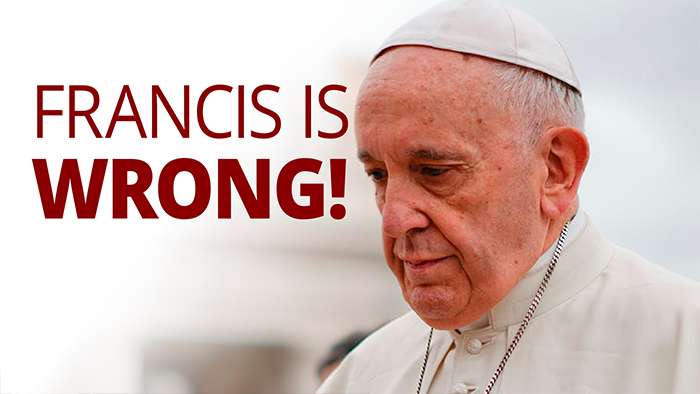