From the Son of God.

Merry Christmas to you from all of us to all of you and your loved ones.

Lots of people are traveling these days. Have you ever witnessed the scene at the airport, for example, where two people, intensely excited to see each other, hug so tight it looks like they'll damage each other's spines?

It's always touching — and telling — that joy-filled moment.

People hug really hard as though they would pull the entirety of the other person into them, fuse together, form an unbreakable union; so intense that they would practically be the same person, almost indistinguishable.

That's what you are looking at when you look at the manger, a union of the divine and human, God "hugging" humanity so closely, so strongly, that in this case, they are fused together inseparably — the God-Man, the Man-God.

And this is precisely what is going on when we receive Holy Communion. Our Lord was born and placed by His Holy Mother into a feeding trough.

He was born in Bethlehem, a town whose name translates to "House of Bread." He would later in life call Himself "the bread of life."

And He would instruct those who He loved, and wished to be united to forever, to eat Him. Speaking naturally, on the natural plain, no one can be absorbed into another.

No matter how deep the love, no matter how intense, two people cannot fuse together. The closest we have to this is the marital act, where the two become one flesh. But even there, physical separation occurs — and eventually death.

Yet this babe we celebrate joins Himself not just to human nature, but to specific humans, actual persons.

And He continues this act, for this is what lovers do. They desire to never depart, and in the case of this lover, He does never depart, even physically; because with God, all things are possible.

The divine food laid in the trough was born to not just die, but in dying, to be for us, the bread of angels, supplying an avenue for us to be forever united to Himself.

The Blessed Sacrament is, in the last consideration, the supreme act of love, but in order for us to be physically united to Him, He had to become physical, material, touchable, consumable, unitable to our bodies, our flesh.

Divinity could not be transported through our veins, pumped through our cardiovascular system, pushed along by our beating hearts, unless the God who created those hearts for Himself would first unite Himself to our flesh.

In so doing, He fashioned, willingly captured His divinity in human DNA and then, becoming our food, passed His divine DNA onto those He loves most in the world.

And unlike the marital union, which does cease at death, physical death for those who were united to Him in this life in the body will have their mortal bodies raised again — perfected.

For while the bread of angels does sustain those in this life who are properly disposed to receive Him, it is also a preparation of our fallen flesh to be elevated into everlasting glory.

This is precisely why at Capernaum, when speaking of Himself as the bread of life and the necessity of eating His flesh and drinking His blood, He said, "He who eats My flesh and drinks My blood abides in Me, and I will raise him up on the last day."

What you see before you laying in the manger, the bread in the feeding trough, will be the source one day of your own glorified body made ready and prepared for everlasting glory, a glorified body.

When you go up to receive Holy Communion during this Christmas season, the Lord and King of the Universe is giving you a Christmas hug, and He means to never let go.

May the Babe of Bethlehem grant you and your loved ones the most beautiful graces this holy season.

From the entire Church Militant family, and from those of ours who have passed into the Church Triumphant, God love you. 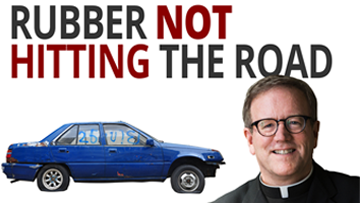 Rubber NOT Hitting the Road
Barron theology fails once again.