‘A Gold Mine’ of Abuse

One of the tragedies among many resulting from the invasion of modernism into the Church — blossoming in the aftermath of the Second Vatican Council — is the reaction from some faithful Catholics.

Since it was the celebration of the Mass itself that was the most obvious change that occurred in the Church 50 years ago, many Catholics reacted by clinging ever more tightly to the Old Rite, the Traditional Latin Mass. Various groups sprung up that essentially placed all their eggs into the basket of the Traditional Latin Mass — the most notable probably the Society of St. Pius X, commonly known as the SSPX.

In 1988, concerned that the Society, dedicated to the ancient form, would die with his death, the leader, Abp. Marcel Lefebvre, disobeyed Pope John Paul II and illicitly consecrated four bishops who would carry on the work of the Society after his death. All were immediately excommunicated and their act deemed schismatic by John Paul.

In the intervening decades, the Society has dug in its heels, forming its own hierarchy, marriage tribunals, seminaries, chapels, schools, communities and administrative arms — none of which answer to the jurisdiction of Rome.

The scale of the scandal almost dwarfs the homopredator clergy scandal that has erupted for the past 20 years across the world.

In this structure, many of the SSPX laity who are unquestioning of their clergy would never demand accountability from them. That has created an environment within the Society itself where abusive clergy can easily take advantage of children, young males and women.

There have in fact been so many cases of abuse that the Society itself has been the target of a statewide criminal investigation in Kansas. The small community of St. Mary's Kansas, a main hub of the SSPX, is the focal point of investigators' probing.

So far, the investigation has unearthed not only multiple cases of abuse by multiple priests who either are in St. Mary's or have passed through the community, but even more disturbing, a worldwide cover-up of the sexual assaults by the leadership of the Society.

In fact, given the numbers of abusing priests, the number of victims and the number of leaders involved in the cover-up, the scale of the scandal almost dwarfs the homopredator clergy scandal that has erupted for the past 20 years across the world.

In 2000, a young man in Topeka, Kansas — Michael Gonzales — a former student at the SSPX school in St. Mary's, Kansas, blew his brains out — unable to cope any longer with the effects of being raped by an SSPX priest. That priest is roaming about freely, even with privileged status, despite being named in young Michael's suicide note.

In fact, story after story that Church Militant has become familiar with over our three- to four-month Spotlight investigation, the patterns repeat with frightening regularity.

Abusive clergy — their abuse known with certainty by leaders and administrators — are simply moved around and sent right back to schools and chapels and seminaries with no one being able to question anything without being told they would be committing a mortal sin.

In this area, the SSPX has severely abused any spiritual authority they think they have, hiding behind the rituals and professing a greater loyalty to the Catholic faith than other Catholics they sometimes hold in disdain for attending Novus Ordo Masses. But the loyalty to the Faith, for not a few, is only ritual-deep.

Once Church Militant had discovered the pattern — again, internationally spread — we contacted the SSPX and asked for comments.

In responding to our inquiries, they did not realize they accidentally copied us on their internal e-mails — e-mails that reveal fear Church Militant would come to discover what the Society itself, in those e-mails, termed a "gold mine" of abuse and cover-up.

James Vogel, the lay communications director for the U.S. District of the SSPX as well as editor-in-chief for the Society's Angelus Press, counsels senior clergy that it would be bad if they said nothing in response to Church Militant's probing.

Here is one of the relevant lines from his e-mail — an e-mail, remember, that he and they thought was a private communication between them about the specific case we were asking about — a priest who was an abuser being transferred to another assignment within the world of the SSPX: "We can admit he's been placed under restrictions, but I still think MOST people will find it bizarre he is allowed to teach/run a school under the circumstances."

Uh, yes —most people would absolutely find it bizarre, because it is.

The Latin Mass, on its own, is no guarantee of being preserved from the influence of the diabolical.

But the trove of private e-mails, where they freely admit Church Militant doing this investigation is going to be a big problem for them, reveals a stunning admission: "Whatever we say or decide, it will not end with Fr. [Pierre] Duverger; [it] will be a veritable 'gold mine' for them."

A private communication freely discussing and admitting that the abuse cases and accompanying cover-ups "will be a veritable gold mine" is an earth-shattering betrayal of trust to the Catholic laity who placed total trust in these men.

In one section of the e-mail string, Vogel and his superiors go back and forth, almost nonchalantly, about all the abuse cases and cover-ups in France, worried that Church Militant already knows about them, but deeply concerned that a Church Militant investigation will surface the same sordid history here in the United States.

Across the United States, indeed across the world for years, former employees have been fired for approaching leadership about abuse cases; victims have been told point-blank not to go to police; SSPX priests have been sentenced to hard time; abusive priests' crimes have been hidden from laity at their new assignments; and there have been suicides, wrecked lives, children placed in danger, families destroyed or broken up — an abuse of spiritual authority on a grand scale.

Undoubtedly there will be some followers of the SSPX who will dismiss all this as lies, and propaganda, and hate and vitriol. They will be so blinded by their adherence to the Old Rite, that they will excuse or dismiss the suicides, broken vows, destroyed families and enormous cover-up. But hopefully, others will emerge from the shock and begin demanding accountability.

Many of these cases are a matter of public record: trial courts, prison sentences, successful lawsuits, with even some laity — fathers of families in SSPX chapels — today sitting behind bars for sexually abusing their own children, and SSPX priests initially covering it up because the men were large donors.

A love for the Latin Mass — yes, in the midst of meltdown of the Church — does not and should not excuse these monstrous crimes and more importantly, a culture of cover-up. Laity who attend SSPX chapels are not immune from the consequences of fallen human nature because they prefer Latin Masses. In fact, that love for the reverence and awe of the Old Rite has actually been turned against many of them to hide crimes and cover-ups.

The Latin Mass, on its own, is no guarantee of being preserved from the influence of the diabolical. The Church, remember, fell apart at the same time the Latin Mass was the only game in town, so to speak. Every Vatican II father had been raised in, ordained and consecrated in the Old Rite, and they were the ones who allowed things to go completely off course, laying the groundwork for the rotten fruit we see so evident today.

Our Spotlight investigation is not about theology, or supplied jurisdiction, finer points of canon law, or rehashing old arguments that still need to be settled about liceity and so forth. It's about accountability for leadership that has taken advantage of many well-intentioned Catholics — manipulated by them to believe that sexual abuse and cover-up could never happen in the Society. Not only can it, but it most definitely has, and still is.

Just ask 26-year-old Michael Gonzalez, who put a pistol in his mouth and blew his brains out — that is, if you could ask him. But you could ask his rapist, stashed away in Italy, identified in Michael's suicide note.

We know it will be hard to watch our Spotlight, available by just clicking on the provided link.

Many SSPX adherents are well-meaning Catholics who are only looking for an escape from the evils that have befallen the Church. So too was the family of young Michael Gonzalez. 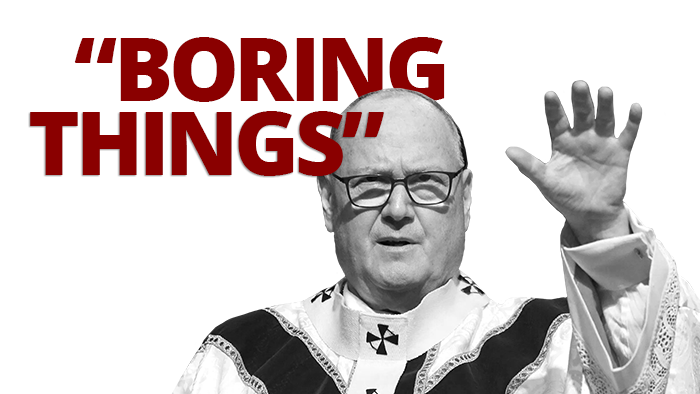