Of business as usual over at the Church of Nice.

Speaking of falsehoods, we have a great example in a follow-up report to one of our investigations into sneaky doings over at the Church of Nice, brought to you — again — courtesy of the archdiocese of Detroit.

You will recall last week we told you about a plan by the archdiocese and Abp. Allen Vigneron to stash all the real estate property in a newly created non-profit controlled exclusively by the sole member: the archbishop.

Once Church Militant published the ongoing plan, what do you know, the secular media picked up on it because, well, it's newsworthy.

We ran our story in The Vortex last Monday, and by Friday, here was the Detroit Free Press article — and not just any little old article, but the front page, big font, above the fold article. That means the secular press not only thought it was newsworthy, but really newsworthy.

Shifting billions of dollars of assets around to shield them from potential liability suits seems to be, actually, a pretty big story. Just as a quick recap, the archbishop had the largest, most expensive law firm in the state of Michigan set up the non-profit for him in March, as you can see on the official state documents.

Then, according to the meeting notes from his presbyteral council, he told them all about it in May, two months later, as you can see here.

And by the fall, if not sooner, practically every scrap of land the archdiocese owns had been dumped into the newly created non-profit - free and clear, off the table, completely protected from any potential large jury awards - at least until the whole thing would go to court in some explosive test case down the road.

So the Detroit Free Press called the archdiocese after the Church Militant story was published and said, hey guys, what's up? Why you stashing away billions on real estate holdings? Why didn't you tell your parishioners that are really upset that they were kept in the dark?

They spoke to the deflector-in-chief himself, Comms Director Ned McGrath, whose answer is a perfect example of everything wrong in the establishment Church. When asked by the Free Press, here was his "nothing to see here, folks" answer: "He said U.S. dioceses had been encouraged by church leadership to make such a change as far back as 1911, and timing has nothing to do with concerns over lawsuits, which have already cost the church billions of dollars."

So almost 108 years ago — more than a century — Church leadership had been encouraging this, so we just decided to get around to it now.

They say the Church moves in centuries, but this is ridiculous. Here's another quote from the article: "The Archdiocese of Detroit started moving toward parish incorporation about 11 years ago, but McGrath said the Great Recession and other factors got in the way."

That was back in 2008. Now it's almost 2019. Perhaps someone needs to inform Ned McGrath, spokesman for Abp. Vigneron, that the Great Recession has been over for a good while now and they could have put this back on the to-do list any time they wanted. But there are two stories here, two different transactions.

One is the dumping of real estate assets into Mooney Holdings; the second is the next phase, which is the incorporating of each individual parish as its own stand-alone entity — again, potentially protecting the archdiocese from any future large jury awards in sex abuse lawsuits down the road.

The second issue is what Ned is talking about — not the first. While they are related, they are distinct.

So Ned's response, speaking for the archbishop, amounts to, "Oh, this is something (the individual incorporating) the Church in the United States was supposed to have done 108 years ago. We're just getting around to it now."

Well, that's correct — sort of. The claim that more than a century ago, the Church wanted this done is true.

It's just that the crackerjack, johnny-on-the-spot prelates for the past century just dragged their feet.

However, McGrath tries to deflect — unsuccessfully tries to deflect — when he says this has nothing to do with government raids and lawsuits and so forth emerging from various homoclergy cases — some of which he helped cover for.

Why on earth, after more than a century, would the archdiocese of Detroit suddenly get a burr under their saddle and say, "Better get on this, boys, it's been a hundred or so years"?

And for the record, that's just the second issue, the private incorporation of each parish. Canon law does not say to form a non-profit entity, paying the largest most expensive law firm in the state to file the paperwork, and then dump all your land holdings into it.

These are two different issues, not one — same goal, but different tactics.

Ned denies the moves by the archbishop have anything to do with hiding or shielding assets, but the claim is a little outrageous given the current climate. He says the archdiocese had no idea seven months ago when it established Mooney Holdings that law enforcement was going to serve search warrants and raid chanceries just two months ago — again, technically true, but made, as yet, another cover statement.

He's covering that the incorporation happened within a week of the Michigan State Legislature considering changes to the statute of limitations for lawsuits against the archdiocese — dump all the assets while you can into Mooney before it's too late and the archdiocese has to pay victims!

Also the McCarrick news had not yet broken publicly — that happened in June — it was already being talked about in establishment circles because the now-adult male that McCarrick had molested 40 plus years earlier had reported it more than a year earlier.

So the news, inside the Church, among the hierarchy — was already spreading, and it only stands to reason that alarm bells would have been going off. A little forethought about protecting assets is all that would have been necessary to get the 108-year-old ball finally rolling.

Ned McGrath has a history in his role as communications director of lying and deflecting when it comes to protecting malfeasance in the archdiocese of Detroit. He lied about the Dignity Masses in Detroit back in the 1990s, covering for then-Cdl. Maida.

He lied about Maida's involvement in the case of the notorious pederast priest Gerald Shirilla.

He was part of the case of Fr. Thomas Kaiser, no longer a priest in active ministry, being sued for predation of a seminarian, being hired by a school without the school's knowledge.

And now, he tells the Free Press that the archbishop finally decides to get around to doing what the Church in the United States was supposed to do over a century ago and that the current homopriest crisis — with potentially huge jury awards — has nothing to do with it — Ned; Ned, Ned, Ned. And the Church of Nice just can't seem to grasp why people don't trust them.

And by the way, don't forget, sometime early next year, Abp. Vigneron is going to roll out a $200 million fundraising campaign because they got to get as much as they can before the old Catholics — which is just about all that is left after 60 years of the Church of Nice — all die off.

Maybe Ned can get the next press release ready for that and say it was all planned 100 years ago as well.

Instead, maybe Ned can start unleashing the truth! Ned, why did you not tell the one million plus Catholics you were dumping Church assets into Mooney Holdings and then only address it months after the fact when you were caught and exposed?

You've known about this for approaching a year and clearly had no intention of going public with this, as evidenced by the absence of any press release over the past 11 months.

You play it off as no big deal only after our Church Militant story prompted a call from the secular media. It's disingenuous — in the least.

All part of the ongoing scandal, corruption, dishonesty and so forth, brought to you by the archdiocese bringing you the phony "non-Catholic" evangelization program Alpha and the riveting, Protestantized Unleash the Gospel initiative.

Yep — deception from the chancery, Protestant catechism disguised as Catholicism and a bunch of joyful missionary disciples tromping about the archdiocese. What could possibly go wrong?

How long before the Cdl. Dearden boys are all gone; how long, Lord? 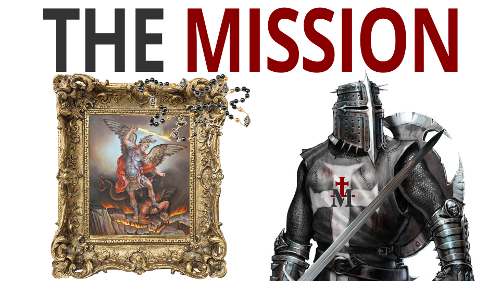 The Mission
It never changes — but sometimes the method does.