And it's a good thing.

As you know, Church Militant is always helping you understand the connections between the culture and the Church, the crossover between both worlds. Those two worlds parallel each other in many ways — they're practically mirrors. And, theologically, it makes sense. As Bp. Sheen used to say, the world is the theater of redemption: It's where the great spiritual war rages.

So as we look out on all of this, we see something happening in each arena. There is a great realignment occurring, in the Church and in the culture. In many ways, the old labels, which used to categorize things neatly, no longer apply. Consider, for example, "conservative" and "liberal." There's so much confusion over those classifications — especially liberal — that no one really knows what they mean.

The old labels are so ineffective at describing the new realities that, oftentimes, you find adjectives popping up in front of them which pretty much redefine them. So the old word is used, but there is a totally different meaning behind the word.

We no longer have just Catholics, but 'CINOs': Catholics in name only.

And, of course, we have not just Catholics but "cafeteria Catholics." All these adjectives are now necessary because the terms no longer mean what they used to mean. All of this redefining is going on because there is, underneath it all, a massive realignment going on — in the culture and the Church.

In the political world, Donald Trump has become the symbol of all that, not to mention also a precipitating cause. Tens of millions of Americans were beginning to sense a political shift, a new paradigm emerging where they, as individuals, no longer mattered.

They sensed correctly that the world they knew was being buried under a mountain of globalist Marxism. In the Church, faithful Catholics likewise sensed a major shift happening. They couldn't put a finger on it, but they knew something was up, something was off.

So they began realigning themselves, leaving the Church of Nice and hunting out the actual Faith. It's like a Catholic version of the Walkaway movement that is rippling through the Democratic Party — a movement of Democrats who have woken up and realized the party no longer represents them. And so they are walking away from it.

The Marxist Left, up until the arrival of Donald Trump, was able to keep the truth of its agenda under wraps.

People are choosing sides, and in that choosing up sides, some people are waking up and realizing that the folks they thought they had a lot in common with, they really didn't. So they cut ties and are establishing new ones.

Now, some people find this upsetting. They bemoan the division, they lament the lack of unity. Frankly, that's a stupid response. There can be unity only if it's a unity around truth. In fact, this entire realignment is about the truth.  Some waking up to it, others wanting to destroy it.

But truth is the cause. When truth is present, there are only two responses. It is either embraced or raged against. The Marxist Left, up until the arrival of Donald Trump, was able to keep the truth of its agenda under wraps, to conceal the truth.

But now, it's all out there. Nothing is hidden. And people are making choices. And that's a good thing. Even on the side of evil, it's good to know who's who. For Catholics and other Christian denominations — remember, this is how things will be at the end of the world. Truth will cause one great, final realignment — and it will be final. 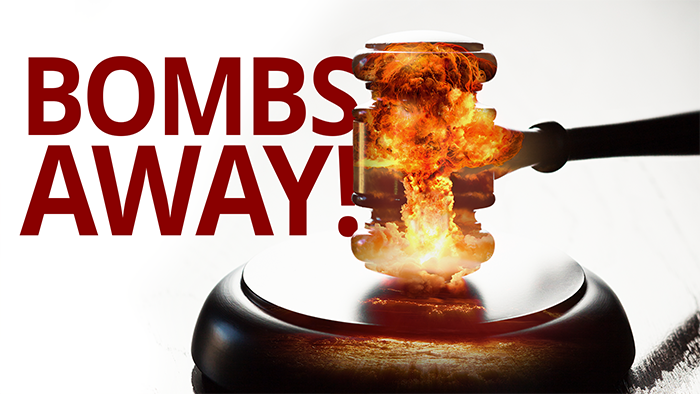 Bombs Away!
Now it's getting real.