There is an evident and shameful double standard when it comes to U.S. bishops' response to various bishops and priests who are under investigation for sex abuse or cover-up. The bad guys get a pass, as though nothing happened, and other ones get treated, well, differently.

In fact, various priests — and for that fact, bishops who get unfavorable attention — are slammed almost immediately and removed from the scene, while others who are better "connected" get a press release, and then it's back to business as usual.

Take, for example, what was on display at last month's annual Mass for Life at the National Basilica in Washington, D.C.

Take a close look at this video from the Mass' opening procession. Right there in the thick of the line is Msgr. Walter Rossi. Why does that warrant any attention? Because Walter Rossi is under formal investigation in his home diocese of Scranton in conjunction with the archdiocese of Washington, D.C. Why is he under investigation? Because he is accused of hitting on male students at Catholic University of America.

Rossi is a Scranton priest who has been "on loan," so to speak, to Washington, D.C., where he is rector of the National Basilica. Multiple charges of preying on male college students, however, are apparently not enough to cause his superiors to insist he step aside and get out of the public. No, in fact, his presence in the archdiocese of Washington, D.C. makes it appear as though nothing has happened at all — no charges, no investigation, nothing.

But there is an investigation. And because of that investigation, he had to step down from his role on the board of directors at Catholic University.

While that's a big deal in some circles — those circles are very small, Catholic academia — for the rest of the Catholic world, it looks like a big nothing-burger. That's because Rossi is still sashaying down the aisle of the basilica very close in line to — wait for it — Donald Wuerl, also in line at the Mass for Life — again, just as if he never lied about what he knew about McCarrick, and just as if he had no part in the cover-ups during his time in Pittsburgh.

It's just as if he never lied at the funeral Mass for one of his Pittsburgh priests who had extorted him, threatening to reveal the whole gay clerical mob if Wuerl didn't pay him off. And for the record, he lied about the "service" of the priest at his funeral Mass. The priest was actively gay, and with Wuerl's loot in hand, headed down to Miami and Cuba, where he set up a gay hooker operation and was eventually strangled to death by a gay teen prostitute in Cuba.

Wuerl knew all that because it took moving mountains to get the priest's body back from the communist regime in Cuba, yet there he stood at his funeral acting as though the gay pimp priest was some paragon of priestly commitment. They don't come much more slick and sickening than Donald Wuerl, whose associations with Pittsburgh's gay community earned him the affectionate nickname "Donna the Girl" from them.

Wuerl is the same one who said the bishops should investigate themselves, which, of course, is exactly how it turned out. Wuerl, in fact, was implicated in the Rossi scandal, as various reports — multiple headlines — started emerging, saying Rossi was Wuerl's gay connection to the goings-on at the basilica — his point man. Rossi was specifically pinpointed by Abp. Viganò as "without a doubt a member of the gay mafia."

According to multiple reports, as well as pretty solid evidence, Rossi is an active homosexual who owns properties with at least one gay lover. One of his reported former lovers actually ended up convicted for homopredator sex abuse and served time behind bars. But Rossi apparently never went after minors. He was slick enough to keep his homosexual activities to hunting down college guys and other clergy.

The revelations about Rossi — active homosexuality coupled with hitting on college kids — actually resulted in Bp. Strickland of Tyler, Texas publicly asking why Rossi is still in active ministry. That's a good question. The Rossi "investigation" (some are calling it a whitewash) is still ongoing, almost half a year since it was begun. It must take a lot of time to figure out how to issue a phony exoneration.

The charges are in the papal nuncio's office in D.C. That's how Viganò knew about them, because he's the one who first received them.

Joseph Bambera, Rossi's Scranton bishop, is a known homosexualist, sympathetic to all things James Martin. Having him in the diocese to speak so often, he should give him his own bed in the chancery. Why hasn't he recalled Rossi to sideline him and cool his jets back in Scranton? For that matter, why hasn't new D.C. archbishop Wilton Gregory sent Rossi packing, at least until the investigation is over?

Why is Rossi, a virtually guaranteed active homosexual cleric, being treated so much differently by not one, but actually two bishops than, say, Fr. Eduard Perrone in Detroit, whom Abp. Allen Vigneron has helped spread lies about and removed from his parish with great fanfare? Perrone is innocent. Every day that goes by, the scheming and plotting of Vigneron becomes more and more exposed.

But Rossi, also under investigation — where the charges at least have an actual plausibility about them — is left in place as though they are just some clerical error. Well, let's see, Fr. Perrone is not a practicing homosexual, and Rossi, by all accounts, is. Do you still think homosexuality among priests and prelates has nothing to do with how the Church is run today by the hierarchy?

The gay mafia gets a pass, as long as it wasn't a minor, but the innocent, heterosexual, traditional priests get skewered. That's a horrible double standard — disgusting. It's disgusting but typical.

Well, at least when Bp. Barron's list comes out of those online Catholics you can trust, you can bet Rossi and Wuerl will back it, as well as most of the hierarchy. Like we said, it's disgusting. 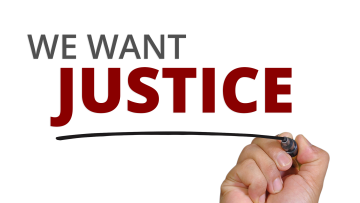 We Want Justice
But it is denied time and time again.