A Lump of Coal

Sitting in the archbishop's stocking.

Americans have an expression about getting something bad as a Christmas present. It's called "getting a lump of coal in your stocking." Here in the archdiocese of Detroit, Abp. Allen Vigneron and his hit man Msgr. Michael Bugarin have just gotten a king-sized lump of coal in their stocking.

It has now come out that when they turned over the file to attorneys for wrongly accused Fr. Eduard Perrone, they deliberately left out key pieces of information.

After stonewalling for weeks, dragging their weak case through the courts and further appeals, losing every step of the way, it finally took the potential threat of Vigneron being arrested for contempt of court on Thanksgiving Day for him to cough up the file.

But in a glaring display of dishonesty and lack of ethics, Vigneron held back some vital information - information which actually exonerates Fr. Perrone AND demonstrates just how duplicitous and crooked Vigneron and Bugarin have been with this whole case.

As Perrone's lawyers pored over the more than 500 pages, they noticed incomplete transcripts of witness interviews, missing pages, certain texts being referred to, but no actual copy of the texts themselves.

So Perrone's lawyers have had to go back to court and once again ask the judge to hold Vigneron and the archdiocese in contempt. They note in their motion, "The transcripts did not appear to start at the beginning of the interview and referenced text and email messages that the AOD did not include."

And most telling of all, and confirming what Church Militant has been reporting from the very beginning, Fr. Perrone has been set up by Msgr. Bugarin and the archbishop — falsely accused.

That's because within the file — the file that Vigneron and Bugarin are trying desperately to keep hidden — are statements from the alleged victim that "altered his description" of what he claims happened — and again actually "refuted a material statement attributed to him."

What's becoming more and more clear is that Bugarin, with the approval of Vigneron, put these suggestions into the head of the alleged victim, who at first agreed and reported them to authorities, but then on further questioning actually reversed himself.

And when Bugarin presented his case to the archdiocesan review board, he either lied to them and deceived them by deliberately withholding vital information — like Vigneron is doing now — or the board members were in on it and went along with the lynching of Fr. Perrone.

Either way, this is all continuing to happen with the blessing of the archbishop, who is beginning to set a record in the number of times he's being accused of contempt of court. The men who run the archdiocese of Detroit are liars and deceivers, stretching all the way back to the days of homosexualist Cdl. John Dearden, who ordained Vigneron in 1975.

Vigneron and his cronies in the chancery are engaged in a deliberate act of deceiving and disobeying the court in an attempt to prevent the truth of their actions coming out.

After being ordered multiple times to hand over everything, and refusing to for weeks, they finally produced partial records, hiding important records which reveal who they really are, as well as the whole truth of this filthy case.

So sitting in Vigneron's stocking right now is a tremendous lump of coal that he's going to have to deal with as soon as the Christmas season is over and his cheating and deceptions finally get exposed in the broad light of day. 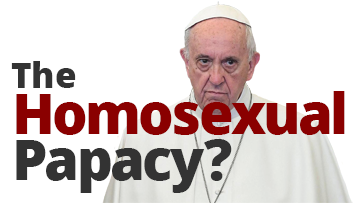 The Homosexual Papacy?
There is no authentic love for you, not one shred.