A Massive Insult to the Faithful

Could a bigger insult be leveled against the faithful?

I'm Michael Voris reporting to you from Rome where we have received information that the U.S. bishops have hired extra security for their upcoming meeting in Baltimore in a couple of weeks out of fear of thousands of faithful Catholics who will be holding a rally close to their meeting site.

Stop for just a minute and consider what that looks and sounds like.

Bishops — shepherds — many of whom are wolves in shepherd's clothing, who have made careers out of betraying the Faith, debasing the liturgy, covering for homosexual predators, being active homosexuals or homosexualists themselves, arranged for lives of personal luxury or retirement in luxury, set up pipelines from South America for gay seminarians, protected the likes of McCarrick and lying profusely about their knowledge of it, paid out billions of dollars in secret settlements, are now having to pay millions more to hundreds if not thousands of lawyers in what will be protracted legal cases involving 15 state and at least two federal law enforcement investigations — and we could go on and on — these men have decided that they need protection from faithful Catholics armed with Rosaries who want accountability for these decades of evil actions, lies, cover-ups and theft and sexual assaults by the thousands of children and young adults.

Could a bigger insult be leveled against the faithful? How few of these men have any love or regard for their sheep. They routinely insult them, verbally abuse them for wanting orthodoxy restored, run their good priests out of town or assign them for psychiatric care because they believe and teach the Catholic faith.

They have allowed schools in their charge — which cost a fortune — to fall into an abysmal state of failing to hand on the Faith, thus stealing the hard earned money of enormous numbers of Catholic parents.

The list of spiritual crimes of these negligent and hireling shepherds is so egregious that it staggers the imagination to consider what awaits them at their particular judgments, something we can't even say so of them actually believe. It is terribly apparent that many of these men have lost their supernatural faith, if they ever had it. They treat the Real Presence of Our Blessed Lord with massive and shocking disrespect.

As one example, look at this picture forwarded to us just a couple days ago from a shocked Catholic who happened to be visiting at another diocese and stopped into a parish — a banner associating the Son of God with the basest of mortal sins hanging over His Real Presence in the Church.

How is this allowed to happen? Because the priests and the bishops — loads of them do not believe. They have and continue to pervert the teachings of the Church, to distort them, lie about them to advance their own evil agendas. Judas had nothing on this lot.

And yet they continue on and on, marching down the road to their perdition and insisting that the sheep follow them. How dare Wilton Gregory and Blase Cupich and others roll out the red carpet for that lying priest James Martin with his homoheresy.

Gregory — a protégé of homosexualist Cdl. Joseph Bernardin while in Chicago — was one of the bishops, of whom there are quite a few, who got caught trying to build a palatial retirement house for himself by investigative reporters.

When busted, he apologized and said he didn't realize — yeah, whatever — same with retired Newark Bp. John Myers, McCarrick's successor, who spent millions on his retirement pad.

And San Jose Bp. Patrick McGrath, who also got busted by local media and had to ditch plans for his sweet posh multimillion-dollar retirement pad. And the disgraced Donald Wuerl has been building sweet retirement digs for himself as well for quite some time now, which is fitting when you consider he would be moving from his current palatial pad on Embassy Row to a palatial retirement pad.

Of course, he lived in a multimillion-dollar pad in Pittsburgh when he was bishop there covering up predator priests so it's only fitting he retire in luxury on your dime.

The entire homosexualist traitor contingent always seems to live in great luxury and surround themselves with fine things.

Now, is this the case with every bishop in the USCCB? Certainly not. But where are the voices among them, in their own conference, publicly condemning this aberrant behavior, this betrayal of the Faith, this debasing of the liturgy, this bowing down to the demons of sodomy and perversion, the lives of extravagance led by some of the worst among them?

The organization, as an organization, is corrupt from top to bottom, as should be evident by the fact that 16 years after their first public shaming in the secular press, here they are again, having learned nothing, again trying to develop a plan to deal with the effects of rampant homosexuality within their own ranks and openness to it.

Cupich of Chicago, who appears to be the anointed mouthpiece of the sodomite prelates here in Rome for the Church back in the United States, has the gall to repeatedly and publicly lie about the cause of all this.

It said flat out that more than 80 percent of the victims of these twisted perverts that you all ordain and allow in the seminaries — 80 percent of their victims were teenage boys. Where is the call out to Cupich from his fellow bishops?

Even homosexualist Wilton Gregory publicly admitted back then that it was homosexuals in the clergy responsible for nearly all of this, a rare concession of the truth.

Then he got put back in his place and gently backpedaled from everyone knew was correct, and homosexual predator in chief himself, Theodore McCarrick, was out in charge of the official response and declared from high that it was not homosexuality among the clergy to blame, but psychological immaturity.

And the bishops were all enthused to stand and give him their full-throated support. They all left Dallas that year pretending the evil in their own ranks had come to an end.

The rape of children did slow down after secular media coverage forced the issue and billions of dollars in payout shook this crooked lot their core. But it did not stop the sexual assault of young men in seminaries, the perversion of doctrine and resulting spiritual abuse of the faithful by these perverts.

Case after case continued — and continue to this day — to emerge of active homosexual bishops, priests living with their adult lovers, homosexual pornography, the cover-up of all of it, not to mention the associated financial scandals by these gay clergy stealing from parishes and financing their evil in lavish fashion and vacations and second homes in gay enclaves around the country.

And in the face of all this, the U.S. bishops think they are so threatened by faithful Catholics that they need to dole out who knows how much to beef up security because we are all going to rush the meeting and start physically assaulting them?

Your Eminences and Excellencies, it was not we laity who physically assaulted altar boys, raped seminarians and stole money from other faithful to finance our wickedness.

Nor did we actively participate in covering it all and then, once caught, offer crocodile tears and meaningless apologies and toss faithful Catholics out of "listening sessions" and then lie about it until video evidence proved it.

Here's an idea for all of you. Thousands of faithful Catholics, from almost every state in the country and more than 170 dioceses, are coming on their own dime and time to Baltimore in about two weeks time to pray for you — that whatever demon has seized control of your group be driven out.

Instead of hiring extra security with our money to "protect" yourselves from us, why don't some of you come over and say thank you for the prayers?

Why don't some of you come over and sit with us for an hour and take serious questions from serious Catholics who you can throw out or hire police and security guards to keep out?

We know it might be strange for you being in a group of people who actually believe the Catholic faith as the Church has always taught it and not clamoring for sodomy to be accepted under the guise of mercy and compassion, but hey, live a little, give it a try.

We'll be right outside your windows. Just look out, and we'll be easily recognizable. We'll be the ones with the Rosaries praying for you. And if you think we are kidding about at last some of you coming over and offering a prayer with us at least, we are as serious as a heart attack.

In fact, since you use our money to hire security to keep us away from you, it's the least you could do.

Will even one of these men come to an assembled crowd of thousands of faithful Catholics and offer one word, one syllable, of comfort?

We'll see. How about meeting us where we are at? And having an encounter with us? 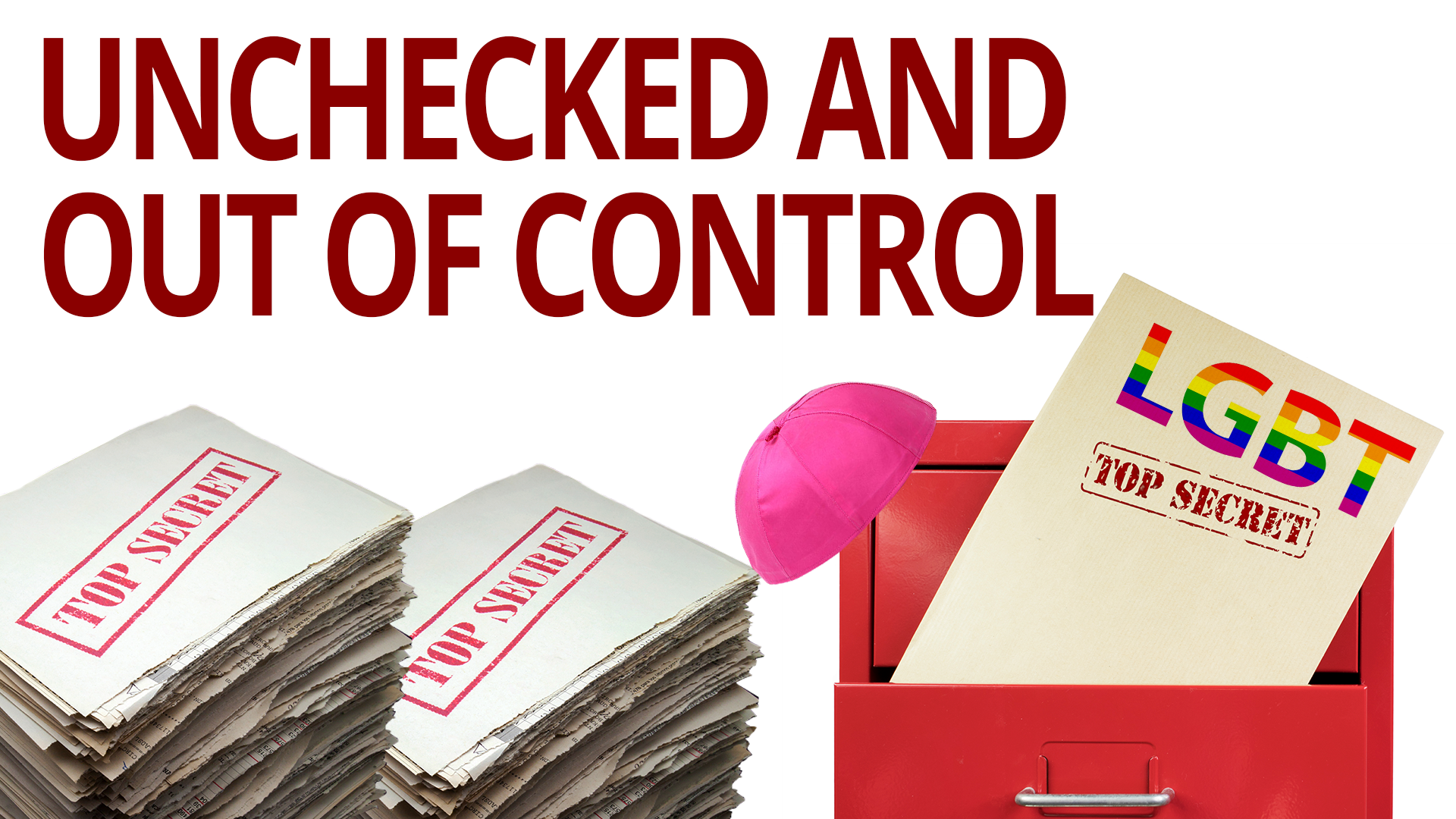 Unchecked and Out of Control
End the careerism, the politics, the clericalism.