Except for concealers of the truth.

I'm Michael Voris coming to you from Rome, where the sex summit is under full swing in what many are calling nothing less than a complete whitewash.

Recall the reason this is all going on: this simple press announcement from the archdiocese of New York released on June 20 of last year. This was the pebble that started the boulder rolling down the hill which has come crashing into Vatican City this week.

The announcement by New York that Theodore McCarrick had been credibly accused of sexual assault of a teenage boy in the sacristy of St. Patrick's Cathedral decades earlier — from that one piece of information, the dam broke, not only pom McCarrick's evils, but on the entire network by which he was able to reach such heights in the Church.

And while McCarrick himself has now been ruled on and dismissed from the clerical state, there are a zillion other questions that the faithful are demanding be answered.

And that brings us to this summit — a meeting which doesn't really appear to have any substantive point. Among the multiplicity of questions and layers of complexities that need addressing, not one of them is being talked about at this meeting.

In fact, what this all amounts to seems to be nothing other than one gigantic cover-up of a massive cover-up. McCarrick, given his influence over the decades, appears to be the main key to understanding this network.

He is the hub to which nearly every spoke had been directed for essentially the last 40 years of the Church's life in the West. So it is beyond curious that absolutely no further investigation of McCarrick has happened or scheduled to happen.

It appears authorities here in Rome are perfectly content to let the McCarrick affair itself just fall into history, and then just move on. But McCarrick was the kingpin — as well as kingmaker — in the Church for the past four decades.

A lot of questions need to be asked and answered about his connections, his movements, his proteges and accomplices. Cardinals Cupich and Tobin owe their spots in the College of Cardinals to McCarrick's influence.

So the question needs to be asked, why? What is it about these men that McCarrick wanted promoted and advanced in the upper echelons of the hierarchy.

Cardinal Farrell, likewise — who now has been granted enormous influence in being named by Pope Francis as Camerlengo — he owes his career to McCarrick, with whom he, uncoincidentally, shared a house in Washington, D.C. for six years.

Donald Wuerl as well was a protege of McCarrick and assumed the leadership of Washington, D.C. when McCarrick stepped down and would not have been able to without the seal of approval of McCarrick.

All these men are hiding information they know despite their assertions that they were all shocked and surprised by the news of McCarrick last June.

Every single action of these men — their public statements, their appointments, their travels, their associations — all of it must be heavily scrutinized precisely because they all come from the McCarrick episcopal tree.

They are each part of the cover-up, even as Abp. Viganò has repeatedly testified to. The question is: What exactly do they each know?

At last November's U.S. bishops' meeting, a proposal was scheduled to be made that a lay-led investigation be empaneled for this very reason, to get to the bottom of how McCarrick carried on for so long, completely unchecked. Going into the meeting, the idea seemed to enjoy some level of support from a sizable number of U.S. bishops. And that's when the cover-up went into overdrive.

Authorities here in Rome ordered that discussion be canceled immediately and no vote taken. Within moments of that announcement at the very beginning of the meeting, Cupich grabbed the microphone and pointed to this meeting in Rome as the place where it would all be sorted out.

That was a lie. From the very outset of this sex summit, there has never been the intent to "sort it all out." Something very large and public had to be done, to be sure, but only to give the appearance of something being done.

And all opposition had to be crushed. Curious, for example, that Boston Cdl. Sean O'Malley has been forbidden from speaking at this meeting or making any presentation.

O'Malley would be a natural, owing to his position in the U.S. bishops' conference of heading up child abuse investigations. But he has been completely sidelined. In fact, he appears to have fallen totally out of favor here in Rome, and given the fact that this summer he reaches the mandatory retirement age of 75, it appears his star has burned out.

All the faithful can hope for is a "Viganò moment" from him as well. This summit is ridiculous on the face of it, having been transformed from what appeared to be an "investigation," which was never the real case, to a pastoral counseling session offering bishops advice on how to deal with sexual predator priests.

Faithful Catholics everywhere are totally fed up with the lies and scheming of all of this.

Whether truthful answers will ever come from the likes of Cupich, Tobin, Farrell, Wuerl or even McCarrick seems little else than a pipe dream.

But the effects on the Church at large from the McCarrick evil will continue long past his death — which means the faithful laity cannot rest until all of this is rooted out.

Pray and work — each very hard. The full truth has yet to come out. 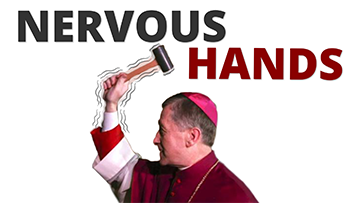 Nervous Hands
But they tell a story.