Tuesday night's State of the Union address will go down in history as a political exorcism of the Left.

As President Donald J. Trump strode up to the lectern and confronted the diabolical, the demons began to become agitated. They were in the presence of the high priest, with all his many flaws, and they knew it. In what the president had earlier in the day said would be a low-key affair, he stood in the well of the House and exorcised the demons of the Left, and they knew it.

In the Catholic rite of exorcism, as the priest begins, the possessing demons begin writhing and spitting and yelling and making all kinds of guttural sounds. That's what began happening with them as Trump continued drawing the sharp distinction between his administration and that of Barack Obama's — a president who opened the door to the demons into the political body so they could set up what was viewed as a permanent camp.

But the more and more Trump spoke words of truth, the more the demons were put to confusion as is the case in exorcisms: They were uncertain if they should applaud the surviving family of a killed U.S. serviceman. They could not decipher if they should cheer or applaud a little fourth-grade girl getting a scholarship.

Diabolical pouting, glowering, boos, hisses — they did all you would expect once political holy water was sprinkled across the democratic socialists. They writhed and screamed in anguish at being ordered to leave.

The high priestess of the Left ripped up the speech in a demonstration of hate so deep, even her allies in the liberal media were stunned.

And make no mistake — they are legion.

The host body they have taken possession of is American culture. While certainly not perfect by any stretch, just as no victim of possession is, nevertheless it does afford the opportunity to do the good and moral and the right.

But these demons deny there is truth, or good or right, and when Trump was done, the only response was rage — which we saw when the high priestess of the Left ripped up the speech in a demonstration of hate so deep, even her allies in the liberal media were stunned.

The Speaker's rage was reminiscent of another time when Holy water was sprinkled over a possessed woman in a rage.

And make no mistake — if these demons ever get sufficient control, they will vent their rage against all who challenge them.

Why should Catholics care about this so much? Because there has been a decided embracing of the demons of the Left under this pontificate, which has been ongoing for decades, although under the radar.

Last year, Church Militant aired a Vortex where we spoke of this growing union between the political forces of the demonic and the various members of the hierarchy. Given all that has happened in the relatively short time since we aired that, we'd like to re-present it to you for your deeper consideration and reflection. 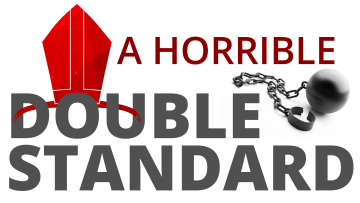 A Horrible Double Standard
It's disgusting.