Today is June 15, 2022, and that's a pretty significant day here at Church Militant. First, it's the day we officially became ChurchMilitant.com, the online presence of St. Michael's Media, which is the actual name of the apostolate.

Church Militant long-timers will recall that for the first few years, we were known as RealCatholic.tv. But that was before Allen Vigneron, the deceitful archbishop of Detroit, and his malicious chancery staff got involved and painted a false picture to the public of us not being allowed to use the name "Catholic" in our title. They produced a statement that was massively deceptive in its wording.

It's true that the website was called RealCatholic.tv back in the day, but it was not ours. A supporter who lived out of state — and not under the jurisdiction of Vigneron — registered the site and asked us to put our videos on it.

Vigneron knew this because we informed him when he started making noise about us. He knew because his chancery henchmen actually wrote to the supporter and told him to stop using the word "Catholic" in the title. The supporter replied that he wasn't under Vigneron's jurisdiction, so Vigneron should mind his own business.

Undeterred by facts, on Thursday, Dec. 15, 2011 — the day before the chancery went home for Christmas break — Vigneron issued a statement craftily worded to make it seem as though we were somehow disobedient and in violation of the Code of Canon Law.

At first, even we were thunderstruck by what we were discovering. But it was true, every last bit of it.

Vigneron knew his statement was untrue in substance but issued it anyway. Take a look at how these guys operate by twisting the truth. The relevant part reads, "The archdiocese has informed Mr. Voris and Real Catholic TV, RealCatholicTV.com, that it does not regard them as being authorized to use the word 'Catholic.'"

So, to the uncritical eye, that sounds like we are the bad guys. But notice the clever, deceitful wording; it doesn't say we cannot use the word "Catholic," only that they have informed us that it doesn't regard us as being able to use it. And remember, this is after they knew we didn't control the name of the website. We didn't register it. We didn't pay for it. It was not ours when all this was going on.

To avoid further headaches dealing with Vigneron over this matter, we changed the name to its current name, ChurchMilitant.com, a name that everyone agrees is much better. Today is the 10th anniversary of the introduction of that new name. So, on that score, thanks, Archbishop.

Another reason to mark today is that on this same day 10 years ago when we rolled out our new name, we also opened the doors on our new building, which we are still in today and which houses our studio facilities. If Vigneron's plan was to rain on our parade, it backfired.

His unwillingness to ever meet with us in a cordial manner — even to this day — woke us up to the rot that existed in this archdiocese, stretching back decades, of which he is now the heir.

Vigneron is part of the homosexual cabal that has destroyed the Church in America, and it was through him and his hatred of us that we became intensely aware of all this and stepped up our efforts to dig down and get to the bottom of all this.

So it has been from this building that we started exposing the homoheresy in the Church. At first, even we were thunderstruck by what we were discovering. But it was true, every last bit of it.

And long before the McCarrick news and the likes of James Martin burst onto the scene, Church Militant was rolling out story after investigation after revelation that the Church was being destroyed from within by the homomafia, of which Vigneron's archdiocese had been the epicenter, stretching back decades.

Ironically, it was Vigneron's hatred and fear of Church Militant that has propelled us into the outfit we have become today. So, again, Archbishop, many thanks. We are a creation of yours and the rest of the crooked, lying, cheating, homosexual hierarchy you all desperately sought to cover up.

This October, Vigneron will be entering his last year of corrupt leadership here in Detroit, turning 75 next October. When he is at last gone, he will have shrunk the archdiocese down to what amounts to roughly 50 parishes, down from hundreds when he took over. It is an absolute disgrace.

The only thing thriving in this ecclesiastical wasteland will be Church Militant — and that's not to brag. It's to give hope and inspire. We have never dealt with anything here but the truth. Vigneron has done just the opposite. And while he held all the cards and worked behind the scenes for years to wipe out this apostolate, when he leaves, Church Militant will be the last one standing.

Never give up on the truth. Never abandon your principles. Even when every gun is trained on you, stand fast and remain loyal to Christ and His Church.

And on this last point, the most important aspect of June 15 for this apostolate is that 18 years ago today, my mother Anne was born into eternity. Without the slightest doubt, wonder or hesitation, I can state unequivocally that without her suffering and sacrifice, none of this would be here today. As most of you know, I led a horribly sinful life for many years prior to my mom getting cancer. During those years, she begged and pleaded with Our Lord for her sons — my brother and me — to return to the practice of the Faith.

Eventually, out of massive frustration that her prayers didn't seem to be working, she said to Our Lord, "I don't care what you do to me. Do whatever you want, but spare the eternal lives of my two sons."

It was just a couple of weeks after that prayer that she was diagnosed with a very rare form of stomach cancer, which she suffered with tremendously.

Her dying and death in 2004, which followed quickly after my brother's sudden death 10 months earlier, was the impetus for me to return to the Faith and eventually begin this apostolate, which has blossomed into what it has become today. Please keep my mother in your prayers.

This apostolate, therefore, should be a sign of hope and encouragement for any Catholics out there discouraged and despondent. Don't be. Raise yourselves up. Look to the future. Ultimately, Our Lord is in control of everything.

No matter what enemies do to move against you and no matter who comes after you, truth and faithfulness always win out.

Even when every gun is trained on you, stand fast and remain loyal to Christ and His Church.

True, you will have to fight like the dickens, and it may seem very dark at times. True, you may even have to face the most bitter betrayal from some you trusted very closely, but our work as faithful Catholics is simply to remain steadfast — and fiercely so.

But as my mom once told me, if you look at a needlepoint from underneath, it is a crazy pattern of seeming chaos. It seems to make no sense at all. But if you flip it over and look at it from above — like from Heaven's perspective — it all makes perfect sense and is really quite beautiful.

So rejoice with us in our work, which is a work of the Church to serve Catholics. 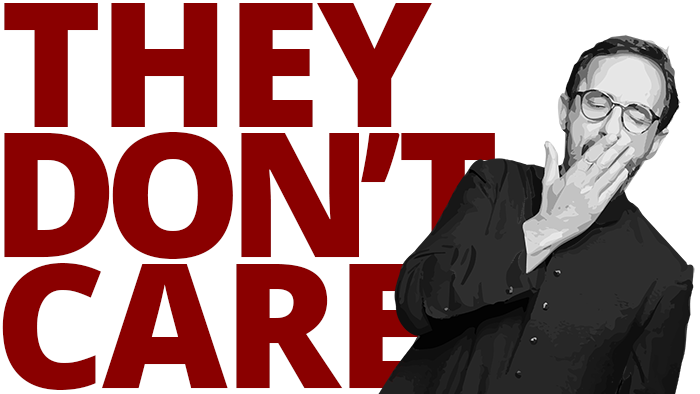 They Don’t Care
And they never have.