A Virus by Any Other Name

Still comes from the commies.

It's pay-up time for the commies in China — seriously.

You need to look at the association — the relationships — between all these various Marxist outfits, including the U.S. media and various departments at the Vatican, in addition to the killers in the Forbidden Palace.

This virus began in Wuhan, period. And after a mid-level commie bureaucrat tried to pin that on the U.S. Army, a higher-ranking Chinese Communist Party official finally denied the claim a couple days ago. It began in Wuhan, period. Sorry commies, but that's the reality. Calling it the Wuhan virus — like CNN and other Marxist media outfits did originally — is no more racist than calling enchiladas Mexican food.

This virus has killed thousands precisely because of where it came from — a communist regime which brutalizes its own people, routinely, as a matter of state policy.

But there is a disinformation game being played here. And it shouldn't be surprising to anyone that it all began in the Vatican — not specifically about the Wuhan virus, but the presentation to the world that the commie killers who run China and terrorize their own citizens, are perfectly normal. More on that in a moment.

First, there's this insanity that identifying the killer virus with China, but more specifically Wuhan, is racist. It's not racist in the slightest, any more than President Trump was being racist getting out ahead of the whole scene by closing the U.S. borders to Chinese travelers. Funny how when Trudeau in Canada, as well as Mexico and Spain and Italy and so on, all closed their borders, the idiots on CNN and MSNBC didn't call them racists. Virtually every major disease outbreak is named after either the person who first died of it, the scientists who discovered it or the geographic location where it first appeared.

But in the case of the Wuhan virus, Tedros Ghebreyesus, the director-general of the World Health Organization, announced on Tuesday, Feb. 11, that the name would be COVID-19. His reason? Naming it after a location would be "stigmatizing." Give me a break. No, it would be truthful and accurate. But of course, in this case, it is much more than PC, even PC on steroids. It's deflection. This virus has engulfed the world and killed thousands precisely because of where it came from — a communist regime which attacks and brutalizes its own people, routinely, as a matter of state policy.

There's a lot of debate whether the virus originated in a lab as part of a larger bioweapon strategy or in the so-called wet markets where raw, exotic animals are eaten, often still-living. In either case, this nightmare scenario was brought to you by the Chinese Communist Party — emphasis on communists — either engineering a killer virus to control populations, or creating an environment where people are so deprived that eating raw, sometimes live animals, is a necessity.

Then, the commie killers lied to the world about it and murdered people in an attempt to keep it quiet. But the enormity of their crimes cannot be called out without at the same time pointing out their enablers — political and religious.

In the political world, phony Catholic Joe Biden has been the leading enabler of making the communists in China seem respectable. Biden was perhaps the leading force behind getting and maintaining the "most favored nation" trade status for China during his time in the U.S. Senate. The commies used that status to suck millions of jobs out of America, luring greedy corporate chieftains to the never-ending supply of cheap labor in communist sweatshops. The United States' as well as other countries' corporations have to pay a hefty sum to the commies to gain access to those slave laborers. And there was Joe, every step of the way, leading the charge.

The Chinese communists grew rich. The nation became an economic world power and created trillions of dollars in trade imbalance between us and them — the so-called unlevel playing field that Trump has gone about leveling, no thanks to Joe and the Dems. But Joe couldn't care less. No wonder the commies in Beijing were happy to fork over a billion bucks to his son Hunter when Biden was faking his way through the U.S. vice presidency under sellout Obama. What's a billion dollars here or there when you've unfairly ripped off trillions over the years?

But for Catholics, perhaps the greatest betrayal has been the Vatican elevating China to some vaunted position on the world stage of respectability — being depicted as the most caring nation. And no, that's not a joke. Two years ago, the Chancellor of the Pontifical Academy of Social Sciences praised the commie government in China — actually praised them — for demonstrating moral leadership on a global level in defense of human dignity. Precisely, he stated: "At this moment, those who best realize the social doctrine of the Church are the Chinese."

Well, if the social doctrine of the Church calls for aborting female babies, aborting the second conceived child regardless of sex, having a concentration camp system that is the envy of dictators all over the world, running sweatshops for global corporate fatcats to get rich, brutalizing the populace and pouring vasts sums of money into biolgocal weapons to kill innocent civilians, then, yes — score!

The unbelievable comments came from Bp. Marcelo Sánchez Sorondo, an Argentinian, who went on to say, the communist Chinese have "defended the dignity of the human person." Has pot been legalized in the Vatican? He added that "China is evolving very well" and that China is not the same as it once was. They care about climate change. Well, thank goodness for things evolving, right?

Sorondo last month gave Holy Communion in the Vatican to Argentina's President Alberto Fernández, a rabid abortion supporter. And if that wasn't enough, Fernández — again, the nation's president — is shacked up with a concubine, and of course the first — ahem, "lady" received as well, at the hands of Sorondo.

So if someone ever tells you the Church isn't with the times, you laugh at them and say, "Not only are we with the times, we are actually leading the charge." We praise communist torturers who unleash pandemics on humanity, distribute the body and blood of Jesus Christ to child-killing presidents and their whores, and wouldn't think of lifting a finger to prevent the leading Democrat in the race for the White House from preventing sacrilege.

What could possibly go wrong?

Yes, the communists in China are bad — real bad — but hats off to those who vaulted them into their world leadership role — the Marxists in America joined by the Marxists in the Vatican. And did we mention pervert Ted McCarrick? Remember him? He crafted the deal for the Vatican and China which has led to the selling-out of Chinese Catholics.

But of course, in the face of all that, let's keep our priorities. No matter what you do, never, ever call it "the Wuhan virus." That would be "stigmatizing." 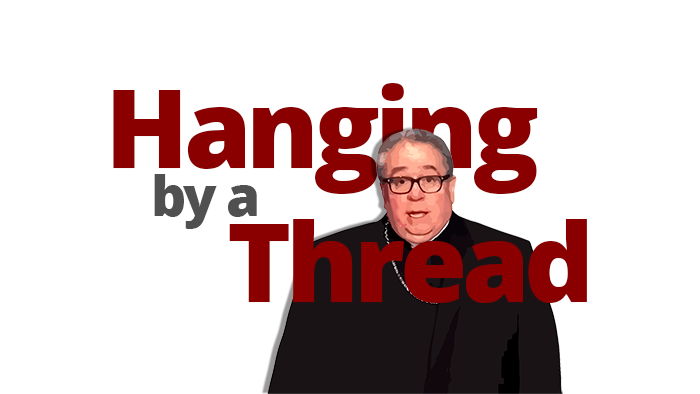 Hanging by a Thread
Time to cut the tie.