And it ends in Hell.

A plot has been going on in the Church now for a couple of decades where homosexuality is attempting to be being normalized. As with any plot, there is the plan and the plotters.

First, the plotters — the point man is Fr. James Martin, the pro-gay Jesuit priest and the high-ranking and influential prelates who publicly support him: Chicago's Cdl. Blase Cupich; Newark's Cdl. Joseph Tobin; Cdl. Kevin Farrell, prefect of the Dicastery for Laity, Family and Life in Rome; and numerous gay-cheerleading bishops around the country. These are the plotters who are trying to make homosexuality seem normal and good.

Now, for the plot — in 1988, there was a meeting in New York of various gay groups from all over America who discussed how the country could be brought to an acceptance of homosexuality. That meeting produced a book called After the Ball: How America Will Conquer Its Fear and Hatred of Gays in the 90's by authors Marshall Kirk and Hunter Madsen. In their book, they laid out a four-point strategy to accomplish their ends. Without going into the details, their plan worked brilliantly, and now America is a gay-friendly country in the space of about two generations.

Well, this same type of thing has occurred in the Church, as well, although in a little more sneaky fashion. The case for acceptance of sodomy has never been overtly made by clerics and prelates, but the case to accept those who practice sodomy is made constantly by the plotters named above. They disguise it as a call for compassion and understanding and acceptance of the people — which is extraordinarily disingenuous — because no one is being mean to the people but to the practice of sodomy. That's what's being disagreed with, but the plotters cannot let the conversation go there. So, they try to keep the focus on the people instead of the sin. But the most clever part of the plot is only now beginning to unfold.

Through all the various gay Catholic, so-called ministries around the nation which The Vortex has reported on frequently, a subtext has been formulated. Playing off the cultural maxim that gays are "born that way," these plotters have quietly sneaked in the subtext that not only are you just born that way but that God actually created you that way. This has the effect of spiritualizing sodomy and, therefore, normalizing it. In fact, more than normalizing, actually baptizing it, making it a creation of God that needs to be embraced, celebrated and enjoyed. After all, God doesn't make mistakes, right?This is all part of the plot by devious Churchmen — like James Martin and his clique of cardinals — to impose on the faithful the warped and sick notion that God blesses and revels in sodomy as an authentic expression of love.

For decades, this plot has been unfolding in a number of ways: Catholic university courses; pro-gay conferences; numerous books written by supposed scholars on the subject; a steady stream of millions of sermons saying we can never judge; an over-emphasis on the primacy of conscience irrespective of its proper formation; horrible catechesis; gay-outreach ministries all over the Church in America and so forth. The combined effect of all these efforts over all these years has been to soften the intellects of Catholics by appealing to their emotions and discount the Church's teachings, and it has worked masterfully.

Every poll indicates that a majority of Catholics not only accept homosexuality and same-sex marriage, but they accept them more than any other religion in America. And now the gay club in the Church is seeking to put the final brick in place by proposing that God, Himself, ordains sodomy, that He chose to make a child in the womb be conceived as gay — after all, if a child is born that way, then he necessarily must have been conceived that way, right? The word diabolical isn't sufficient to capture the evil that these men are conducting and engaging in. Gay priests, active in their homosexuality — and their bishops and religious superiors blinded by their own lack of supernatural faith — have taken the Church on a short course to ruin.

Faithful Catholics must understand what's going on and then resist this wicked plot forcefully. Souls are being damned because of these men, and it is our duty to try and save as many as we can. 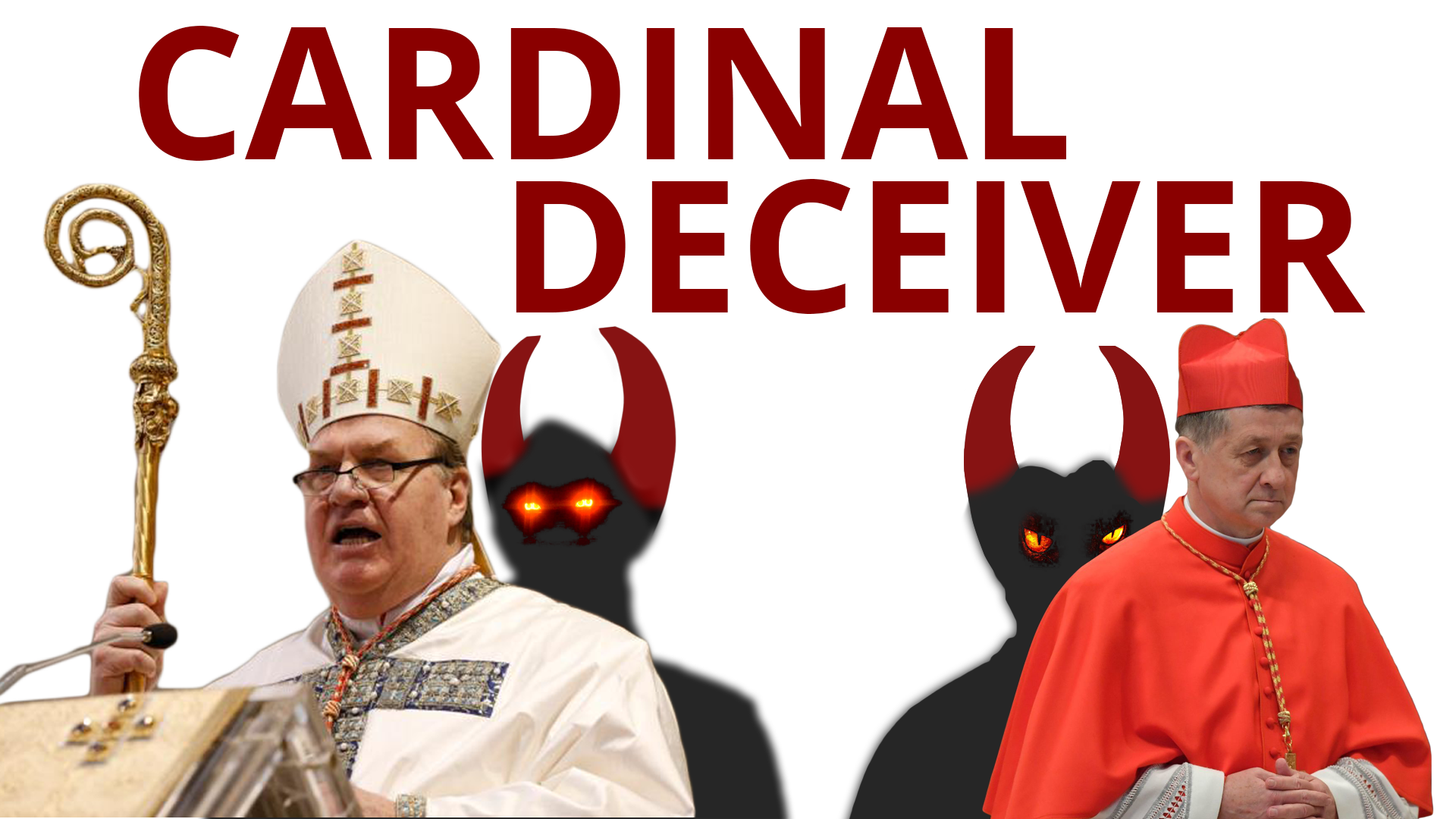 Cardinal Deceiver
Do they not realize that in the end they lose and are damned in the process?