Alinsky and the US Bishops

Decades of lying and stealing from faithful Catholics.

This weekend most parishes in U.S. dioceses will be taking up a collection for the Catholic Campaign for Human Development (CCHD).

Here's the point: Give nothing to that collection.

It's a fraudulent collection portrayed as helping the poor, when in reality huge sums of the donations are handed out to pro-abortion, pro-gay groups, not to mention radical, social justice-warrior groups who are also involved in getting out the vote for the Party of Death.

CCHD is a sham. Sure, it may do a good thing here or there, but the thrust of this decades-old endeavor has been to support Saul Alinsky-style community organizing.

Ten years ago Church Militant produced an in-depth investigation on the connection between Saul Alinsky and the U.S. bishops, which began in Chicago.

Alinsky was an atheist Jewish marxist who cozied up to some in the chancery and got them to drink his Kool-Aid. Alinsky founded an outfit called the Industrial Areas Foundation, which was essentially a Democratic Party voter-registration initiative posing as a poverty-fighting agency.

Priests he encountered through that work, especially a Msgr. Jack Egan of Chicago, went on to establish what was first called the Campaign for Human Development — missing the word "Catholic." The entire initiative was put in place by Chicago's eventual cardinal, the homopredator satanist Joseph Bernardin.

The annual collection, which usually generates millions, was first overseen by Bernardin back in 1969 and 1970 just as he was gaining a stranglehold on the U.S. hierarchy and installing dozens of homosexual men as bishops and using the cover of social justice to justify it.

In fact, Bernardin's CCHD produced the most famous community organizer of all time — Barack Obama — who learned the Saul Alinksy tactics of division and class warfare on the Church's dime, as Bernardin paid for Obama to go to Southern California back in the day to hone his craft.

Obama came back to Chicago and began plying his trade until it got him all the way to the White House, with the destruction of the United States at the top of his agenda. And if you don't believe it, then listen to Obama himself praise the homopredator cardinal and recognize the contribution Bernardin made to his formation. His comments were made from the graduation stage at Notre Dame in 2009.

Notre Dame itself, bastion of heresy now, played an important role during the very early years of the CCHD. That Chicago priest, Jack Egan, was driven out of Chicago by his cardinal, who saw right through Saul Alinksy's cover story and recognized the threat to the Church. Egan was then given 13 years of protection at Notre Dame by the notorious Fr. Theodore Hesburgh, who was busy in his own sphere dismantling Catholic higher education.

When you step back and understand the confluence of all these various factors — the alliances between evil, wicked men stretching back decades — the current disaster come straight into focus.

Much of the funding for the dismantling of the culture, and the treason in the Church, was funded by this collection. It still is.

If you'd like to watch the full report, please just click on the link. It's as timely now as it was then.

In the meantime, how dare the U.S. bishops — who have been met with privately and sent dozens of reports about this evil and refused to act on them — how dare they still lie to faithful Catholics and collect this money?

Last year the CCHD gave a gay group three-quarters of a million dollars for their activity.

But over the years, tens of millions of your money, gotten from you under false pretenses, has been handed out to all kinds of radical, anti-Catholic, anti-American groups.

If bishops want to fund these horrific groups, then let them dip into their own savings and sell off their luxury mansions, or get some of the enormous sums homopredator Bp. Michael Bransfield stole, or the millions that homopredator Theodore McCarrick had squirreled away.

The laity is done with being lied to and played for fools. 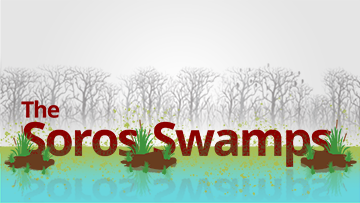 The Soros Swamps
In Rome and DC.