A personal reflection, if I may, on the very sad and disappointing outcome of the midterms: We got out of the studio here around 2:30 in the morning after a nearly nine-hour marathon. As I was driving home in the dark of the wee hours in the morning, my thoughts raced. I went to bed very sad, and woke up sad but accepting of a new reality.

It's not that the world suddenly changed in the wake of the midterms. It's that the midterms simply revealed kind of a final presentation of what had been brewing for quite a while. And what that is, is simple: There has been a foundational shift in civilization.

Looking at this, as I said, from a very personal point of view, stay with me here. I'm 61. The institutions that were the embodiment of cultural life no longer exist. In my life, those would be America, the military, Notre Dame and the Church.

This is simply no longer the same country — in any way, shape or form — as it was when I was young. During the nation's bicentennial (July 4, 1976), I got up at 5 in the morning and watched the wall-to-wall coverage on CBS of the nation's 200th birthday.

I still play Lee Greenwood's God Bless America in my Jeep and belt it out when I'm alone. And yes, I get goosebumps. Now, the country that my heart used to beat so proudly for supports child murder en masse, not by judicial fiat, but now by the will of the voters — and expect that to sweep the nation in the next election cycle or two. It glorifies and celebrates sodomy. It increasingly supports the putrefaction of the minds of children.

The U.S. military: I grew up on U.S. Air Force bases in England, Texas and California. I used to ride my bicycle along the flight lines, racing the fighter jets thundering down the runway. I loved the U.S. military. I remember being in middle school when the troops came back from Vietnam and were vilified, thanks to the press. I seethed inside.

Now, the woke mob is converting our military into a brain-washed collection of out-of-shape liberal kids with guns.

There has been a foundational shift in civilization.

I went to Notre Dame, graduating in 1983. I had wanted to go there since I was 7. I worked my tail off in school to get there. Once there, I got elected as freshmen hall president in the first week. I was so excited about being there, I was given the nickname "Rah-Rah." It stuck. I even tried out for leprechaun but was disqualified for being too tall.

Now, the place is a theological wasteland — not just "protecting" LGBT students, but actively promoting perversions of all kinds. And then there is the Church, not as She in Herself, but the laughable group of so-called leaders who are nothing but weak, socially polite, effeminate men (some of whom are truly evil, the rest of whom are absurd in their cowardice).

She is still eternal, always will be, because She is the embodiment of the Eternal Logos. But the human aspect has reached all-time lows, and considering the temporal history is 2,000 years, that's saying a lot. But regardless of it being a lot, it's true.

So for our generation raised on church, country, military and being true to your school, the depth of this inversion is soul-shattering. Looking around from an earthly perspective, there's nothing left — and that is a frightful gun barrel to stare down. It's all gone.

And that's not just some sad emotional overresponse. The hard truth is it's really been gone for a while. We just haven't realized it probably because we didn't want to admit it. I had that same feeling when my parents and I were having the follow-up visit with my mom's cancer doctor a few months after her surgery.

In the face of my mom's inability to improve, I asked when things would get better. He very matter-of-factly said the cancer had advanced to stage 4. There was nothing more to be done. "You have a few months left, Mrs. Voris." It was like being immediately transported into a fog of unreality.

No, America is not dead, but stage 4 has arrived, and there is nothing more to be done. The last tactic of politics has proved unable to cure the sickness. It's just too far gone.

So now, as the fog begins to lift, we have to ask ourselves, what of the few remaining youths who have not immersed themselves in a world of pornography in their parents' basement, counting their participation trophies and making abortion the center of their universe?

There are still some young people who reject all that. I know some of them. They work here at Church Militant. They are young and dating or engaged or newly married or even expecting. They are quickly shaping up to be the antitheses of their peers.

America is not dead, but stage 4 has arrived.

Are they not worth the fight — a fight that is developing into one of preservation more than advancement? Those of you in my generation know some of these young folks, and they are worth the fight.

They'll never know the thrill and goosebumps of blaring out the national anthem in a packed stadium, of growing up in a strong America or even a strong vibrant Church. They have been conditioned to be the minority, the weirdos, the heavily scorned. They now have to read about a strong Church and a strong country in dusty books, or listen to my generation tell them how good we once had it. It is sad; there's no doubt about it.

Just because it's all gone doesn't mean it can't one day return. It's just a safe bet it won't return in our lifetimes, or maybe even theirs. But if it is ever to return, it must be preserved and passed on. There must be a transfer of generational wealth, to use an economic term.

We all need something to live for in this life. And while our own salvation must always be the focus, that cannot exclude the instruction and protection of the young. 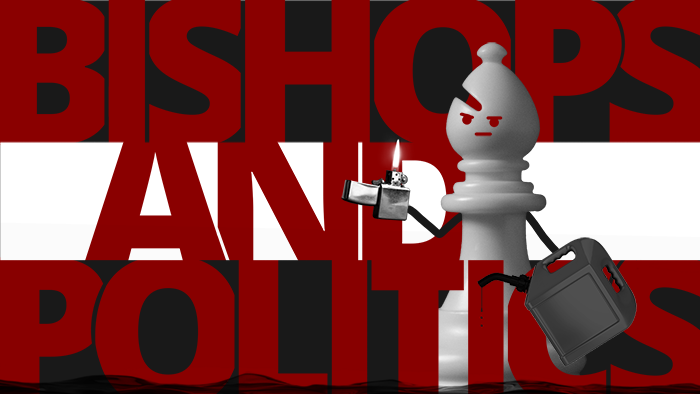 Bishops and Politics
The collapse of the nation.