All the Proof You Need

We have been telling you for years, even as recently as earlier this week, that the Catholic establishment media cannot be trusted because all they do is republish press releases and lies from various bishops' offices.

And wouldn't you know, practically no sooner had those words come out of our mouths a couple of days ago, but all the proof you need just plopped into our laps.

Church Militant had received information shortly afterward from a very reliable source that his destination was some facility in the diocese of St. Augustine, Florida, near Jacksonville.

After confirming what we could, we published what we knew after performing our due diligence and calling various places in the diocese where he might be being housed and — this is important — calling the diocese itself, which we did.

Our article set off a series of denials and accusations and charges that Church Militant was producing fake news.

Now, so we have the record straight, we did call the diocese of St. Augustine in Jacksonville and asked about our information. They called us back and said no one there had heard anything about it. But that's not the story we're talking about today, the McCarrick-specific story.

What we are talking about is how that same diocese of Jacksonville yesterday issued a formal statement denying McCarrick's presence in the diocese and that Church Militant had called them and asked questions about the information we were chasing down.

Here is the relevant part of their official statement: "It is unfortunate that Church Militant didn't contact the diocese for the truth before posting their inaccurate story."

Oops. That's unfortunate for them they would lie in an official statement. Remember: They denied we ever contacted them and asked, implying of course that we don't know how to do our jobs and are fake news.

Please listen to this recording between Church Militant and Jerome Wilamowski, who calls himself Jerry. He was returning our call.

Jerome Wilamowski: This is Jerry Wilamowski, Bishop Felipe Estevez's assistant. Just got back to my desk, got your message.

CM: Calling from Church Militant, we received a rumor today on our tip line that they're moving the former archbishop McCarrick to a facility there in St. Augustine diocese.

JW: I got your message. Bishop Estevez is actually on a retreat this week with, like, 30 other bishops in South Florida, so I did, I sent him a note with your information and your contact information to have him give you a call back when he gets a chance.

So not only did we speak with Jerry, the executive assistant to Bp. Felipe Estévez, but he himself tells us, as you heard yourself, that he had discussed it with the chancellor in the communications area.

So they did get a call from us and they admitted it. That press release is, in short, a straight-up lie.

Now part two to the story: The Catholic establishment media couldn't resist licking their chops and coming after Church Militant, trying to prove we are fake and sensational news.

Catholic News Agency editor-in-chief J.D. Flynn pounced on the diocesan statement, gleefully tweeting out that we never called the diocese: "That was a rumor circulated by Church Militant, who never contacted the diocese for information," a spokeswoman said.

Now, Catholic News Agency's (CNA) repeating of the diocese's charge is rich because they released a social media hit on us for not contacting the diocese, when CNA had never contacted us asking if what the diocese claimed was true.

So we get lied about by a diocese — formally, publicly, officially (which we have the proof of is a lie) — and then the Catholic establishment media, unquestioning, just repeats the lie.

This is exactly what Church Militant has been reporting for years, and now thanks to the phone recording, we have the proof.

And thanks to CNA's horrible reporting skills and lack of professional due diligence, we have the goods on them as well.

In journalism, we have a term for this: gotcha! 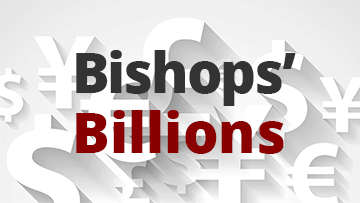