False ecumenism is scandalous, as well as sinful.

This past weekend, some of the Church Militant crew were in Le Mars, Iowa, giving a day-long conference on some pretty heavy Catholic topics like sin and Hell and the supernatural virtue of faith.

The 130 or so in attendance were very grateful for the presentations, and as what it seems always happens, people came up afterward and said thank you for our work and bringing them either back to the Faith or to the Faith in the first place.

There is something splendid and glorious about Catholic truth, and when it's announced in all its unvarnished glory, people of good will respond because the human heart and soul are ordered to truth, and when they hear the truth, they are drawn to it — like the line in the Psalms says, "Deep is calling on deep."

There is nothing more wonderful in this life, nothing more beautiful, than to have been given the gift of the Catholic faith.

My dad, God rest his soul, used to say that all the time.

We mention all this because this past weekend, some folks in the diocese of Sioux City, Iowa, approached us and let us know how incredibly upset and even offended they were by the recent action of their bishop, Walker Nickless.

For balance, Nickless has distinguished himself to a degree from many of his fellow baby boomer bishops by speaking out against Obama at Notre Dame as well as government-run health care, two things most of the other U.S. bishops have not done.

Still, a troubling event took place just a couple of weeks ago — Aug. 17 to be precise — in his home diocese.

Nickless attended the "consecration" of a Lutheran "bishop" by the name of Lorna Halaas. The 62-year-old female minister is now the "bishop" of the Western Iowa Synod of the Evangelical Lutheran Church of America.

Nickless not only attended the event but also posted about it on his personal Facebook page, as seen here.

His attendance and subsequent posting has dispirited Catholics in his diocese — angering them, in fact.

And frankly, why shouldn't they be upset? This kind of action waters down Catholicism because it appears to put Protestantism and Catholicism on the same plane.

Despite his intentions of wanting to congratulate Halaas and represent the Catholic population at the event, he should not have been there. She is not a bishop, and her Lutheran synod is not a Church, but Nickless' presence at the event lends credibility to false claims.

Bishops are the successors of the Apostles, and Christ established only one Church — period.

Does Bp. Nickless not realize the scandal his presence causes at a fake consecration of a phony bishop at a false Church?

If he doesn't, he should. Not a few faithful Catholics were ticked off at him not only going — bad enough, they say — but then, to actually post it on social media so those weak in Faith see it and think he is giving a Catholic blessing to it, that there's no real difference between Catholics and Protestants. And truthfully, what else would a poorly formed person think, what other conclusion could be reasonably drawn?

Catholics all over the country agonize about attending "marriages" of their own children and family happening outside of the Church because of this very point — the scandal — giving the appearance that all is fine.

And here comes a bishop who does something extremely similar, scandalizing the faithful, making it increasingly difficult for them to evangelize friends and family about the glory of the Catholic faith when they see him acting as if there's not really that much of a difference.

There is a huge difference. Lutherans, and the rest of the Protestant world, have no access to the Body and Blood of Our Lord.

They support contraception. This particular fake bishop supports homosexual marriage. Why is a Catholic bishop visibly, publicly supporting this? Does he not know there was a revolution over this very thing 500 years ago?

None of those issues are resolved today. This phony bishop rejects, as an article of her faith, the authority of the Catholic Church. She denies transubstantiation. She rejects the doctrine of Purgatory. She refuses to acknowledge all seven sacraments.

The list goes on and on. No Catholic bishop should ever be seen in these kinds of circumstances.

Want to shoot her a private note saying you hope you can work together on some common ground issue like saving babies from abortion? Fine, but to appear in the pretend sanctuary of a false religion in order to play nice and look all ecumenical is preposterous and certainly seems sinful if just for the scandal aspect alone.

Haven't the long-suffering faithful had to tolerate this namby-pamby milquetoast stuff enough — the constant pandering to the world, with its fake, virtue-signaling morality and plethora of false gods?

Protestantism does not worship Christ of the Scriptures and Tradition. They worship their own imagined version of Christ.

Are there similarities, of course. Do they have some things correct? Yes, but the things they have correct they got from Catholicism.

Protestantism is a heresy. It continues to foment revolution against the truth of Jesus Christ, the fullness of the truth, as found in the Catholic Church, the only place that truth is present fully.

But of course, for faithful Catholics to say all this makes us people to be condemned and excoriated for being uncharitable to other religions — and not a handful of actual successors of the Apostles don't hesitate to say so.

What a completely upside-down, crazy world we faithful find ourselves in.

Church Militant and other faithful apostolates wouldn't even exist if the authentic successors of the Apostles had been doing their jobs all along.

But no, it is us, the lay faithful, who have had to give up our secular careers and go about the country and parts of the world securing and locking down the Faith, shoring up the flagging spirits of fellow faithful precisely because the bishops do not.

They're too busy brown-nosing with the world and false religions to notice their quickly disappearing flock, a flock they will be held to account for when they stand before the Supreme Judge.

Bishop Nickless is duty-bound to issue an apology to his flock for the scandal he has personally created.

He needs to remove that scandalous entry from his social media posting and then write a letter he has read out at all the Masses about his woeful lack of prudence and apologize for the difficult bind he has put many of his own sheep into in their own efforts to evangelize.

Look, either these bishops believe the Catholic Church is everything She says She is, or they do not.

Denominations that broke from Rome do not have "bishops." They have cut themselves off from the life-giving tradition of the Church.

Nickless needs to publicly set the record straight. He should not have gone to that event.

And now he needs to repair the damage as best he can. 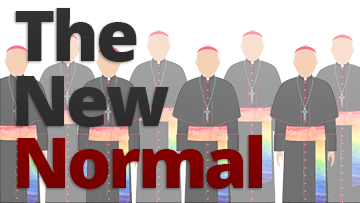 The New Normal
It must be resisted and defeated.