And So It Begins…

It's taken a while, but Church Militant has, after months and months of planning and drawing and redrawing and budget planning and all the preliminary work and producing the final drawings, we have at last been given the building permits by the city of Ferndale to proceed with construction.

The mechanical, the plumbing, the electrical, all of them are now in our anxious little hands.

We have signed with a contractor, and big machines and backhoes and so forth will be here very soon to start demolishing so we can arise from the construction mess equipped to be the very best source in the Catholic media world in bringing you all you need to know, that the Catholic establishment media tries to keep hidden from you.

Right now, our production team has already begun dismantling the Archbishop Sheen Studio and control room, which is a pretty serious undertaking.

They'll be done in about two weeks, at which time, the construction guys will be in here and start smashing down walls so we can have increased space for our entire media team — programming, marketing and production.

For the past couple of weeks, all the north building personnel have drifted to the south building, and things are now pretty crowded there — even necessitating porta-potties in the parking lot. Yeah, we know — yuk.

The ongoing construction will cause a transitional change in some of our usual programming, directly affecting mostly The Download, since the Archbishop Sheen Studio is going to be completely gutted.

Headlines will also move from the Sheen Studio and start coming to you from our current cramped newsroom. Vortex will be changing locations as well in a couple of weeks as the Mother Angelica Studio will also be coming under the sledgehammer.

After this week, Mic'd Up will also start airing on a reduced schedule as well. Now, don't fret; we aren't going away, obviously.

We are just shifting resources, so instead of those regular programs, we will be freed up to begin producing more investigative special reports — you know, the ones many of the bishops love.

Our investigations are perhaps the most exhaustive and research-intensive productions we air, and since the physical plant of the studio will be in organized chaos for a while, we are actually able to divert our resources to these productions.

To that end, we would like to point your attention to our latest — which, if you missed it, aired yesterday.

The filth and rot in the Church has got to be dragged out into the light — even though it's hard to hear and watch.

Faithful Catholics must understand just how deep and wide this all goes. 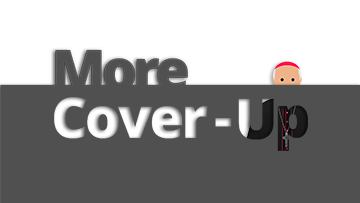