The mounting cost of being a faithful cleric.

In yet further proof of the deterioration of the hierarchy in the United States, it has now become almost blasé to hear of a priest being persecuted by his bishop on trumped-up, ridiculous charges when the reality is that the priest only spoke or preached Catholic truth.

The latest chapter in this long, growing saga is Fr. Clay Hunt of San Antonio, a priest who answers to the notoriously liberal and extremely suspect Abp. Gustavo García-Siller.

García-Siller has certainly earned his stripes in the world of being a bad bishop: He harassed the daylights out of a local parish dedicated to the Traditional Latin Mass; he tossed out three faithful nuns of Mother Angelica who went to San Antonio to help spread the Faith; he brought an openly active homosexual priest to San Antonio from Chicago (which is where he himself came from while serving as an auxiliary bishop of the Bernardin mold); and, when in Chicago, he acted like a mob thug toward a newly appointed diocesan official who was unabashedly pro-life and who was giving special collection money to pro-life pregnancy centers so they could get ultrasound machines.

The list of problems with this man drags on like a novel. He never stops going on about pro-gay or pro-immigration causes, for instance. So Fr. Clay Hunt, a faithful priest, was bound, sooner or later, to come into his sights. Archbishop García-Siller is prosecuting Fr. Hunt, alleging that he recently committed a canonical crime.

First, a little history. Fr. Hunt first angered the archbishop when he went to the infamously flamboyant homosexual mayor of his town of Del Rio, Bruno Lozano, and tried to warn him of the spiritual dangers of his very public lifestyle of supporting sodomy. After a very brief meeting in his office, the mayor called the cops and had him escorted out.

For those unaware, at a clergy meeting a few years ago where García-Siller was pontificating about illegal immigration, Fr. Hunt politely and respectfully raised his hand in front of many other priests and expressed his disagreement with the archbishop's political opinions. That didn't go over well either. So after strike two, the handwriting was on the wall for Fr. Hunt.

Church Militant viewers need to know the following: Abp. García-Siller issued a very questionable letter to the faithful on Oct. 16, 2020, rebranded for expediency as a decree allegedly commanding the faithful of the archdiocese to not attend Mass if they are sick in any way. In late October, when a faithful asked Fr. Hunt if watching Mass online was good enough for her, Fr. Hunt responded via Instagram, "You need to eat the Holy Communion" — advising her, as Christ advised, of the need to eat His real body and real blood unto salvation.

First, García-Siller's completely out-of-bounds decree is riddled with Code of Canon Law errors and ambiguities. Written with the true spirit of Vatican II verbiage, it's loaded with vague terms that can be construed however the reader chooses. For example, he orders Catholics with a "chronic health condition" to "remain at home" and not come to Mass. Like what, for example? Eczema? Low bone density? Migraines? Type-2 diabetes? Bipolar depression?

It was likely drawn up by Fr. Martin Leopold of the archdiocese, the moderator of the curia known for schlocky, slipshod work.

A couple of weeks later, Fr. Hunt posted an Instagram video where he said in part, "I hope you go to holy confession and the Holy Mass."

His words "I hope" closely parallel García-Siller's own words in the decree he signed in October that said "I strongly encourage" Catholics to go back to Mass. But that didn't stop the archbishop from seizing on Fr. Hunt's post and using it as a pretext to finally nab him. He issued a formal decree against Fr. Hunt and is pursuing a case of criminal prosecution against him, leveling the very serious charge of inciting the faithful to disobedience against the archbishop, as laid out in canon 1373.

This is mind-blowing: a Catholic priest encouraging the faithful to receive Holy Communion is being prosecuted for criminal, canonical incitement to hatred, animosity or disobedience against the very archbishop who has actually commanded that the faithful of the archdiocese of San Antonio who are sick in any way to not go to church and to actually stay within the four walls of their homes as if they should be imprisoned.

For the record, Fr. Hunt did not even come close to committing the alleged crime. García-Siller has royally abused his ecclesiastical power and office by prosecuting Fr. Hunt for a crime that, on its face, he never committed.

If anyone should be prosecuted, it is Abp. Gustavo García-Siller for violating canon 1389 of the Code of Canon Law. The Vatican needs to step up and remove this power-drunk, abusive prelate from office. It is scandalous that Pope Francis continues to entrust the archdiocese of San Antonio to this man. For the sake of the spiritual welfare of the faithful of San Antonio, he needs to be removed now.

It is scandalous that Pope Francis continues to entrust the archdiocese of San Antonio to this man.

Twisted bishops all over the country have great powers over the priests at their disposal, and such men can use and abuse those powers to destroy good, obedient priests. And in the current climate of homosexuality-loving prelates who have made consort with and committed adultery with the spirit of the age, like any dissolute father, they abuse their children.

Church Militant recently talked to Fr. Hunt about his side of events so we could get it on record and help show the wickedness of this archbishop. At this point, with all that background, we're going to invite you to view our interview with him in its entirety. It's only about 15 minutes long, but it gives you a very good look at the inside machinations of the hierarchy as they try to destroy good priests.

If you'd like to help Fr. Hunt's case, a fundraising account has been set up to help defray his legal expenses.

Church Militant has been saying this for years: There is something really wicked in the hierarchy, and here's yet another example. 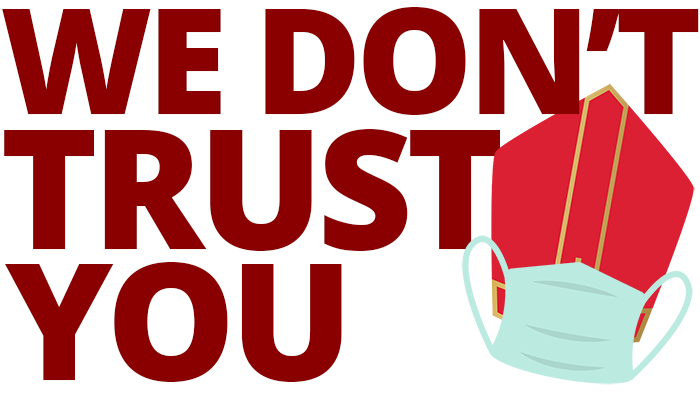 We Don’t Trust You
And there's no reason to ever trust you again.