A greedy, self-serving bunch if there ever was one.

It's time once again for the Fourth of July celebrations in America to get rolling and we thought we'd take the opportunity to point out a little something, a two-headed hydra, the Democratic Party and the U.S. bishops' conference.

First, let's look at the Democrats and this guaranteed losing stance.

Yep, all 10 Dem candidates on stage last week promised that their plan is to take your tax dollars and pay health care costs for illegal immigrants, and some of those tax dollars coming from actual citizens who don't have health insurance themselves.

Turning to the second head of the hydra, the U.S. bishops have more than a dozen times issued pronouncements against Trump's enforcement of current immigration laws, some of the exact same laws that Obama used to enforce.

Curiously, when Democrat Obama would make speeches or give interviews about illegal immigrants, the U.S. bishops just let it slide.

And why would the bishops not thunder against Obama, you might ask. That's a good question. A question for the record that the Catholic establishment media never asks, because they can't tick off their meal ticket.

There are really two reasons the bishops are down with open borders and staging photo ops at the border, and running off a flood of press releases damning Trump.

One reason is their miserable track record of running the Church has resulted in a depressing demographic reality.

For decades, Catholics were about 25% of the total U.S. population — for decades.

But as the Church of Nice, modernist homoheretics slowly tipped the scales and got control of the levers of power, the population of Catholics relative to the total population began to shrink.

Today, it's down to about 21% of the population. And here's the truth under those numbers, white European-descent Catholics, in relation to the total population, comprise only about 13 percent.

Most illegal immigrants in the United States come across that southern border and are majority Catholic, so the bishops have latched onto that reality and are using it to shore up their flagging numbers in the pews.

But more than that, money is the overwhelming factor.

Look at these financial numbers from 2016 for Catholic Relief Services (CRS) and Catholic Charities.

The bishops are getting literally hundreds of millions of dollars from Uncle Sam, and much of this money is earmarked specifically for coping with illegal immigration and refugee resettlement efforts.

The government is not really equipped to administer programs of this size, so they contract the work out — in this case, a half-billion dollars worth of contracts to the bishops.

Interesting to note, the U.S. bishops get as much money from Washington as Planned Parenthood gets.

And here's another deception by silence on the part of the bishops, they never tell people in the pews when they take up the annual collection for CRS and Catholic Charities that, presuming you are legal and a taxpayer, that you have already contributed to these collections through your taxes.

When Obama first came to office, the USCCB was directly paid a whopping $91 million dollars for Syrian refugee resettlement programs.

As a result, one out of every three dioceses in the country suddenly opened up a refugee resettlement office to cash in.

In fact, another $30-plus million also poured directly into the bishops coffers from Obama's White House for other programs.

The child killer in chief must have been very grateful to the mitered class for having delivered him the majority Catholic vote in '08.

But for the supreme show of hypocrisy from the bishops who are always so chest-thumping about welcoming the stranger and so forth — look at the places most of them live.

You couldn't get past the gates or over the walls with a small army, and of course, Church HQ itself is completely surrounded with a gigantic wall built specifically to keep out potential Muslim invaders, along with others.

And that's because walls work, which is why so many of the hierarchy have themselves safely ensconced behind them, including the Pope.

And oh yeah, if you somehow manage to get around or over those walls, you'll get shot and killed — so much for the death penalty being "inadmissable," to quote Bishop Robert Barron.

The U.S. bishops are simply opposed, flat-out, to border security in complete lockstep with their Democratic sugar-daddies.

They make the irrational argument that the "first duty" of government is to welcome the foreigner and the stranger, specifically as the Immigration Office at USCCB HQ says "to welcome the foreigner out of charity and respect for the human person. Persons have the right to immigrate and thus government must accommodate this right to the greatest extent possible, especially financially blessed nation."

This is a total perversion of Catholic teaching; it's Democratic Party talking points made to sound like Church teaching.

The bishops say the "second duty (of government)is to secure one's border and enforce the law for the sake of the common good."

So let's think about this. The first duty of government is to let everybody in who wants to migrate, and the second duty is to enforce the borders.

Well, if you are letting everybody in, then what need does America have for borders and if anyone who want to migrate to the United States gets to come in, how long before the government no longer exists?

A nation is defined by its borders in the most fundamental reality.

But all of this would actually be an argument worth having if the bishops were not getting cumulatively billions of dollars from the government, much of which has been severely cut back by President Trump, and they themselves were actually not living behind walls and or had immigrants sleeping in their palaces.

Those swanky digs up in the woods of New York that Cardinal Dolan commandeered for himself — remember, that $4 million pad — it sure looks like you cram a few dozen immigrant families in there, Your Eminence.

Hypocrisy, money, privilege, sucking at the teats of the Democrats — what a dastardly lot.

Exactly how does a hierarchy maintain any independence when its very infrastructure is supported by federal tax dollars?

Want to know why pro-abort Catholic Democrats are never denounced? Just look at the issue of illegal immigration, the wall and the money handed to them and you have your answer.

When the basket gets passed next time in your parish to contribute to any of this, drop in a note saying, "No thanks, I already paid you with my taxes." 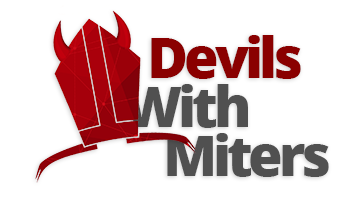 Devils With Miters
They hate Christ and His Church — just like Judas did.