What is substantially different between the Nazi Party or the Communist Party and the Democratic Party? The Democrats are contemporary communists — period. Calling them mere socialists is way too kind, not to mention a bit of an insult to socialists everywhere. And it tells you the state of the U.S. hierarchy, that not one of them is willing to stand up and condemn these killers. And yes, they are killers.

Whether it's from abortions or inoculations, they are killers. And now they have their sights set on religion, specifically. Vastly underreported, if at all, is this little nugget.

Within the Biden State Department is the Bureau of Democracy, Human Rights and Labor. Last year, Biden's DRL launched a grant program aimed at "protecting and defending the religious freedom of atheists, humanists, nonpracticing and nonaffiliated." Since when does religious freedom incorporate those who reject religion? Or has the definition of that been changed as well, along with "recession" and "woman" and "pregnant" and "chest feeder" and so forth?

The point of the half-million dollar grants, referred to as "expected outcomes" for use in poor countries in Asia predominantly, is to help institute a globalist view of religion where atheism is protected. Particularly for atheists, the program seeks "increased capacity among members of atheist and heterodox individuals to form or join networks or organizations."

It's a pilot program designed to test the waters, so to speak, to see what works best in terms of asserting atheism as on par with religion — so on par, in fact, that it's actually counted as a religion. Religions universally believe in God (theism). Atheism universally rejects God. That's the definition and the difference — theism versus atheism. But then again, we know that definitions don't really mean what they used to, at least not in D.C. and in the communist Democratic Party.

Calling them mere socialists is way too kind.

Words mean whatever you want them to mean. That is the prevailing reality in the contemporary world. That, of course, is an offshoot of the philosophy of relativism: There is "no such thing as objective truth." You have your truth, and I have my truth. That's how it works. But, in truth, that's just an aphrodisiac for the mentally impaired, the rank and file of the communist Democrats.

The leadership of the communist Democrats fully accept the idea of objective truth and definitions. That's how they can label parents as "domestic terrorists," for example. If words truly had no definition, and therefore no meaning, how could they write laws to jack up inflation, raise your taxes, impose climate change nonsense, charge citizens with acts of insurrection and so forth?

Of course, the communists believe in definitions. They just profit from idiots willing to accept their propaganda that words don't really have any hard and fast meaning. Which brings us back to the hierarchy, the men who have adopted this philosophy in their decisions to act and, oftentimes, not act. For example, "dialogue" and "listening sessions" and "accompaniment" and "journeying" — just precisely what do those terms mean? What is their definition?

Exactly as is the case with their communist "allies" in the political order, they have constructed a fluid dictionary and imposed it on the sheep. All the while, they themselves completely reject it. It's a smokescreen to ensure they keep abusing their power and crafting the narrative.

Perhaps nothing drives this point home more than the anthem of the Church of Nice: "All are welcome."

No, all are not welcome, far from it. See, the fraud here is in the word "all" and its apparently fluid definition or meaning. It really means only those who accept our version of "Church." And here, even the definition of "Church" doesn't mean anything. You will note that Church Militant has made the correct observation for years now, that whatever we see advancing in the woke culture was first advanced in clerical circles.

Everything rotten in the culture we see currently playing out appeared first within the ranks of corrupt clergy, in some cases, decades before the general populace. Homosexuality, indifference to child murder, meaningless definitions — you name it. It started with a corrupt clergy. It's why we see no rush on the part of that clergy to label the Democrats precisely what they are: communists.

It's a smokescreen to ensure they keep abusing their power.

In fact, what we see is support of them and their nation-destroying policies that support being wrapped up in spiritual-sounding themes like "justice" and "love of neighbor" and "tolerance" and all the rest of that propaganda.

The U.S. hierarchy has aligned itself with the regime of oppression, and the current situation will go either one of two ways:

In either case, the hierarchy could be on the wrong side of the outcome — cooperators in the regime or part of the defeated enemy of the people. Neither is a good look.

The U.S. bishops, collectively, have put their feet on a path that will lead to the immolation of the Church in the United States. Their collective refusal to announce the truth of the Deposit of Faith, exactly at a time when that announcement is most needed, has doomed them and, very likely, the entire nation.

They will continue to profit for a while, but, like so many fools before them, they too will learn that when you ally yourselves with anti-God forces, they will soon turn on you as well. Remember, "Catholic" Joe Biden, who they helped get into office, says that religion includes rejection of religion; that belief in God also means rejecting belief in God. 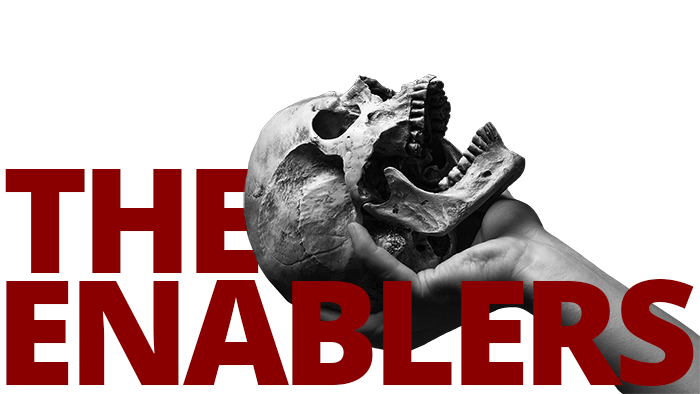 The Enablers
And they went away very sad.