And you are damned.

Last week, the United States Senate voted and, fortunately, failed to shut down a filibuster on the most radical abortion bill in the nation's history.

Joe Biden (phony Catholic that he is), despite ashes on his forehead on Ash Wednesday, promised to sign the bill into law if Congress sent it to him. Blessed be God, he will not be given the opportunity, since the bill failed to garner sufficient support in the Senate to allow it to move forward.

But here's the point: While the likes of Joe and Nancy get a lot of the press over issues related to their evil, there are loads of other phony Catholics who are still there on Capitol Hill working diligently to kill and destroy. And the U.S. bishops say nothing about them.

The floor of Hell is paved with the skulls of bishops.

Here's a list of those "Catholic" senators who voted to kill children right up until the moment of birth:

So there are 13 child-killing Catholics sitting in the U.S. Senate whom bishops have barely ever uttered a word about (with the one exception of Durbin from Illinois — who Bp. Thomas Paprocki of Springfield told to stay away from Holy Communion). These senators should all be made a massive example of and excommunicated.

They aren't Catholic in any meaningful (or even remotely meaningful) way, and, yet, they are allowed to present themselves as Catholic.

And consider this — the bill they all supported allowed children as they were emerging from the birth canal to be killed.

It's true that the bishops' conference issued a statement about the bill itself (whoopty doo!) but, in a classic example of bringing a glass of water to a forest fire, did and said nothing about the phony Catholics supporting the bill. The U.S. bishops act like these proposed laws just fall from the sky, like they have some existential life of their own.

They come into existence because of phony Catholics like those 13 we just named. So the question the faithful have to consider is pretty simple: Do the bishops care enough?

It's not just whether they care. I think we can be pretty charitable in any assessment and say that if the bishops could simply push a button (that's it, nothing more) and abortion would be gone, it's a fairly safe bet that each bishop would.

But the world doesn't have a bunch of buttons where all you need to do is push them and evil is wiped out. It requires action, love, concern, a passion for justice — and all of that requires, first, that you care enough to do the hard work involved.

Wiping out evil, attacking it, crippling it, saving others from its destructive, corrosive effects requires hard work, tenacity, courage — all of that and more. But before any of that can kick in, you first have to care.

The destroyer of souls is a lack of charity.

Care arises from charity — something detectable in a person by observing how much they care. There simply cannot be any care or concern if there is not first charity, and, likewise, a lack of care or sufficient care is proof of an absence of charity.

From that absence of charity, many other things likewise become apparent. The great destroyer of souls is (at the end of one's life) a lack of charity. And a lack of charity can simply be summed up by one single word — apathy.

We know from the saints, doctors, fathers, mystics and so forth that the vast majority of humanity will be damned. Most of humanity are not Hitlers or traffickers of child sex rings or drug cartel overlords or mafia assassins or bank robbers or serial killers — in fact, far from it.

They are just apathetic losers concerned for no one except themselves and their own interests, unwilling to become involved, fight and oppose evil — in short, to do the right thing.

And it will be that lacking that will be their damnation. No wonder the floor of Hell is paved with the skulls of bishops. 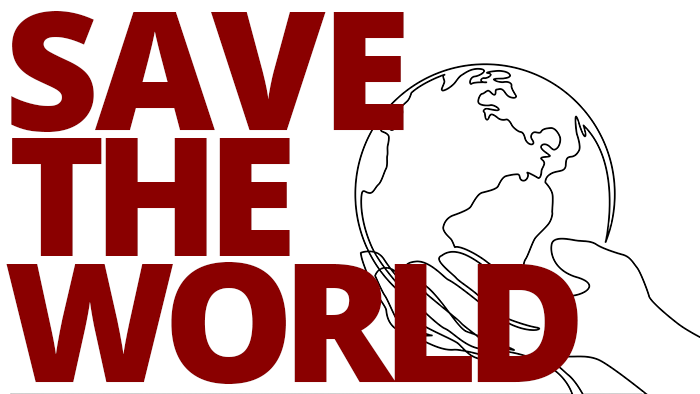 Save the World
It's why you're alive.