An Italian politician caused a political upheaval last week when she said Bill Gates needs to be arrested on charges of crimes against humanity.

The comments exploded across social media because of the underlying issue following Bill Gates — he's a fan of a smaller human population.

And while he routinely pushes contraception and abortion as a means to lessen or decrease the number of new arrivals on the planet, there's another concern about him that raises even more eyebrows: It's his vaccine-mania.

Through the Bill and Melinda Gates Foundation — by the way, wife Melinda is baptized Catholic and a huge supporter of contraception to decrease the population — the Foundation carries out the work of trying to shrink the number of humans.

Sara Cunial of the Italian Parliament attacked her own government's heavy-handed and destructive response to the Wuhan crisis, saying it was carried out under the influence of Gates. She then went on to brand him as a "vaccine criminal."

She also called out the link between the World Health Organization (WHO) and Gates' funding of it, and caused further uproar when she tweeted out that Gates and his vaccines were just a means to "free genocide," noting that Gates is vaccine-happy in poor countries.

Recent news reports revealed Gates offered what amounted to a $10 million bribe to the Nigerian House of Representatives for a forced vaccination program for the Wuhan virus. Politicians in Nigeria turned down the offer, flatly.

The subject of the vaccine-happy Gates' particular focus on youth has not gone uncommented-on, either. None other than Robert F. Kennedy Jr., nephew of President John F. Kennedy and chairman of the Children's Health Defense, is on record on the CHD website saying: "Vaccines, for Bill Gates, are a strategic philanthropy that feeds his many vaccine-related businesses (including Microsoft's ambition to control a global vaccination-ID enterprise) and give him dictatorial control of global health policy."

In 2000, Gates was allowed into India to direct the nation's immunization effort against polio. Under his leadership, up to 50 doses of polio vaccines were administered to enormous numbers of Indian children before age five and hundreds of thousands of those children became paralyzed over the next roughly 20 years.

While he was advancing his polio effort in India, he started up another vaccine program testing experimental HPV vaccines, designed to protect against sexual infection. In one year alone, 2009, 23,000 young girls were inoculated. According to Kennedy, 1,200 suffered severe side effects, with seven young girls actually dying.

As if India wasn't enough, Gates took his vaccine tour to Africa where 50 of the 500 vaccinated children developed paralysis. The Left is always yammering on about colonialism, but apparently it's okay for leftist white men to use a nation to advance their social engineering, especially a black nation.

Newspapers in South Africa took note: "We are guinea pigs for the drug makers," blared the headlines.

So why does any of this matter beyond the level of pure disgust? Because Gates' money opens whatever doors he wants opened, and right now, vaccines are all the rage.

There's a love triangle between Dr. Anthony Fauci, the WHO, and Bill Gates — an interrelationship that many are becoming extremely bothered by, particularly in light of leftist governors talking about "mandatory" vaccines and penalties for refusing.

Lots of ideas are being dropped into the media about travel cards, certificates to prove you've been vaccinated before going into stores and so forth.

Perhaps the wisest advice on all this is from that same Italian minister of Parliament who said a resistance must form against the lockdown measures and a refusal to submit to any mandatory vaccine program that might be presented by Gates and his allies in the medical-industrial complex.

This story is only now taking shape. Be assured, there is much more to come — much more. 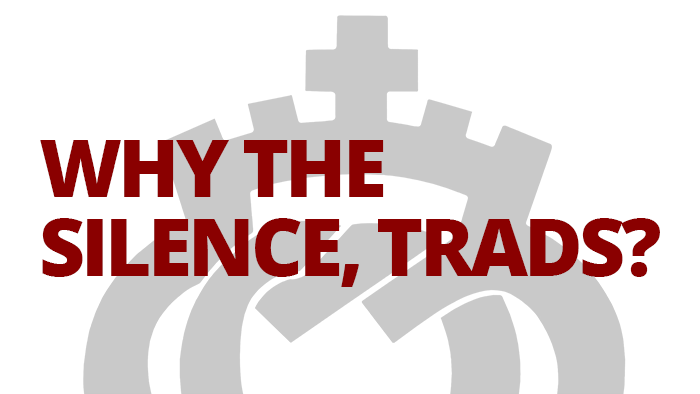 Why the Silence, Trads?
What if it was your child?