Every Democratic leader in the country should be immediately arrested and imprisoned for the nightmare they put America through these past six months over the Wuhan virus. Very quietly (with no fanfare, no press releases, no long interviews on any major media outlets), the Centers for Disease Control (CDC) updated their charts on their homepage.

And pay close attention to the timing of this update by the CDC, which will become clear in a moment. About 10 days ago, the U.S. Department of Justice (DOJ) announced it was going to be investigating governors that forced Wuhan patients into nursing homes.

That would include Gov. Cuomo in New York and Gov. Whitmer here in Michigan. Thousands and thousands of patients were officially recorded as having died from the disease in those homes. And then — lo and behold — the CDC very quietly, just a couple days after the DOJ announcement, updated its COVID death numbers to greatly reduce those who died solely from COVID.

What they updated it to is the truth at last. The truth that reveals this entire Wuhan debacle was another planned effort to get Trump. Look at this (again, right on the CDC website for the whole world to see): Of the roughly 170,000 deaths in the United States from the China virus, only 6%, about 1 in 20, were strictly from the virus.

The other 19 out of 20 occurred if and when some other disease was already present; in fact, there was often more than one disease. On average, 2.6 other serious ailments were present besides the Wuhan virus that brought about death, according to the CDC.

People died who had severe respiratory illnesses or liver failure or severe cases of diabetes, renal failure and so forth. The CDC provides a pretty comprehensive list, in fact, of all the other health issues that needed to be present on top of Wuhan to die from it.

But the question is, if someone already had severe diabetes and renal failure and respiratory illness, and then they caught Wuhan, is it accurate to say they died from Wuhan?

What we do know is that no sooner had the Wuhan appeared than the entire Left saw and seized an opportunity for their own political gain.

So what's really going on here? We all know. These Marxist monsters were not only willing — but actually complicit — in destroying the greatest economy in the history of the world just to make sure Trump did not get reelected.

"Russia, Russia!" didn't work. Ukraine didn't work. Impeachment didn't work. His personal taxes didn't work. Stormy Daniels didn't work. Nothing worked against Donald "Make America Great Again" Trump. Nothing. Ah, but if the Marxists could develop a way to destroy the economy, that would be their ticket.

Then they could not only destroy the lives and livelihoods of tens of millions of Americans and run up the national debt by trillions more — but, but, but — they could then say it's really all Trump's fault because he didn't prepare correctly.

There's no way to know (big picture now), at least right now, if the Marxist Democrats actually conspired with the Marxist Chinese in the development and release of the virus in the first place. But given their level of evil (remember, they kill children by the tens of millions), why not?

Why couldn't this be some gigantic masterplan cooked up by the Marxists in Washington, D.C. and the Marxists in Beijing? Heck, given the coziness of the Beijing Marxists and the D.C. swamp Marxists with the Vatican, you can't dismiss the possibility that the evil homopredator McCarrick doesn't have his finger in all this.

Remember, Church Militant was the first to uncover last year that McCarrick was communist-trained at an indoctrination center in St. Gallen, Switzerland; he was a man who had secret offshore accounts, according to our sources, funded by the Kremlin.

Let's face it, to bring about global domination would require a global effort. World domination, the stated goal of Marxism, doesn't just happen all by itself. But since we can't know any of that definitively, at least not yet, let's lay it aside.

What we do know is that no sooner had the Wuhan appeared than the entire Left saw and seized an opportunity for their own political gain. They brought the economy to a standstill. They locked down the country, state by state. And their Marxist media allies trumpeted the narrative.

Stay home. Don't breathe. Never come outside again. Give people "free" money for the next year. Shut down the schools. Close up everything. Leave no stone unturned. The virus must be eradicated from every cellar, every chimney, every mailbox in America.

No one is safe: People will die by the millions. Tens of millions. There was and still is no end of the hysteria. Every day, the COVID News Network, CNN, is right there with what amounts to a fake body count (rather, actually is a fake body count because no distinction is made between those who died from the virus and those who died from a combination of many things).

Ninety-four percent of people listed as dying from Wuhan actually died from Wuhan and three other diseases acting in combination with each other. To skip over that inconvenient fact should result in complicit media being arrested and put on trial and then imprisoned for the rest of their natural-born days.

They abused their power, their "journalistic" freedom so wickedly that they brought about enormous suffering — and even death — to untold numbers of Americans. They caused suicides, mental illnesses, drug and alcohol addiction and people's failure to seek medical help for fear of being near a hospital.

And all along, the Democrats and their media pals lied to you, deceived you, drove you to near panic — all for the sole purpose of getting Trump. They drummed up and manufactured a "scamdemic" and made you pay the cost. None of them were touched by the consequences of their own evil — just tens of millions of others.

Let this sink in: Only 6% actually died directly from Wuhan. Six percent. That's approximately 10,000 people. Tragic, of course, but a small number (relatively speaking). The other 160,000 died from a combination of multiple diseases; Wuhan was just one in the mix.

You've been lied to by the Democrats and the media. Many of your lives have been destroyed, your businesses wiped out, your families left under crushing economic conditions. There is no end to the evil the Democrats will inflict on anyone to accomplish their goal.

They would gun you down in the streets if they thought it would help, and that is precisely what they will do if they win in November. This party, at least the leadership, is not composed of Americans. They are straight-up communists who want America destroyed.

And, for the Catholics listening to this, remember: Many of the U.S. hierarchy (the bishops and their staffs) are dyed-in-the-wool Democrats. They have no supernatural faith. They don't believe. They protect homopredator clergy. They lie to you, take your money, give no care whatsoever about the eternal destiny of you or your family.

The election is two months away. Remember all of this. Remember in November.

They are straight-up Marxists who disguise themselves as social justice warriors supposedly caring for the poor. They are in league with Joe Biden, Nancy Pelosi and all the rest of them. That's why they never condemn them, never speak a word against them, give them the Sacred Body and Blood of Our Lord — adding sacrilege to their list of crimes.

This is a giant ideological conspiracy — if not an actual one. It is a Marxist effort to defeat Trump at all costs, even faking a pandemic. The 10,000 Americans who've died directly from Wuhan doesn't even crack the top 10 on the list of causes of death each year in America.

According to the CDC, the top 10 causes of death in America are as follows:

Five times the number of people died from committing suicide than those who died directly from Wuhan. America, you've been had; brother, have you been had! In the calculation of the Marxists, including those in the Church, America is the last obstacle on the world stage to global domination. And Trump is the central figure espousing American greatness.

And they are all Marxists. Wake up, America, wake up. And for you duped Catholics who have allowed yourselves to be taken in by these crooked men in miters in league with all this, denied Mass and the sacraments and the normal spiritual life, you need to rise up and rise up now.

The election is two months away. Remember all of this. Remember in November. 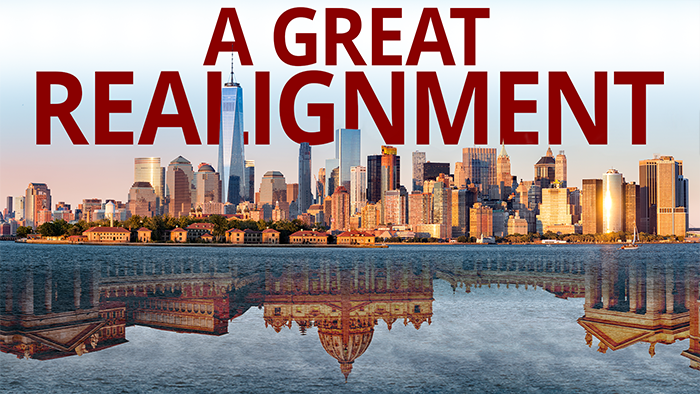 A Great Realignment
And it's a good thing.