Who are fighting back.

I'm Michael Voris coming to you from the St. Benedict Center in Richmond, New Hampshire, where the small community here of faithful, committed Catholics is coming under attack from their home, the diocese of Manchester.

These are the Slaves of the Immaculate Heart established by Jesuit Fr. Leonard Feeney, S.J., in 1949, and this particular community was born in 1989.

The attack is centered around the group's adherence to the Catholic dogma "outside the Church there is no salvation" —  in Latin known as Extra Ecclesiam Nulla Salus or, in shorthand, EENS.

And yes, you heard correctly, a group of faithful Catholics is being attacked by the local diocese for believing and teaching a magisterially defined dogma of the Faith, reiterated even as recently as last year by Pope Francis and the Congregation for the Doctrine of the Faith.

Br. Andre Marie: What effect has that had on the community? The effect has been utterly devastating. Not only on the brothers and sisters but on our school children, our school teachers, all of the community members, because we have lots of people who would go to daily Mass and (which isn't allowed to be offered anymore) — no, we have an empty tabernacle that we have left opened just to remind us that Our Lord is not there.

In recent years, the climate in the Church has made a definitive turn away from tradition, and those concerned about this have serious misgivings about what's going on here at St. Benedict Center.

CJ Doyle: There certainly does seem to be an attempt to inflict all sorts of petty humiliations on them over the years. There seems to be an animus against their traditional beliefs and practices. And by the way, this is one of the few Catholic communities and few Catholic religious orders that have been completely untainted by any charge of sexual abuse or that kind of misconduct. So why are they going after a group of innocent, unoffending, traditional Catholics while they tolerate so much dissent, so much scandal and, frankly, so much corruption elsewhere.

CJ Doyle has no official connection to the center or the community, but he is a member of a group that supports their evangelization efforts and traditional expressions of the Faith: "Why would you go after a group of Catholics who are both faithful and who are effective in promoting the Faith when you have so much scandal and so much corruption elsewhere?"

The individual responsible for the attacks from the diocese is Fr. Georges de Laire, who shortly after being promoted to judicial vicar of the diocese about two years ago, began launching the broadsides against the center.

Diocesan insiders tell Church Militant the attacks are designed in part by de Laire to improve his image in Rome so he can climb the ladder and be promoted. So he whipped up some spurious claims of heresy against the community and began hurling weighty canonical measures against its members in an effort to gain attention.

That process became complicated by a misunderstanding of one of Br. Andre Marie's replies, and de Laire jumped on the opportunity, issuing a letter this past January stripping the community of its ability to have a diocesan-approved priest offer daily Mass, which had been the case for close to a decade.

Church Militant contacted Fr. de Laire, as well as other diocesan officials, asking for an interview about this whole situation, but that request unsurprisingly was rejected.

It's clear that de Laire wants the community to simply give up and move on, and he's making life very difficult for them in the meanwhile.

To be clear, the group does not preach heresy — not in the slightest — and in fact, de Laire could find himself in hot water for insinuating such a false and defamatory claim because he, in effect, is positioning the group as heretics for propounding a defined dogma of the Faith.

The diocese of Manchester launching these kinds of attacks is bringing an unwelcome spotlight on the diocese and its unpleasant history, something which likely doesn't sit well with the bishop, Peter Libasci.

CJ Doyle: The diocese of Manchester is a relatively small diocese, but it is one of the more troubled Catholic jurisdictions in the United States. More than 60 priests and religious order brothers have been credibly accused of sexual abuse. A former bishop and a former auxiliary bishop have been rather notorious for moving molesters around and protecting them. We had the chancellor of the diocese and the public face of the diocese Monsignor Edward Arsenault who went to prison for a few years ago for embezzling hundreds of thousands of dollars in church funds to maintain a lavish lifestyle and to support the lifestyle of his same-sex paramour. And another priest who was a friend of Father Arsenault, Father Lower, committed suicide a few years ago after being accused of sexual abuse. This is one of the more really problematic diocese in the United States.

Brother Andre Marie is insistent that what is being charged is completely fallacious and that they are 100% faithful to the teaching of the Church.

Br. Andre Marie: We believe that we're faithful to the teachings of the Church. We wouldn't be so confident about taching the necessity of the Church for salvation if we didn't have that on a divine assurance from the one institution on earth that is competent to teach man how it is we are saved. I believe we hold the Church's teaching on no salvation outside the Church as the Church has always taught it.

Church Militant has learned that in response to the canonical precepts imposed by Fr. de Laire in January, the members of St. Benedict Center have filed hierarchical recourse against the measures before the Holy See and prayerfully await a decision. They have also retained civil counsel should any litigation in the civil courts become necessary.

In the meantime, they continue their remarkable work through the suffering.

Br. Andre Marie: It's very tragic. It is utterly devastating to go into a place where you used to go to and kneel and pray to Our Lord in quiet prayer and now he's not there. I mean, he's everywhere by his omnipresence, but he's not there sacramentally in the tabernacle. So it's been devastating. It's been a real moral blow to the community.

Anyone who would like to support the exemplary brothers and sisters of the St. Benedict Center, please just click on the link provided to help them out. Fighting off the attacks is not only costly spiritually, it also can bring a hefty financial bill as well.

Coming to you from the St. Benedict Center in Richmond, New Hampshire, this is Michael Voris for Church Militant. 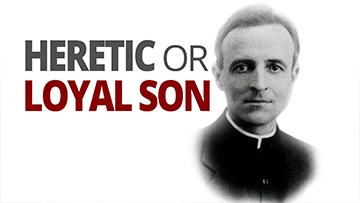