One of the common plagues on the Church since the Second Vatican Council is the constant stream (flood really) of words. For example, the documents of Vatican II — the Church's 21st ecumenical council in 2,000 years — produced more words than the previous 20 ecumenical councils combined.

Likewise that's true with papal encyclicals, which historically over the past 2,000 years have averaged about 6,000 words up until Pope John Paul. St. John Paul was not exactly known for his brevity, averaging about 27,000–28,000 words per encyclical.

And it's only getting worse under Pope Francis, for example, who tips the word scale at more than 30,000 words per encyclical — with the highly controversial Amoris Laetitia being the longest encyclical ever written in the Church's two millennia, blowing the word count into the stratosphere at 60,000 words, roughly 10% of the entire Bible.

In fact, the documents, instructions, exhortations and so forth flowing out of the Vatican since Pope Francis was elected are among the most confusing assemblages of blather and bravado and confusion in the annals of human history, much less Church history. In his 2019 post-synodal exhortation Christus Vivit, Pope Francis actually cites himself 64 times in his own 299 paragraphs. For those of you at home keeping score, that's about every fifth paragraph that he cites himself as evidence of his own positions.

So no one should be shocked or dismayed with the recent document released by Rome about reforming parish life and making it more centered on evangelization. The 24-page document from the Congregation for the Clergy is called "The Pastoral Conversion of the Parish Community in the Service of the Evangelizing Mission of the Church."

You know straightaway from the title that if you read this, that's about two hours of your life you will never get back.

The documents, instructions and exhortations flowing out of the Vatican since Pope Francis was elected are among the most confusing assemblages of blather, bravado and confusion in human history.

At the heart of a process of renewal, instead of passively undergoing change by supporting and going along with it, there exists today the need to individuate new structures that will incite all those who make up the Christian community to fulfill their vocation to evangelize, with a view to a more effective pastoral care of the People of God, the "key factor" of which is proximity.

That's so incoherent, it could have been said by Joe Biden. And here's one more, "Pastoral activity needs to go beyond merely the territorial limits of the parish, to make ecclesial communion more clearly transparent by means of the synergy between ministers and diverse charisms, structuring itself as a 'pastoral care for all.'" That's brilliant —spectacular!

The document was composed specifically in view of the massive merging of parishes and shortage of priests — in other words, in view of the collapse of the institutional structure of the Church, brought to you by the gay and Marxist, lying, thieving, cheating clerics.

Well, a couple of thoughts here — neither of which (surprisingly) made it into the document. First of all, thanks to the gay and Marxist, lying, thieving, cheating clerics and their work of destroying the minds of the faithful for decades, what precisely would the low-information Catholics in the pews go out and evangelize about?

They don't know anything, except how to not judge and the shake of peace (which they aren't allowed to do anymore). The Church of Nice, in doing nothing except teaching them to be nice, has also reduced them to being terribly boring. Who exactly would want to spend any time listening to a bunch of middle-aged Karens and Susans-from-the-Parish-Council telling them about being nice?

That doesn't exactly fire one up, does it now? The refusal on the part of bishops to encourage Catholics to confront the culture instead of playing footsie with it has turned the laity into a bunch of wimps. St. Peter, on Pentecost, practically kicked the door open and confronted the Jews saying, "This Jesus whom you crucified God raised from the dead."

Who exactly would want to spend any time listening to a bunch of middle-aged Karens and Susans-from-the-Parish-Council telling them about being nice?

And that day, about 3,000 were added to their number. No confronting, no conversions. The major parish mergers — which, for the record, mean the great shrinking of the Church — taking place all over America are forcing a new way of doing business, according to the document. That's where the wildly nutty idea of having uncatechized Catholics hit the streets catechizing people comes from.

Maybe the crazies in the evangelization offices in Rome and U.S. chanceries have never heard the philosophical maxim "You can't give what you don't have." So that attempt will fall flat on its face.

But as to the suggestion of doing things a new way, having people think outside the bounds of their own parish's territorial footprint to join with people in other parishes and do evangelization — well, there Rome may be on to something. In fact, what Rome has unwittingly described is exactly who we are and what we do here at Church Militant: We represent a new way of evangelizing where people from different parishes join together and evangelize and catechize our neighbors.

Tens of millions of people, not all Catholic, have viewed our work and spread the word. Church Militant has become a lightning rod of orthodoxy, and that's the part the Vatican may not be particularly fond of. The simple reality is this: You cannot evangelize or catechize Catholics these days because you are beginning at a deficit.

What most Catholics (as well as non-Catholics) think they know of Catholicism is not correct. They have been propagandized by liberal, homosexual, thieving, lying, Marxist-minded, unfaithful clergy and their lay allies for decades. All of that must be unlearned.

Part of the "unlearning" process dictates that how this all came to pass be exposed. And that necessitates the revelation of the evils many of these men have subscribed to for a half-century — how they wrecked and abused the Liturgy, pushed a false ecumenism, straight-up lied about Church teaching and on and on.

Likewise, we have a rapidly expanding Resistance movement being activated all over the country — Catholics from different parishes getting together and making their mark outside their parish territory. They challenge "the swamp" every time they encounter it, and we mean the swamp in the Church, which is also part of the D.C. swamp thanks to the bishops' conference.

So yeah, despite its gobbledygook and nutty prose all over the latest document, we here at Church Militant couldn't agree more forcefully. Rock on, Rome! The Church needs to get out of the old pattern of parish territories and all that. When Pope Francis told the masses way back near the beginning of his pontificate to "make a mess," Church Militant took that to heart. We do it — every day.

But unlike the babble, blather and bluster coming from the old guard, we traffic in the currency of clarity. It's what Catholics do, after all, just like Our Blessed Lord. 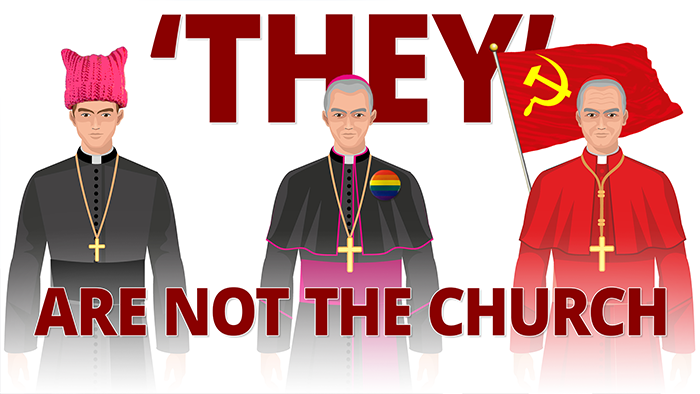 ‘They’ Are Not the Church
And in Hell, they will be forever cut off from Her.