A load of empty words with no power to save.

Do you remember the two shocking synods in October of 2014 and 2015? Lots and lots of controversy as it became increasingly clear that something completely crooked was going on. One of the leading behind-the-scenes characters was Washington, D.C.'s Cdl. Donald Wuerl, who kept pushing the ridiculous notion that you can change the practice of something without causing a change in the doctrine — sort of like they don't really have anything to do with each other. Sure they don't.

Among various cardinals and archbishops, Wuerl was out front in describing the synods as what he termed a "language event." Whatever the synods were, they certainly were that — events where language was completely distorted and twisted into meaning something that the words themselves did not say. Wuerl's gist was that we would use words, phrases and expressions which everyone understood to mean one thing and simply vacate the commonly understood meaning and stick in something whole and entirely new in its place — for example, the word "mercy." It got a lot of play from lots of clerics in Rome those two Octobers but not without having its original meaning being done great violence to.

Then there was the other dynamic at play where brand new terms were dreamed up out of thin air and made to be so weird and ambiguous that no one really knew exactly what was being intended — other than those clerics who brought confusion into the discussion deliberately. Lots of things got said about Catholicism but with a decidedly un-Catholic vocabulary.

The Church doesn't speak in terms of "faith journeys" and "encounter" and moving from a "maintenance to missionary" posture. That's not Catholic-speak, but it has become all the rage among clerics and their emotional staffs these days. We don't talk about saving souls, which is pretty Catholic vocabulary. Instead, we talk about having an encounter on the periphery, where the person is on his faith journey and showing them mercy so they might have a "God experience." Seriously. Do these people know how completely silly they sound? It all sounds so juvenile and immature.

And this business of moving from maintenance to missionary — what does that even mean? But just like in the realm of education, some person comes up with an idea to improve the status quo. They wrote books and articles and do interviews and keep injecting odd ball expressions into the lexicon until people pick it up. Before you know it, everyone is trying to sound new and sophisticated, so avant garde, and is speaking in just as crazy a language. The problem is most people have no idea what you're actually talking about, and it can be interpreted a lot of different ways — and is.

What is a maintenance parish, anyway? Is that the new cool, psycho-theo-babble expression for old and tired, where no one does anything? If there is a parish where Catholics are not involved and don't care about saving souls, then something is wrong with the parish and probably the diocese as well. In the latest language event of the U.S. hierarchy, it's all about moving a parish from being a maintenance parish to a missionary parish. Except the powers that be and all the sociological Catholic experts have missed the most important thing: proper formation, authentic, genuine, pedagogical, faithful, catechetical instruction.

The bishops and their staffs are so excited about getting people excited that they have forgotten once the emotions and novelty all wear off, there needs to be substance. In this distinctly non-Catholic vocabulary, meant to appeal to the world, the supposition is that if someone is just exposed to others who are jazzed for Jesus, they will cast aside their sin and join in the arm-waving. That's not how conversion works, and a point that needs to be made: It's not entirely clear from this non-Catholic vocabulary that conversion to the Faith is actually the mission.

And that's the problem. What exactly is the mission? You can't figure it out from the vocabulary. Presuming — and that's a mighty big presumption, because priests like Vatican spokesman Fr. Thomas Rosica go around telling seminarians that the goal of evangelization is not to have people convert — presuming it is conversion, what are you going to say? Look how excited I am here with my Jesus! Why don't you try it out?

Good luck with that. More than any other time in human history, mankind is flooded with distractions from the Divine. Awash in sin and its short-lived pleasures, there's not even a desire on the part of many to pick their heads up from their porn, throw their live-in tramp out of the bedroom, stop hoarding money and endlessly entertaining themselves. Their approach is if the God-thing turns you on, good for you. But I'm all cool with the sex thing, or the drug thing, or the whatever thing. This is why just running around being evangelizers is not enough. You need to know the Faith, understand it, be steeped in it.

The consolations of Christ and His Cross are not always immediate or even felt. You are not going to make any headway telling someone immersed in the hookup culture that you have a better way to make them happy; all they have to do is give up sex. Not. Gonna'. Happen.

You need to be able to explain to them, to teach them, in clear terms how their lives are going to proceed and how they are going to end. And for most people drowning in sin, the only emotion that should elicit is fear. You need to talk about a lot of things they have never heard or even considered at any point in their lives, which means the person doing the talking better know an awful lot other than the third verse of "One Bread, One Body."

The whole problem with using non-Catholic vocabulary is it isn't capable of carrying the Catholic water. It's a load of empty words with no power to save. The Church developed its vocabulary over 2,000 years with the aid of the Holy Spirit and the practice of great saints. To cast all that aside — in exchange for a language event about an encounter on the periphery so someone you just met strolling along on their faith journey who is a slave to sin can have a God experience — is naïve in the least.

The main problem, the crux of it all, is the new false vocabulary so many Churchmen are adopting these days is that it completely avoids the truth of sin and the hard teachings. The Church of Nice is all down with being nice; it's just that martyrdom thing, not so much. 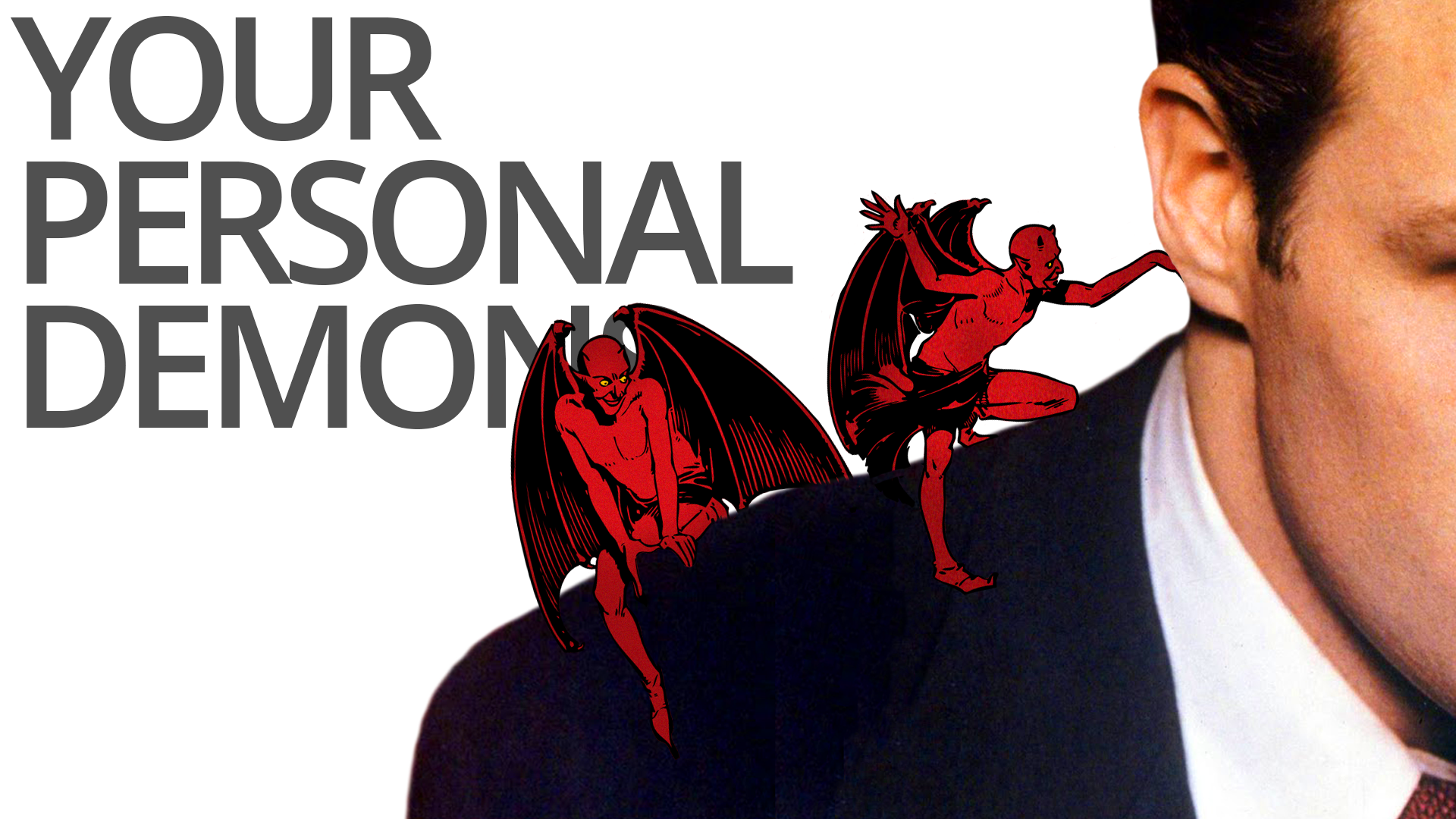 Your Personal Demons
They can be defeated.