Extremely out of balance.

May 13, 2020  0
Podcast Available for Premium Subscribers

You've heard it by now a thousand times: We have to balance medical concerns over the Wuhan pandemic against the concerns about how far we can go in maintaining a nearly completely dead economy.

But there is something suspicious — let's just say it — about all the talking heads on the Left and their non-stop, wall-to-wall coverage of death and mayhem and COVID this and COVID that — as if the Wuhan virus is the only thing in the world. It's bad of course, but it's not the only bad.

Actually, it's not at all. The response of too many bishops has been cowardly in the face of all this, not to mention opportunistic when it comes to a variety of issues whenever they reopen the churches. The approach of too many Marxists in the government likewise has simply been too opportunistic, literally trying to "cash in" on funding proposals meant to help save main street businesses.

The media heads that are all of a sudden so concerned about human life are beyond hypocritical and likewise are being opportunistic, gauging their reporting ever so closely — always considering just how far they can keep pushing the doom-and-gloom scenario.

An anxiety clash has been set up by various bishops around the nation with their tyrannical assertion that Holy Communion cannot be administered on the tongue — essentially thumbing their noses at the universal law of the Church.

On the one hand, they have to keep pushing it for a while, lest the economy begin to show signs of a comeback sufficiently to cause most Americans to think Trump will turn it around economically and he wins re-election. On the other hand, somewhere out there is a line that if crossed, no one will be able to bring us back from. In short, keep pushing sufficiently to ruin Trump, without pushing so much so as to ruin a Biden presidency's chance to solve the problem.

How far should they go? When should the wall-to-wall coverage of daily death counts, hospitalizations and interviews about testing and tracking start to give way to a single ray of other news? It has to be a tough balancing act for a Marxist gang looking to exploit any possible advantage without crossing that line, because in short, no one really knows where that line is. The daily presidential tracking polls and job approvals have next to no consistency. The country keeps waffling between keeping the stay at home orders in place and going back to work.

Recent mental health professionals armed with their own models say if we're much longer at this rate a new category of Wuhan deaths is going to have to be invented — COVID suicides, with some early projections being that the economic fallout will cause 175,000 Americans to kill themselves. So, how do you balance between death from catching COVID and deaths from having no more cash? It's a serious question.

But since that angle might slow the march of the Marxist media because it suggests reopening might be the better way to go, thereby buoying the economy, thereby benefiting President Trump, the Marxist, Luciferian media has gone down that road.

And while it may not be a matter of life and death, physically anyway, an anxiety clash has been set up by various bishops around the nation with their tyrannical assertion that Holy Communion cannot be administered on the tongue — essentially thumbing their noses at the universal law of the Church, which says you always have a right to receive on the tongue. Note the word "always."

And also note, the application is "universal," which means no local bishop has the authority to override it, even right down to the preposterous tweet over the weekend put out by Knoxville bishop Richard Stika where he said any Catholic insisting on Communion on the tongue would get tossed out of the church and not allowed back in. There's a model of charity.

He said personal piety needs to take a backseat, even though his own bishops' conference said people should be able to receive on the tongue as well as medical evidence saying one method, hands or tongue, is no more dangerous than the other.

Everyone can hold high their individual hosts in plastic bags, which are then consecrated, and later opened and consumed when they self-administer and receive Holy Communion.

And with regard to the question of the Real Presence — a foundational dogma of the Church that 70% of Catholics don't believe anyway — here's a question: How is it possible that 7 out of every 10 American Catholics don't believe in the Real Presence if all the bishops and priests do? That's a massive disconnect. That is, if it's true, which strong evidence would suggest it's not:

There's simply no way that every last one of these men actually believes in the Real Presence — not the way they treat it. So we have a suggestion — a solution, really — that many of these men will probably enjoy. Here it is: The Church is taking "social distancing" seriously, even to the point of suggesting distributing Holy Communion in paper cups to passengers in cars.

But all current methods of distributing Communion require some degree of violating "social distancing" with ineffective attempts to "mitigate." You have to come closer than six feet to someone no matter how hard you try. So bishops can order their clergy to mail unconsecrated hosts to Catholics before Mass. They, of course, must be in sanitized plastic bags and have been placed in the bags by those wearing gloves.

Then, at the consecration on the weekly livestream, or when we're all back, everyone can hold high their individual hosts in plastic bags, which are then consecrated, and later opened and consumed when they self-administer and receive Holy Communion. No one has to ever touch the Host but the person himself. In fact, such a scene would be visually stunning — like a prayer meeting of one-arm amputees.

With the Communion wars thus settled, surely we can be equally imaginative with ways to hold virtual hands during the Our Father, or introduce a rite of the placing-on of the holy latex glove. The girl altar boys can distribute them with a pole to everyone with a facemask so we can exchange greetings at the sign of peace. "Novus" Ordo indeed!

This insanity has got to come to an end. It's completely out of balance. Throwing people out of church — seriously? 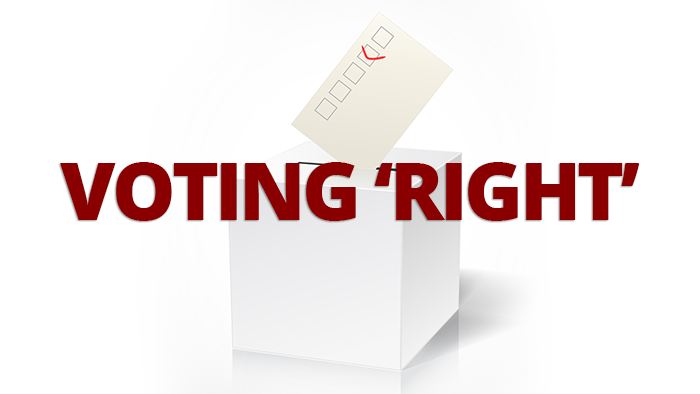 Voting ‘Right’
In more ways than one.