As you certainly know by now, after months of planning and organizing our "Bishops: Enough Is Enough" prayer rally and protest scheduled for Baltimore this coming November (to coincide with the bishops' annual meeting), the city of Baltimore, namely, the city solicitor James Shea, abruptly canceled the event.

His out-of-the-blue decision, however, may not have been as out of the blue as it first appeared. Subsequent to my initial phone call with him asking why he canceled the perfectly legal contract, Church Militant has learned that the highly active Democrat has some long, deep relationships with the U.S. bishops.

Without knowing those details when I was speaking with him, I had nevertheless asked him, "Did you get a call or communication from anyone at the USCCB asking you to cancel it?" His response was, "I can neither confirm nor deny that."

Shea maintained to me throughout that phone call that the reason he decided to cancel the contract was that he had received reports that Church Militant was tied to the Jan. 6 events at the Capitol and posed a threat of violence. That, as they say, is a load of bull, and Shea knows it, which is why he couldn't provide me with a single report, claim or document showing that claim to be true.

He just kept saying that the reports are widely available on the internet. First, no they are not. We looked through, scoured actually, the internet, looking for anything claiming we had anything to do with Jan. 6. Nothing turned up. Shea either blatantly lied about that or was lied to by some other actor or actors and just accepted their word.

What Shea, acting as an agent of the city as well as personally, has done here is engage in what's called "viewpoint discrimination," meaning he or the bishops or both just don't like our viewpoint so he made up a bunch of garbage to cancel our event.

But it's really about the content, just like it always is when someone says something about Church Militant. They pretend it's the tone, and in this case, some idiocy that we are going to firebomb the Baltimore harbor and attack the bishops' conference, but it's really about the content of what would be said from the stage. And everybody knows it.

What Shea, acting as an agent of the city as well as personally, has done here is engage in what's called 'viewpoint discrimination.'

So, first step, we have sent the following demand letter to Shea and given him until noon this Friday to comply and reverse his original order to cancel, which, again, is based on a pack of lies. If he does not reverse and restore the rally that was based on a perfectly legal contract and which we broke no provisions of, then, as they say, we'll see you in court — as well as be diligently pursuing the whole "bishop angle" to all of this.

We said we'd keep you updated, so here is the letter:

We are formally demanding that the prayer rally originally scheduled to take place at the MECU Pavilion on Nov. 16, 2021 by St. Michael's Media/Church Militant be reinstated. We require a response within five business days.

After the MECU Pavilion agreed to allow us to host our event, relying on that legal and binding contractual agreement, St. Michael's Media promoted the event publicly and secured 16 nationally known speakers to appear at the rally. Relying on that agreement, we received more than 2,000 reservations, with the expectation the event would reach full capacity. Many attendees purchased plane tickets and made hotel arrangements. Our staff also spent many hours organizing and planning.

The MECU Pavilion was specifically chosen because of its proximity to the Baltimore Waterfront Marriott Hotel, where the U.S. bishops hold their annual meeting. Our prayer rally was meant to be a visible protest of the bishops' corruption, sex abuse cover-up and financial malfeasance. In addition to talks, we had planned on praying the Rosary. Thus the event was both in the public interest and also had an overriding religious dimension.

Holding the event elsewhere would be moot and would eliminate the very purpose of the rally, which is meant to be a visible protest directly in view of the bishops.

We held the exact same rally in the same location during the U.S. bishops' meeting in 2018. The rally was peaceful, and there were no complaints from MECU management or from the city. We therefore have a demonstrated track record of peaceful and orderly presence in Baltimore.

On Aug. 5, 2021, you abruptly canceled our rally. We were never advised of any contract provision we had violated. Neither did you substantiate the outrageous, slanderous allegation that St. Michael's Media was linked to the Jan. 6 Capitol protest — a claim we vehemently deny.

We are also highly suspicious of your personal close associations with the U.S. hierarchy, coupled with the reality that the U.S. bishops, who were the ones being prayed for and protested against by 3,000 Catholic U.S. citizens, are the only substantive beneficiaries of your actions.

We pose no threat to anyone's health or safety — and you know that. Your friendly ties to the U.S. Conference of Catholic Bishops have the appearance of collusion with the only entity that stands to benefit from our cancellation — even under false pretenses.

Furthermore, the reasons offered to cancel our event were a pretext and utterly without basis, resulting in violation of our First Amendment rights to freedom of speech, assembly and free exercise of religion.

We also believe you are in breach of contract for canceling the agreement based on this pretext, after we had relied on the agreement to our detriment.

The right to peaceably assemble and protest is a cornerstone of our constitutional government.

Likewise, the quickly evaporating case, as admitted this past week by the government against those who actually were present in D.C. on Jan. 6, further weakens your claims.

Even so, the government is not allowed to weaponize security concerns to trample on citizens' First Amendment rights. You are engaging in a heckler's veto, which is unconstitutional.

If you stand by your original, baseless decision, or fail to reply, we will initiate legal proceedings against you personally, as well as the city of Baltimore, in whose name you spuriously acted to deny us our First Amendment rights.

We will not sit idly by while the city tramples on our rights because you do not agree with our viewpoint and have fabricated salacious stories about us to justify your abuse of authority.

While this is still a free country, no thanks to the political party (Democrat) you personally are so wedded to, as well as a corrupt hierarchy wildly supportive of your political party, we will fight this with every means available.

We are submitting this demand letter that the city reverse its decision and reinstate our Nov. 16 rally. Your deadline to respond is 12 p.m. ET, Friday, Sept. 3, 2021.

We will let you know what, if any, his response is and then what happens after that. Stay tuned, and please keep all this in your prayers. 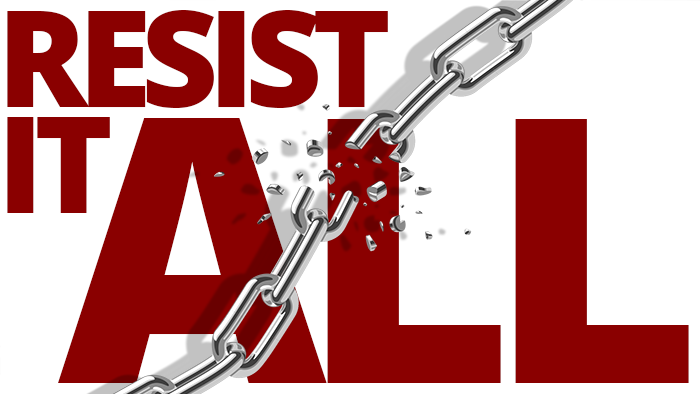 Resist It All
Do something.