It's clear from what's going on behind the scenes that the Catholic establishment class is getting nervous: In fact, they're downright scared, and more specifically, they now view themselves as on the defensive. That was the motivation for an invite-only meeting organized by Bp. Robert Barron a week ago — to discuss, specifically, the rise of authentic Catholicism on social media and the internet.

On the call were:

This is the crowd that Barron surrounded himself with to talk about the threat from faithful Catholics completely fed up with business as usual in the Church of Nice.

Demonstrating a woeful ignorance — not even really understanding the actual issue — Barron pegged his private chitchat as a discussion about "radical traditionalists" online. He went on to foster a discussion about how so-called rad trads "ruthlessly criticize the pope and bishops and question the authority of the Second Vatican Council, often to the point of repudiation."

Barron utterly fails to understand the necessary distinction between the orthodox (meaning faithful, practicing Catholics) and the radical fringe (like the breakaway SSPX cult). The distinction is meaningful. Faithful Catholics do not question or repudiate the authority of the Second Vatican Council.

However, we certainly do question its implementation by a group of homosexual bishops who wanted to wreck the Church (which they pulled off in spectacular manner). Likewise, regarding his concern about criticizing the pope and the bishops, a distinction needs to be made: Criticizing about what, over what issues? There is more than an air of clericalism and superiority in Barron's poorly thought out condemnation.

We, of course, can't speak for other online Catholic apostolates, but Church Militant has never questioned the authority or the legitimacy of Pope Francis or his election. We are on record as saying that it is not the place of the laity.

But we are most certainly on record saying that he should resign his office for protecting and promoting homosexuals and abusers within the hierarchy — a policy that has become routine. In so doing, Francis has broken trust with the laity, promising to rid the Church of this scourge, yet quietly and rapidly advancing it.

Likewise, to suggest that bishops are somehow beyond criticism is preposterous. His characterization of well-deserved criticism as "ruthless" is just flat-out stupid. For example, is it "ruthless" to report on Cdl. Dolan for his promotion of active homosexuals promoting gay marriage being allowed into the St. Patrick's Day Parade?

To suggest that bishops are somehow beyond criticism is preposterous.

Is it, likewise, "ruthless" to have exposed the over-the-top corruption of the lying, cheating former bishop of Buffalo, Richard Malone (who protected homosexual predators), and to have been instrumental in his forced resignation? How about the Marxist social-justice network within the bowels of the Church that promotes all manner of evil and dissent from Church teaching with the blessing of multiple bishops? Is it "ruthless" to expose Cdl. Blase Cupich's support for active homosexuals receiving sacrilegious Holy Communion?

These things — which are grave sins — are outrageous, and they cry to heaven for vengeance (a vengeance Almighty God will extract one way or another). But to describe revelations of these very public sins as "ruthless" is immature and childish on Barron's part. Barron has had his knickers in a bunch over Church Militant ever since we went after his grave error of suggesting that "we have a reasonable hope that all men are saved."

His entire Church of Nice structure is built on that ridiculous foundation — on an over-emphasis on God's mercy to the utter rejection of divine justice. As long as Barron gets to sit back and paint himself as the reasonable middle, he gets to skate. We called his bluff.

Judas is in Hell, not because Church Militant says so, but because the Son of God did. And if Barron admits Judas' fate, his whole facade comes crashing down, a facade he has constructed his entire persona behind.

But more than this, Barron has become the poster boy for the entire Church of Nice apparatus, always presented as the middle-of-the-road guy, not too much to one extreme or the other. That portrayal is asinine. With Our Lord, there is no spectrum, with extremes on either end and a "reasonable middle" where the truth is. There is simply Christ — in totality or not.

Barron and his clericalist crowd like to have you think of him as the modern-day apparition of Abp. Fulton Sheen, which he is decidedly not even close to. Whatever gifts Barron may possess, he has turned them to the world of his own self-promotion. He couldn't even summon the courage when talking to Ben Shapiro — who asked him an honest question about the necessity of Christ — to answer truthfully.

Barron whiffed and could only muster up a weak response that "Christ is the privileged way." Wrong, bishop. Wrong. And no, it's not "ruthless" for me (or others) to call out your horrendous error. But your sensitive emotional lot think any criticism of your errors is ruthless and mean and so forth.

For decades, the episcopate and the priesthood have been littered with emasculated men who simply cannot stand up and declare the truth plain and simple. Curiously, when Shapiro asked a Protestant minister the same question on his show, the protestant gave him the straight-up Catholic answer. No, you cannot be saved by any other name under heaven.

Jesus is not privileged; He is necessary. It's hard to tell if Barron and the rest of the bishops are just genuinely malformed on these questions and actually believe the sputum that drools out of their mouths or if they somehow know the truth and are just too chicken to say it. But they sure do get all prickly about it when you call them out on it. For the record, Bp. Barron, you and your pals and sycophant fanboys need to get a grip.

You aren't beyond criticism, but the problem is you clutch your pearls and whine at any criticism and classify it as "mean" and so forth. Interesting in this whole "private chat" controversy is that he also identified the others on the call as professional media. In what way have they demonstrated any degree of professionalism as media?

They made a career out of covering up and ignoring boatloads of scandals to protect their careers — scandals involving the hierarchy and that have produced tens of millions of victims of all sorts of abuse. Misreporting or not reporting on purpose is a huge breach of journalistic ethics (not to mention wildly unprofessional).

And here is the $64,000 question you chose to remain silent about: Why do you think Church Militant and others have gained such traction? Simple — we were (and remain) accurate in everything we report. We were the only outfit continually reporting on the invasion of homosexuals into the seminaries and hierarchy.

Barron and the bishops used to make fun of us and sneer behind our backs and tell others to do the same. But then, McCarrick happened. And there it was for the whole world to see: Church Militant was vindicated, as the evil that dominates so much of the hierarchy came tumbling out of their gay closet. They hate that we exposed that as well as layers of other corruption (spiritual, financial and the list goes on) and betrayal of the faithful.

So, now it's the case their sins are becoming known — largely because of our groundbreaking coverage — and they are clearly concerned about the fallout. They should be. The level of trust in the bishops as a body is practically nonexistent. But the private phone call with his pals just goes to show the wrongheadedness of the establishment.

They support gay cheerleader James Martin. Have they ever had a private call about how to silence him?

Do they really want to pretend there are not crippling problems within the Church, that multiple bishops should not resign for these evils, that the faithful have not been dragged over the coals? Do they really deny all this? Apparently, because we never hear reports about secret phone calls to discuss how to address those evils.

Only this stupid phone call to address how to kill the messenger. They support gay cheerleader James Martin, as just one example. Have they ever had a private call about how to silence him? How about the never-to-be-released McCarrick report? Any calls on that? You get the point.

The hierarchy as a whole is corrupt, and the bishops and the professional Catholic parasites who make their living off them need to keep all this from you. So they go after the ones informing you. The jig is up. There is no putting the toothpaste back in the tube.

The hierarchy has no intention of cleaning up, but we already knew that. This little call — which was revealed in the National Catholic Reporter, a rag of liberal dissent that many bishops play footsie with and that was forbidden from using the name Catholic — was intended to get the ball rolling on some kind of censorship.

Good luck with that. You people are contemptible. You are part of the ecclesiastical swamp and cannot stand that you are being exposed. You have no desire to admit, confess or repent of the sinful status quo you have established within the Church. We're sorry you have arrived at that point, but don't think we are simply going to roll over.

You can take your modernism-infected theology as well as the establishment that supports it and take a long walk off a short pier. You have denied enough souls the truth, and rambling on about your hurt feelings and mischaracterizations of what we report will not stop us — not for one minute. The bottom line is simple: You have spent decades building a false theology that has cost millions of souls.

Your willful silence and refusal to proclaim the truth has resulted in untold hundreds of millions of sacrilegious Holy Communions as well as a torrent of blasphemies, and yet your urgent concern is what faithful Catholics online say about your evil. Your facade must be destroyed and the authentic Faith restored. You're all finally on the run, and considering the damage you've caused, you should be. 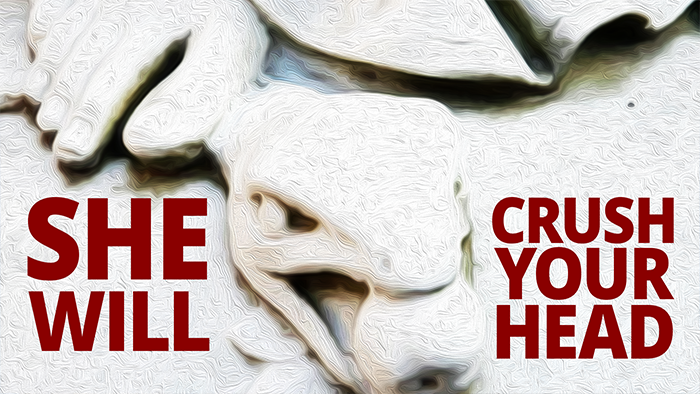 She Will Crush Your Head
We need to join ourselves to that victory.