How will the battle turn out?

Rome was not, as the saying goes, built in a day. But more importantly, neither did it collapse in a day. True, there was one day — a final day — of the empire. You got up on that last day, and it was still there. And when you went to bed and got up the next day, it wasn't.

But that was the end of a very long process. The collapse was centuries in the making. It just accelerated near the end of the process. So Rome didn't go out in a blaze of glory, but more like a dying ember, or a small whimper.

Its fate was sealed long before, and it just took a while to unfold on its way to its inevitable demise. We see the same thing in the West these days, playing out right before our eyes. Or at least it would seem so.

No one on earth knows for certain, but we must fight with everything we have and hope to beat back or, more specifically, cast out the barbarians. This time around, the barbarians are Marxists — proponents of a godless system that denies the sacredness of human dignity in all forms. And don't believe for one moment the wailing and gnashing of teeth you hear from these Marxists about various lives being important: It's called propaganda, period.

These same Marxists who claim to care so much for the poor and downtrodden (be they black, Hispanic, native tribes — whatever) are the same Marxists who've been in charge for decades. If they cared so much, why didn't they do something about it any of these past 50 years? If they claim they've been trying, then judge them as incompetent!

But the truth is, they haven't been trying, just as the Catholic hierarchy has not really been trying to evangelize. Marxists don't care about the poor (other than ensuring everyone is poor — except the leaders themselves, of course). And too many bishops don't care about souls, including their own.

And just like the barbarians who kept relentlessly pounding away at Rome, today's barbarians, the Marxists, who do not speak the language of civilization, are marauding through the streets.

The original meaning of the word "barbarian" referred to tribes who were not part of the great civilizations of antiquity, i.e., Rome or Greece. Specifically, it also meant they didn't speak Greek, the common language of the empire. Its common usage was the reason the New Testament was written in Greek.

Language forms bonds. A common tongue helps advance ideas and culture and so forth. It propels and helps fashion and shape a worldview, gives it expression, which then brings forth a civilization.

The barbarians did not speak that language. The various tribes, in fact, each spoke their own — had their own idea of what the world should look like. And while they might not have necessarily agreed on their own views, they did hold one thing in common: Rome had to fall.

Sixteen-hundred years later, here we are again. Except, this time, we are the ones who find ourselves in the battle. It may be history repeating itself, but that history is now our present.

Consider the young men and women of ancient Rome who went to sleep that last night and got up the next morning. Consider — they had grown up, been nurtured on the glory of Rome, a thousand years of civilization (roughly 500 as a republic and then 500 as an empire). They would have learned the imperial songs and would have been taught in the imperial schools about the glories of conquests of the legions and the light of the caesars and so forth.

Then they got up that first morning post-empire, and those previous thousand years were just a mist that no longer held any significance. In fact, the date was Sept. 4, A.D. 476. That's when the barbarian Odoacer deposed Rome's last emperor, Romulus Augustulus. So much for the glory of Rome.

While the empire did continue in the East, it was no longer centered in Rome, and its name was even changed (fittingly) to "Byzantium." How this all came about, how the most powerful empire in the world began crumbling, is the topic of intense study and research among historians.

Betrayed by our own leaders, lied to and deceived for decades, it is now incumbent on Catholics — what few remain — to throw ourselves into the pitch of battle.

But one of the agreed-upon causes is the tremendous role the barbarians played, because Rome was so weakened from within, owing to economic and moral weakness. Barbarians had been attempting to breach the walls for centuries and had failed. In fact, it was assorted barbarian tribes themselves that the caesars had vanquished as they expanded the borders centuries earlier.

And just like the barbarians who kept relentlessly pounding away, today's barbarians, the Marxists, who do not speak the language of civilization, are likewise marauding through the streets (in some towns, literally). As Catholics, we are at a crossroads. Betrayed by our own leaders, lied to and deceived for decades, it is now incumbent upon us — what few remain — to throw ourselves into the pitch of battle.

Whatever the temporary, temporal outcome should not concern us. God only asks that we fight. The battle is ours, but the war belongs to Him. We will be discussing all of this — duty, honor and valor at this year's "Strength and Honor Conference" for men, here in Detroit on Aug. 7–8. That's a Friday and Saturday.

We also have a special event for wives who attend, should they like to make the trip. But the conference itself is for men: dads, sons, buddies. We have special guests, Tim and David Gordon — the Gordon brothers — giving presentations, as well as our own Simon Rafe. And I might have a word or two to offer.

All the details are available by just clicking on the provided link, and please do strongly consider attending this year's conference. Past ones have been very well-attended and have greatly benefited participants in many ways, including by establishing a camaraderie with each other. That's extremely important in battle. We can't fight it alone.

It's good to rally the troops, in particular when the stakes are so high — and they are very high. We have two very important issues to talk about:

Since both are possibilities, they both need to be addressed. Remember, ultimately it's all spiritual combat, just playing out in time and space. That is what we face. Now let's face it and get down to business.

Thank you in advance, and we look forward to seeing as many of you as can attend. 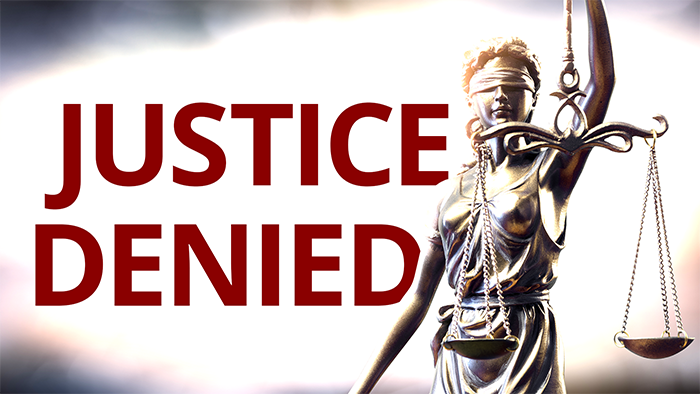 Justice Denied
But not forever.