Fighting for the Future.

We have to admit that quite frequently here in our day-to-day work, it feels like we're battling Goliath.

The reason it feels that way is because it is that way. Of course, that turned out okay in the end — but only in the end.

There seems to be a certain laxity setting in on the pro-life side of things right now, perhaps even naiveté.

Roe's demise was, of course, massively monumental, and we never want to diminish it. But after 50 years of battle, there seems to be a little complacency taking root now that it's gone.

Roe was not, never, a thing in itself. It was a necessary obstacle that needed to be overcome.

But the real enemy, the philosophy that undergirded Roe, is still very much alive and kicking.

Look at this video from just this past Sunday: There she is, queen of devout Catholics herself, announcing that the forces of darkness are back up off the mat and throwing punches.

Nancy Pelosi passed the first bills since Roe's death to restore abortion as a so-called right across the nation.

It's dead on arrival in the Senate and so will not become law — for now, anyway. But that's only because of one man: Sen. Joe Manchin of West Virginia.

The Dems are one single Senate vote away from wiping out all that was gained by the Supreme Court overturning Roe v. Wade — one vote.

But abortion is only one issue for the globalist Communist Democrats. And when we say we are battling Goliath, you need to really understand just how much the deck is stacked against us.

There is not a single cultural institution that has not been overrun by the Communists. They took over the Democratic Party in the past three decades, and because of the power that is gained by grabbing the reins of one of America's two major political parties, they wield enormous influence.

And when you look across the globe, what do you see? A whole bunch of allies for them and virtually none for us.

We all know about George Soros and his "philanthropic" means of advancing godless atheism by funding local elections of district attorneys who will not prosecute the bad guys and will come after the good guys.

The entire, non-stop pounding in the media of man-made climate change — it's all a lie, yet globalist leaders of nation after nation in the West see the benefit of taxing and controlling their citizens under the ruse that the earth is about to blow up unless we act.

The media are in on this because they are all controlled by globalists as well — and yes, that includes Fox News, which ordered all their employees to get vaxxed and would not let any worker into the New York headquarters if they were not.

While there are a lot of insufferable idiots who work in the media, they aren't all dummies. Many of them know this. It's a list of every lie coming from "scientists" and pounced on by the media going back to 1966.

There are so many lies it would take more than one Vortex just to read the lis, but a couple of highlights should be pointed to:

Of course, none of this happened — but that's not the point. The point is that it never stops, and when you pound lies into the minds of people who have been taught not to critically think, this is what you get away with.

Why does any of this matter? Because eventually, sooner or later, you tip the scales sufficiently that you get everything you want — because people vote out of fear. That's why people are still wearing masks.

But there is another dynamic — the most important dynamic, in fact — that you get from supporting Church Militant and getting your information from us: We are the only Catholic media outfit that shows you — in great detail — how all of this secular madness overlaps with the corruption in the Church.

We've been saying this for years now, and with each passing day, more people are understanding this critical point. We can talk about the Dems and the Republicans being what's called a "Uni-Party" — meaning there really isn't any significant difference between them, because they each arise from the same swamp.

But that analysis misses the most important point. When it comes to globalism, which is the aim of the Uni-Party, that Uni-Party has the most powerful ally it can have on the face of the earth in the corrupt Catholic hierarchy.

The deal is not the Uni-Party. It's the super, multi-national alliance of corrupt prelates joined with the Uni-Party forming a Goliath of evil.

No institution on the planet has the resources that the Church has. George Soros and company (meaning Bill Gates and all of them) look like paupers compared to the Church's wealth. And when that wealth and power fall into the hands of evil men, watch out. Catholics all over the West are only beginning to recognize just how corrupt things are, and that recognition, it's true, may be a day late and a dollar short.

Tradition is in the crosshairs of the globalist prelates: Communists. And no, we aren't just talking about the Latin Mass. That is actually a very small battle on this enormous field of war. The destruction of doctrine, morals, formation, finances, devotional life — every last aspect of the Church is what's been playing out now for decades.

We could just as easily put together a list of lies handed out by crooked bishops and cardinals going back to the 60s, like the list about climate change lies told by the media.

You must understand your enemy, who is, of course, Satan — but you must also understand his tactics.

Church Militant does and is the only one that has been delivering all this information to you for years now, information about the corruption of homosexuality in the priestly ranks, the theft of billions in Church patrimony, the collusion between the hierarchy and the D.C. swamp. We even coined the term the "Deep Church," just as we coined the term the "Church of Nice."

All of this is to say this: It is vital that the work of Church Militant continue to thrive and expand, which is why we announced our six-month million-dollar fundraising drive to ensure our longevity.

We're calling it "Fighting for the Future."

As we have grown, our costs have mounted terribly. Success does have its downsides, especially in an environment where truth is now deemed an enemy of the State, the people and even many quarters of the Church.

The staggering amount of information that flows in here needs to be chased down, vetted, organized, produced and presented to faithful Catholics so that you grasp in all earnestness the dire straits we are in as a Church — and consequently as a world.

We not only tell you everything going on in both culture and Church, we do something no one else does: We show you how they are all interconnected, and we've been doing it for years.

As just one small case, using the example of climate change, when no one in the Catholic world — and we mean no one — was connecting the dots between the Church and the climate change freaks, we were.

More than a dozen years ago, we presented our Faith-Based Investigation entitled "Global Warming Unmasked." It goes into deep detail about everything we are seeing play out today in the Church and the world.

The same year, after extensively connecting the dots, we produced another FBI we called "Obama's Counterfeit Catholics," showing how multiple Church organs were being funded by globalist interests to use the Church to get Obama elected. More than a dozen years ago!

Church Militant has been in this game longer than anyone else in the Catholic world, exposing the corruption, connecting the dots between Deep Church and globalists. And now more than ever, this work must continue well into the future.

But we can't do any of that without your help. We know a million dollars is a lot, but consider how much money crooked politicians raise, or crooked homosexual bishops and their cover-up chanceries.

This very moment, in archdioceses across the country, more than $2 billion is being siphoned away from unsuspecting Catholic sheep in their bishops' "annual appeals" — Madison-Avenue marketing schemes to get as much money as possible to pay off lawyers and homosexual sex abuse settlements.

We're asking you to turn away from those charlatans and give your money to us here at Church Militant.

If you love what we do here — and much of it is delivered to you at no cost — then please step forward and make what is certain to be a sacrifice in these hard days.

Remember, when you're considering an amount, these hard days have been brought to you by the very man in the White House whom the globalist bishops help put there. It's time to send a loud message — and the only message that crooked lot understands is money.

So please, click on the provided link and ensure the prolonged existence of Church Militant as the dependable, trustworthy information source we have become for you.

Thank you in advance for your generosity and support, both spiritual and financial. You have our word that we will never give up fighting for the future. 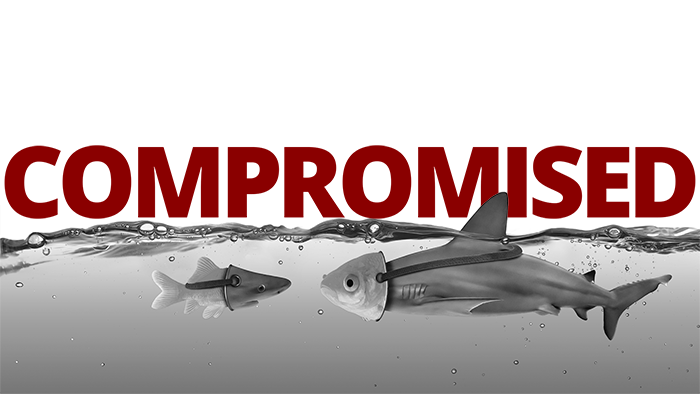 Compromised
Right to Life groups have been coopted.