In a thousand different ways.

With only a very few, very rare exceptions, one word describes what the U.S. bishops' approach to the laity has been for the past half-century: betrayal. And it has manifested in a thousand different ways. And the sorry reality is there appears to be no end in sight to their betrayal.

We all sadly know the betrayal on the level of the liturgy, the devotional life, the education system, the malforming of so many seminarians, the influx of homosexuals into the priesthood and episcopate. All of that is well documented — and for the record, none of them seem to care about it in the slightest.  Even the ones you would think care are practically stone cold silent on it all.

For example, last week Church Militant broke the story that Newark Cdl. Joseph Tobin is spending archdiocesan money from the collection basket to pay this man, Sean Ryan, to be senior associate for operations, which supposedly is a position that makes the archdiocese function better as a business.

Maybe if the archdiocese is more concerned with business than salvation of souls, the move might make sense.  Oh wait — that is the case.

Tobin is one of the most homosexualist bishops in the United States, part of the reason he owes his meteoric rise in the episcopate to homopredator Theodore McCarrick and homopredator cover-up artist, the lying Donald Wuerl. Tobin, you will remember, housed Italian model Francesco Castiglione, a gay actor, according to various Italian sources, in his rectory under the explanation that Francesco was taking English classes at Seton Hall and had nowhere to live, unlike the other thousands of students who managed to secure housing. Suuuure!

This little gay network is revolting. No Catholic should put a dime in the collection plate of any parish in that twisted cardinal's archdiocese. Financially starve the twisted, perverted clerics out of their homosexual lives.

But, of course, Tobin isn't alone in his betrayal.

In the wake of the South Carolina priest's refusal of Holy Communion to fake Catholic, pro-child-killing Joe Biden, Cdl. Timothy Dolan of New York struggled and twisted himself in knots trying to not support the action by Fr. Morey.

Dolan ducked and weaved — as he has multiple times in the past on this violation of Canon Law — presenting it as not a violation of canon law.

Then there is the case of Bp. Robert Barron's betrayal of the faith by completely sidestepping the question of the necessity of Christ for salvation when asked point blank by Ben Shapiro on his program.

Barron dumbed the whole issue down and said Christ was the "preferred" way, implying of course, as any reasonable person would take it, that there are various ways to salvation.

And again, his Halloween opening prayer in front of Congress last week when he deftly avoided any mention of Our Lord's name — as well as not making the sign of the cross, before or after — the politically correct "blessing" was in perfect keeping with his "never give offense" self-promotion campaign.

And this is the root of the half-century of betrayal. These men are afraid of men more than they are of God. And that means whatever measure of supernatural faith they may have once had has either evaporated, or nearly so.

Imagine for just a moment that Peter and the Apostles had approached preaching and witnessing to Christ like this sorry lot does. We wouldn't be here today as believing Catholics if they had.

Endorsing sacrilege, refusing to assert the necessity of Christ, hiring out anti-Catholic homosexuals with Catholic donation money, covering up homopredation, stealing hundreds of millions, billions in payout for their crimes — you name it, there isn't one single area of Catholic life, and not one single person who has been baptized, who has not been abused on some level by this wicked, narcissistic crowd of prelates.

Where was the uproar from them about the Pachamama garbage in Rome during the synod? Where has been the long-awaited denuncuation of James Martin's perversion of Scripture and promotion of sodomy? You'll wait until the 12th of never if you're waiting for that because the truth is many of them likely agree with Martin.

Betrayal has been the hallmark of this dastardly crowd of wicked, weak men. Most of all, they have betrayed Christ.

But God is not mocked. Somehow, some way, Our Blessed Lord will rescue His Bride from the filthy hands of these spiritually murderous men, a brood of vipers if there ever was one. They better hope that Barron is right — which he isn't — that we have a reasonable hope that all men are saved — which we don't.

Think of everything the Apostles and countless others down through the centuries have suffered for the Faith, millions of martyrdoms to protect the purity of the Faith, hundreds of millions of self-sacrificial lives. What an insult to the Divine Majesty and justice to consider that on their present course, which we hope and pray they abandon, these men would receive the same reward as those who have gone before them.

Until this generation of wicked prelates has passed, and their progeny waiting in the wings is dealt with, faithful Catholics will have to simply live with the reality that betrayal is the order of the day. We are going to have to bake that into our spirituality — but not in a despairing way.

Our Blessed Lord will bring an end to this. One way or another, it will not be allowed to continue. 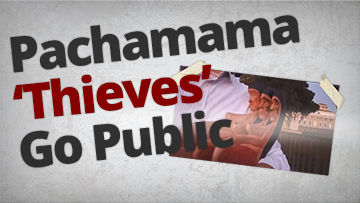 Pachamama ‘Thieves’ Go Public
And there is more to come.