It's as clear as communism.

Now, faithful Catholics are well aware of the betrayal of the One, Holy, Catholic and Apostolic Faith that has been going on for decades. But what is coming more and more into focus is not just the depth of their treason against the Church, but also the country.

Catholic Charities is the travel agent for illegal immigrants.

The word has gone out in conservative circles that the bishops and the Church are as much of a problem as the evil in the Democratic Party.

Everywhere the politically astute travel these days, the narrative is the same; the U.S. bishops are betraying the country.

And the "treason narrative" isn't just limited to the question of immigration. It stretches across a panoply of concerns — but treason is how it is being understood and portrayed because treason is what it is.

Of course, traitorous bishops are not exactly shocking news to authentic Catholics. But here's the larger problem: As the news spreads, it damages the ability of faithful Catholics in political circles to evangelize.

We know that various prelates (and the higher up the food chain you go, the more of a problem it is) simply do not believe. They oppose the gospel. They aren't merely indifferent to it or malformed, but actually oppose it openly. They embrace sodomy, they deny (in their actions) the sanctity of life in the womb, they deliberately distort Church teaching regarding illegal immigration and they turn off the spigot of supernatural grace in the sacraments through their COVID tyranny.

Anyone who betrays divine truth won't think twice about betraying their country. The bishops, as a body, have thrown in with the communists of the Democratic Party.

Hundreds and hundreds of millions of U.S. taxpayer dollars flow through the Catholic bishops' conference to advance illegal immigration.

The major front for this effort is Catholic Charities, described as the travel agent for illegal immigrants.

As Church Militant has reported heavily in the last couple of weeks, leadership in Rome (including the pope himself) has been instrumental in working to promote an environment where fear is the dominant factor — fear of a virus manufactured in a lab of the communist nation funneling billions to the Vatican to look the other way in the face of religious persecution.

The bishops are as much a problem as the Democratic Party.

In many ways, the tide does seem to be turning. But the work is far from over. Get informed and get involved. It's not only how you save your country, it's always been the way to save your soul — faith and good works. 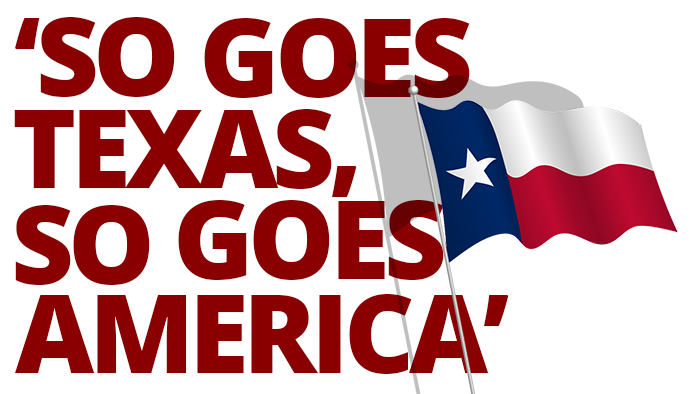 'So Goes Texas, So Goes America'
The tip of the spear.