What are they up to?

The two most powerful men in the world share a common vocabulary. Pope Francis and unelected President Biden talk the same game because they share the same view of the world. When you listen, and it doesn't have to be all that carefully, you hear the striking similarities.

For example, take the word "paradigm." First, what is a paradigm? It's a framework that directs actions. It's your worldview, complete with all its philosophies, from which you direct all your actions.

So, for example, in the Church, the paradigm from which She operates is that Jesus Christ is the incarnate Second Person of the Blessed Trinity Who came to earth to redeem mankind and establish a Church to carry on His work of salvation throughout time. Therefore, all actions of this Church should be directed by this understanding — should be.

Likewise, in the United States, you could say that the paradigm from which the U.S. government is supposed to function, the founding philosophy, is laid out in the Preamble of the Constitution — again, supposed to.

A paradigm shift does not seek to respond to change but actually brings the change about.

However, in Rome and Washington, dark clouds are hovering as talk of "paradigm shifts" ramps up. A paradigm shift is when one paradigm loses its influence and another becomes dominant. The shift is often characterized by those promoting it as "just keeping up with the latest trends of adapting to the current situation." That's wildly deceptive. A paradigm shift does not seek to respond to change but actually brings the change about.

In D.C., for example, Biden specifically said the words "change the paradigm" — shorthand for "paradigm shift" — in his first press conference at the end of March. Likewise, however, in Rome, it's also all about paradigm shifts, as was talked about by Chicago's pro-gay cardinal, Blase Cupich, in a speech he gave to a Catholic so-called think tank at Cambridge back in 2018. He is on record, referring to Pope Francis' theology, with such statements as: "[This] represents an enormous change of approach, a paradigm shift holistically rooted in Scripture, Tradition and human experience."

And while there isn't a word of truth to that (accepting homosexuality, divorce and remarriage and the rest of it as being "rooted in Scripture or Tradition"), the fact that he actually said it points to the reality that a paradigm shift is at least desired, if not actually underway, in Rome. In fact, the war within the Church right now is precisely over the desire of Francis and his allies to initiate a paradigm shift and those who refuse to accept it.

But Cupich was not the first in the Church to bring up a paradigm shift. Cardinal Pietro Parolin, Vatican secretary of state, said himself of Pope Francis' highly charged and controversial document Amoris Laetitia, "It's a paradigm change, and the text itself insists on this; that's what is asked of us — this new spirit, this new approach!"

That phrase, "paradigm shift," is now the dominant talking point of leftists stationed both in the Church and outside the Church. In principle, it's the same war in the United States. The Marxists who have a very slim control over the U.S. government (but, nonetheless, control) are setting about to completely eradicate the previous paradigm from which the United States operated, and institute a brand new one.

Theirs is something much more than just the "big government" that Ronald Reagan fought against. In a theological expression, it could be called "government alone," which is, at its heart, the very definition of communism. The individual has no meaning, no rights, nothing.

That is where America is headed, and it's being spearheaded not just by the actual government but also by "woke" corporations, whose public relations and human resources departments have been overrun by Marxists, courtesy of the educational establishment and its Marxist faculty and administrators.

The two most powerful men on earth share the same worldview, and they are both pulling every lever within their reach to bring it about. In politics and theology, there are no isolated things that happen. They are all and each part of a larger tapestry, a worldview.

So when you hear the unelected president creating a humanitarian crisis at the border and Pope Francis discussing the same type of issue, know that they are each reading from the same sheet of paper — they just speak with slightly different accents.

But they are saying the same thing:

That all of these leaders, so enraptured with justice, actually deny justice on such a large scale to so many — preborn as well as born — tells you all you need to know to understand their agenda. It has nothing to do with justice. It has everything to do with ushering in a new world order by means of a paradigm shift — a new world order where the individual is obliterated and any concept of human dignity conferred on man as a creature made in the image and likeness of God no longer exists. The world is hurtling toward preparation for the Antichrist. It has been since Eden.

Whether the time is ripe for him right now or this is just another step in a long series of steps preparing for him, the mysterious figure whom St. Paul calls "the lawless one" and "the one destined for destruction" is the goal of any new world order.

The previous paradigm from which we have operated was Christ-centered, at least by acknowledgment. The jettisoning of that paradigm, the shifting to a new one, has as its goal the jettisoning of Christ Himself.

This is why those who propose this, under the cover of justice, are actually proving themselves to be destroyers and servants of the demonic. Consciously or not, they have given themselves over to the diabolical — in the Church and the State — and they must be opposed.

This is why they are so intent on hiding themselves — so that they can demonize you and destroy you before you reveal their plans. The paradigm shift, in the final analysis, is all about salvation. Almighty God has allowed this all to come about, and while it was not the case for previous generations, it is for us. How steadfast we are in standing and opposing all this, whether we are "successful" or not, is what will determine our final destiny. 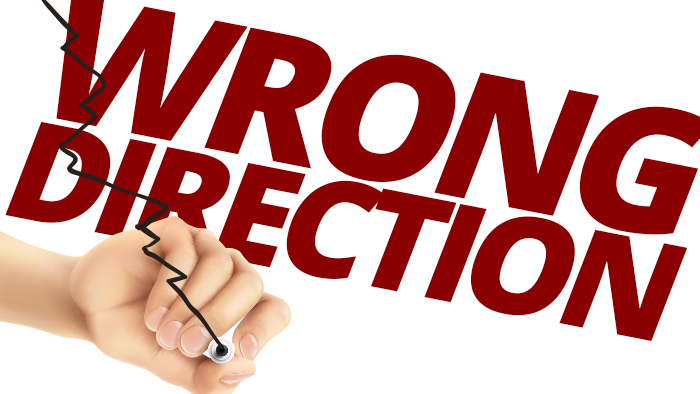 Wrong Direction
Turning it around.