Let's give him a hand.


Church Militant (a 501(c)4 corporation) is responsible for the content of this commentary.

It is now exactly 321 days until the 2022 midterm elections, and while the average American likely isn't thinking about this right now, you should be.

While a week is counted as an eternity in politics, much more 45 weeks (as we stand here today), Biden is crumbling, and the Democrats don't seem to be able to do anything to stop it — or even slow it.

No matter what metric is measured, Biden is being hammered:

Heck, when asked a few days ago what Biden's major foreign policy achievement was in his first year, Jen Psaki was caught totally off guard and couldn't name one. She exited (stage left) pretty fast.

And of course, what's waiting in the wings? Kamala Harris — who scores even lower than Biden.

These power-hungry creeps are in a major bind here.

The likes of Pelosi (and so forth) are so desperate to hold on to their power that they have never really permitted the farming up of their replacements. Unlike the Republican side of the aisle, where there is a veritable stable of young, fresh faces (not only ready to swarm Congress but also destroy establishment Republicanism), the Democrats have no such future contingencies. They're old, worn out and on their way out.

Even their usual voter base is increasingly turning away from them. Blacks and Latinos (especially Latinos) are stampeding away from the Marxist gang. Perhaps that's because it's minorities who have been kept disproportionately poor under 60 years of Democratic policies, and they are finally seeing the light.

Likewise, the nonstop woke idiocy is irritating even a good number of less radical Democrats. Biden sicking the Justice Department on parents who don't want their kids taught they are bad people because they are White or don't want their kids brainwashed into thinking they are the opposite sex — that just doesn't fly.

America has shifted leftward in the past 60 years, but not that left — at least, not yet. This power-crazed crowd has overplayed their hand, but, then again, evil always overplays its hand.

And then there is the COVID tyranny. Masks, Fauci, 19 shots followed by 15 boosters — and then you still catch it and die.

Ah, COVID! Mystical, magical memory for the Marxists, who were able to weaponize the communist germ and steal an election.

Well now, with the Supreme Court (namely Brett Kavanaugh) now stepping in and demanding a response from the White House on its private employer vaccine mandate, things are suddenly looking not so great for even that part of the agenda.

Biden is crumbling, and the Democrats don't seem to be able to do anything to stop it.

Over the weekend even some airlines — most of whom have been like Nazis, insisting the yellow-star mask cover everything except your eyes — even there, a crack in the wall as the CEO of Southwest said publicly, "We have to admit masks don't really do anything."

Well, no duh, but glad to see he (and others) finally get that. Paper masks are about as effective at keeping out a virus as a cyclone fence is at keeping out mosquitoes. The whole mask thing is, and always has been, complete fear theater — nothing else.

All over the country, business owners are up in arms about the supply chain, lack of workers, decreasing profits, you name it. Increasing taxes to pay for Marxist principles being installed — there isn't one area of what Biden could call "success" that he can point to.

His "angry old man" routine in his rambling, incoherent speeches never was popular but is now a laughingstock, with him being likened to a hybrid of the two old man Muppets in the balcony, Statler and Waldorf.

Likewise, when popular sentiment arises from the great, unwashed masses (and big problems are renamed for you), it's pretty clear your days are numbered. That's what the term "Bidenflation" connotes. Ticktock, Joe.

But perhaps the single most significant indicator that the Marxists are on their way to being swept from power in 321 days is that cultural mantra, "Let's go Brandon!" It pops up everywhere — like that speech from phony-Catholic Pelosi in her hometown. Biden has smeared the entire Democratic Party. Good.

But, in reality, what's been accomplished is that the real agenda of the Democrats has been exposed, and people just don't like it. Heck, even Joe Manchin (another not-good Catholic), one of their own, doesn't like it.

It's actually a little hard to determine which is more dead — Biden's agenda or Biden's brain. And now it's time to get real about all this, speaking in terms of spiritual warfare. The Marxist Democrats and their evil agenda are nothing more than instruments of the Devil, and the Devil's main target is followers of Christ (as St. John tells us in the Apocalypse). "Then the dragon became angry with the woman and went off to wage war against the rest of her offspring, those who keep God's commandments and bear witness to Jesus" (Revelation 12:17).

Satan has no other way of "waging war" than through human agents (that he controls because they have given themselves over to him). They are indeed the "offspring of the serpent" spoken of by the Lord God in the garden and by Our Lord Himself to the Pharisees. No one should be surprised by any of this, shocked by it, think it weird.

How else would a person expect evil to seize control, to institute a system of control and enslavement over humanity, other than through politics? Satan can't perform miracles. Even though he is an angel (albeit fallen), his enormous powers are not limitless. He, too, has boundaries and limitations.

And he does nothing without God permitting it. So this giant war going on now (cultural) is permitted by Heaven for a greater good. While we may not understand the specific greater goods in detail, we do know that the greater good is salvation — for those who accept it and take up the Cross.

In the divine majesty, this is evil that God has permitted on the battlefield of our salvation, and therefore we must be engaged with it. On the spiritual side (the faith dimension), we must pray. But likewise, on the material side, we must battle all of this, and since it is politics where this is being fought most ferociously, that is where believers must be.

Every one of the agenda items of the Biden/Pelosi/AOC crowd is aimed at snuffing out Christianity, specifically Catholicism (and notice — each one of them is a Catholic).

Why is that? Why is Catholicism the target? Because Catholicism is the only religion founded directly by Jesus Christ, and continues, under the protection of the Holy Spirit, to teach His truth. And while the leadership of the Church (the hierarchy) is completely off the rails right now, starting with the pope and moving on down, that does nothing to the Deposit of Faith. It doesn't even matter if the bishops (or even the pope) don't believe the Deposit of Faith, or even reject it.

The Church belongs to Our Blessed Lord — not the international gay crime syndicate currently running it.

That doesn't alter the word by the slightest iota.

It ends them up in Hell, as individuals, but the Faith remains pure, untouched, unable to be blemished in even the smallest way. The Church belongs to Our Blessed Lord — not the international gay crime syndicate currently running it. And that's why Satan is using corrupt Catholic bishops and morally degenerate Catholic politicians to destroy Her. Good luck.

In this time and place in human history, it is the political arena where followers of Christ are called to do battle, and it is ferocious out here. But it is precisely because it is ferocious that we are called to stand and fight (and then drive back and defeat) the Devil. Thankfully, his shock troops are led by a brain-dead leader who lost an election and has a penchant for doing nothing right.

And this is why we must be extra careful this approaching campaign — more committed than ever before. The Devil is not going to rest. He doesn't know the future, but he's not an idiot. Somewhere, in the back of his mind, he knows how all this ends.

There is a ticking clock (it echoes throughout all creation), and he knows it. He doesn't know what time the alarm is set for, but he does know there is an alarm.

We, too, don't know. But we do know, whatever time that alarm is set to go off, it is our duty to always fight evil. But we also know that, with each passing day, each minute, the end draws closer.

Make sure that when the alarm does go off, for either us as individuals or creation as a whole (because both will happen) that you have a blood-soaked sword in your hand and the scars of battle all over you.

Enjoy Christmas and, when the new year arrives, commit to fighting the fight of your life. Biden is blowing himself up. Let's give him a hand. 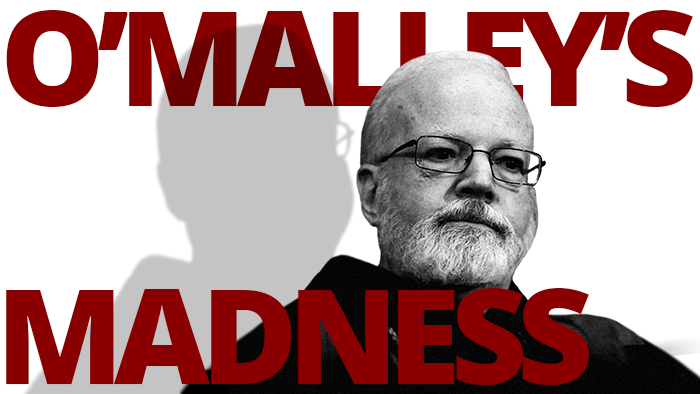 O’Malley’s Madness
Trapped in his own web.