Fallout continues from the U.S. bishops' conference meeting last week as the disaster that is the U.S. hierarchy comes into sharper focus for everyday-Catholic pew-sitters.

The U.S. hierarchy, as a body, is theologically malformed.

That should not be a shock, considering when almost all these men were in seminary; the tumultuous years from the 1970s through 2000 were nothing short of a disaster. The Faith was not being properly transmitted, the Church's devotional and liturgical life was being gutted, extremely questionable men — child molesters and active homosexuals — were flooding into the seminary and working their way up to the episcopate.

Catholic identity was in the process of being lost, and we don't mean just cultural.

Catholic theological identity was vanishing, and today it has almost entirely evaporated, and that is most stunningly clear among the hierarchy. Church Militant spoke to multiple bishops at the conference and asked the pressing questions about sacrilegious Holy Communion and cozying up to the pro-sodomy camp in the Church.

The U.S. hierarchy, as a body, is theologically malformed.

Especially in response to the sodomy question, the common answer we kept hearing was we 'have to consider that we have many sheep, we can't alienate them in the process.' Ladies and gentlemen, welcome to big tent Catholicism, where there is room for everyone — those who believe the teachings, but most importantly, those who reject them.

Nothing remains neutral. Nature abhors a vacuum. When an identity is lost, it is replaced with another. The idea that the bishops are actually open about and defending the insane idea that the Deposit of Faith cannot be stressed or taught because some people might leave the Church is beyond stupid.

First, people have left the Faith by the tens of millions since the time these men were in seminary — tens of millions. Many of those who do remain treat the Church's teachings like a Sunday brunch buffet.

Second, the bishops seem to have forgotten that the Son of God Himself did not soften what He said to spare people's feelings and keep them "in the fold." He let them walk. That was specifically about the Eucharist. Are you listening, bishops?

The reason Church Militant spends so much time focusing on culture as well as the Church is because they are both so inextricably intertwined. There really isn't a way to untangle them. For example, in economic terms, the middle class is being wiped out, and while Biden didn't start that process, he is certainly accelerating it. There is a "middle class" in the Church as well — those of simple faith who are rocked by every one of these scandals, these demonstrations of lack of faith, lack of clarity — all of it.

It all has the effect of destroying the Faith, whittling away generation by generation until the number who actually believe are disregarded by bishops in favor of those who reject the Faith.

Somewhere in their world, they have constructed the convenient view that they can keep silent about the truth, pretending it's a genius strategy to get the nonbelievers to come into the Church. Philosophical problem here, Your Excellencies — since you stand for nothing, preach nothing, insist on nothing, what exactly would be attractive to anyone to come into?

You can't even keep those you have from leaving. What are you thinking is so cool that new members are going to want to join?

The Church is collapsing, and the bishops don't seem to understand what is meant by "Church." Too many of them are actually attacking the middle class of the Church while others are naïvely believing that they are shepherds to the "lost sheep."

When I asked one bishop, point-blank, why he disregards the faithful and never says anything about the social evils practiced by those who claim to be Catholic but couldn't be any less Catholic, his response was, "Michael, I have many sheep."

Ridiculous — the sheep don't recognize you. They reject you. That isn't a "lost sheep." That's an enemy of the truth. And however you want to handle those cases, you don't get to do it over the bones of those who believe. Middle-class Catholics are constantly steamrolled, plowed under, kicked to the curb, lied to, deceived, you name it.

It's not that the bishops are cleverly trying to get the "lost sheep" back in the fold. The lost sheep don't want to be in the fold.

The reality is the bishops don't have the spine, knowledge or formation (and in some cases, desire or faith) to teach the actual Faith.

Make the tent big enough, and far from gathering in everyone, what you actually gather underneath the canopy is error and evil. It's called compromise. 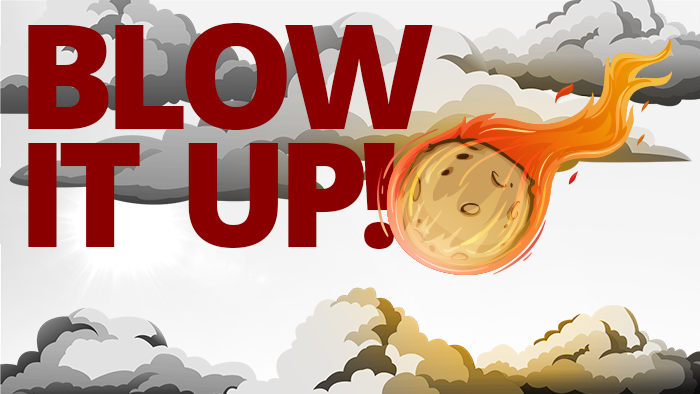 Blow It Up!
It's a den of thieves.