So if you want to know how a Catholic bishop is supposed to sound, just listen to Gen. Michael Flynn, who spoke at a Jericho March combined with a Stop the Steal Rally in Washington D.C.'s Freedom Plaza this past Saturday.

Throughout the speech, Flynn propped up hope, reinforced honor and assailed the forces of darkness — especially the Marxist media, purveyors of lies and hate.

Noteworthy is that all of this he said before the crowd of thousands from all over the country is derived from his "Catholic sense" of justice, right and wrong.

Also noteworthy is that the rally happened on Saturday, which was the Feast of Our Lady of Guadalupe, whose image fittingly was displayed on stage.

He laid out a case for 'freeing religions and religious people from prejudices that they needn't cling to.'

Flynn, you'll recall, is not only a retired Army lieutenant general, but also former director of National Intelligence who was targeted by the deep State shortly into Trump's presidency.

He knows something of the deep State's activity because of being targeted by them. The FBI set up a trap for Flynn, trying to catch him in a lie about a phone call he had with a Russian official during the transition.

When they sprung the trap, the trial went on for four years with Flynn eventually being found guilty after admitting that he had lied in response to an inconsequential question, which was later borne out from the FBI's own notes.

But the question needs to be asked: Of all the incoming Trump team, why was Flynn the target? And who did the targeting?

There are easy answers, as his brother Joe — who was right beside him on stage Saturday — told Church Militant in an earlier interview.

Remember, no one on the Obama deep-State crew had believed Trump was going to win. Hillary was supposed to have won and taken over as the latest purveyor of lies and deception and complete the coup of America and its transformation into a socialist State.

Indeed, Hillary had made the plans of what was going to happen very clear in her speech a year before the 2016 campaign. Speaking to the Women in the World Summit, Clinton laid out that "deep-seated cultural codes, religious beliefs and structural biases have to be changed" regarding "reproductive health care" — meaning of course, abortion and contraception.

The entire swamp, of course, was and still is behind that assessment.

New York Times columnist Frank Bruni, on the heels of Clinton's anti-religion speech regarding homosexuality, also went after people of faith, condemning their religious-based morals as what "elevates unthinking obeisance above intelligent observance."

But he didn't stop there. He laid out a case for "freeing religions and religious people from prejudices that they needn't cling to."

And he went on to quote a gay rights activist who said, "Church leaders must be made 'to take homosexuality off the sin list.' "

Notice the subtle but important reference there: "must be made" — made — to take it off the list. By whom? How?

Well, that's what Hillary was going to set about to do, among other things, and then along came Trump, upsetting the whole socialist applecart.

During his time, Obama with the help of Biden has quietly remade the intelligence apparatus of the U.S. government, putting key people in key positions who set about the work of slowly introducing socialism into the government — placing a "red" here and another "red" there, making sure that the state could be turned against normal Americans whenever they wanted to.

And they did this with Trump even before he took the oath. His win sent them reeling, but it wasn't long before they got back up and hatched their plan.

Flynn, owing to his long experience in D.C., knew what was going on and was too dangerous to have in an incoming Trump administration. He could completely unmask the deep State in the intelligence agencies, so they went after him immediately and sidelined him.

Biden — as the notes from the meeting reflect — was in on all of this, even being the one to suggest going after Flynn.

The deep State, perfectly aligned with the deep Church, have a goal to bring the world into a whole new age — a 'Great Reset.'

Without Flynn, Trump was handicapped because too many around him in those earlier days were part of the deep State, as Trump would discover too late to do much about.

But Trump knows now, and what's more, the deep State knows he knows and that's why this election had to be stolen from him. A "woke" Trump, with all the powers of the presidency for another four years, would spell their doom.

Make no mistake, the deep State, perfectly aligned with the deep Church, have a goal to bring the world into a whole new age — a "Great Reset" — and we keep hearing that "reset" will involve the end of religion, especially authentic Catholicism.

The two institutions that needed to be invaded to bring this all about were the Church and D.C., and skillfully, they have done just that.

As a Catholic-minded patriot, Flynn can and does speak from experience about just how not only a private citizen's life can be ruined by the deep State, but also about how the country can be overrun by these evil Marxists.

There are many who know (probably most of them who grasp) what is going on in the Church and even how all this is aligning with the deep State activities — yet, nothing. There's not a peep, no speech, no suffering — not a heroic, principled one among them.

They have kept their mouths shut for decades about "reproductive health" and frankly, many of them would probably very much enjoy watching homosexuality be "taken off the list of sins." They already go about their lives as though it is anyway.

But as Flynn said Saturday, truth always wins. This year, 2020, has been the vehicle by which all the evil has been made manifest, and now with just two weeks to go in this tumultuous year, you wonder: Is something else about to happen as patriots continue marching around the walls of the deep State's Jericho?

Catholics, pray. Hillary and the entire deep State have already told you what happens if they win. 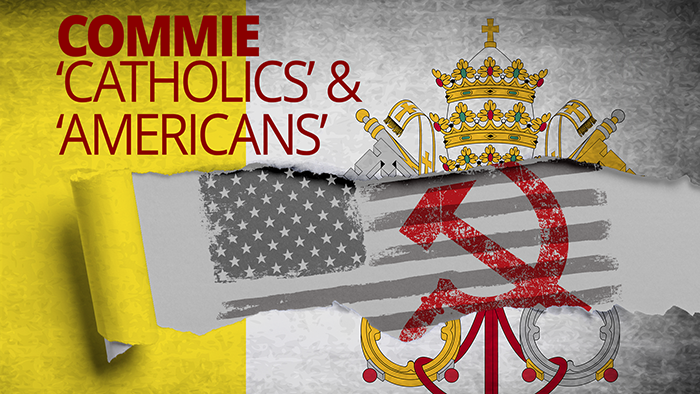 Commie ‘Catholics,’ ‘Americans’
Traitors — all of them.