Signing their own (eternal) death warrants.

I'm Michael Voris, coming to you from Baltimore in our continuing effort to be a pain in the rear to the U.S. bishops — right outside the bishops' hotel, where, just a moment ago, they turned into full-out enemies of Christ, abandoning Him to the political winds.

It was almost unanimous: 222–8. Three bishops abstained. For those keeping score at home, that's 95% that approved of doing nothing about the ongoing abomination. Another way of looking at it: 95% voted in favor of continuing to disobey canon law 915. Another way of looking at it: 95% agreed to continue supporting the blatant lie by McCarrick and Wilton Gregory back in 2004 (when they lied to all the other bishops about Rome saying you cannot give Holy Communion to child killers).

Hey, Your Excellencies, why don't you talk with us? Get the smell of the sheep on you.

Within seconds of the vote being cast, the secular media couldn't wait to publish the blaring headlines. Every single outfit — New York Times, Associated Press, Washington Post, Reuters, Wall Street Journal, CNN, all of them with a collective reach of almost the entire nation — blew up tens of millions of phones with headlines like, "Conference of Catholic Bishops Approves Communion Document Without Singling Out Politicians Who Back Abortion Rights." The New York Times headline read: "Catholic Bishops Avoid Confrontation With Biden Over Communion."

What the bishops have failed to grasp, however, is that they will be unable to avoid a confrontation with Christ, whom they have betrayed once again, when they die. The U.S. bishops were never going to defend the Real Presence in the face of their phony Catholic overlords in the Democratic Party — who have enriched their coffers beyond their wildest dreams over the immigration and refugee issue.

Even brain-dead Biden called it back in June, knowing full well that this sniveling bunch of pansies would never have the necessary amount of testosterone to do the right thing. During final debate on the actual document, Bp. Joseph Strickland of Tyler, Texas, proposed stronger language in the final document regarding the scandal of child-killing politicians being given Holy Communion.

And now, watch for yourselves just how the homosexualist-modernist bureaucracy works when a matter of faith comes front and center.

Church Militant was monitoring the entire debate and vote, and, as soon as it was cast, those couple of hundred Judases broke for lunch. We then went downstairs at the same time, knowing we would bump into some of them. We didn't waste any time letting them know that they were traitors and had perpetrated a great scandal on the faithful.

The arrogance of these men is beyond belief. The "dialogue" crowd wanted no dialogue. I personally said to a group of three standing directly in front of us in the buffet line, "What you have just done in voting for this ongoing sacrilege is scandalous, wicked."

The three — hiding behind their masks — all turned around and said nothing, with the exception of one "thank you." I said to another bishop in the dining room (with a couple of others at a table) that voting as they did is reprehensible and they will have to answer to Christ for this.

He said back, "What did we vote for?" I said, "Continuing to allow sacrilegious Holy Communion." He responded, "That's not what we did." I said, "Well, it sure is how the media is reporting." He said that they didn't read the document.

I said, "Really? Are you saying Joe Biden is now going to be refused?" He said, "That's up to his bishop." And I responded, "So sacrilege is OK in this diocese but not in that diocese?" He grew angry and ended the conversation.

Voting as they did is reprehensible, and they will have to answer to Christ for this.

Remember, this is the dialogue crowd, always wanting to hear from the faithful — unless you disagree with them. Standing behind another group, I said, "Hey, Your Excellencies, why don't you talk with us? Get the smell of the sheep on you. Here we are. The sheep — baa, baa, baa."

Of course, no response. These men serve the world, are raging hypocrites and thieves, just like their episcopal role model, Judas, who also handed Jesus over for money. And remember, Catholics, they all came here on your dime, spending over a million dollars of your donation money.

Heck, they could have voted in favor of continued sacrilege for free, just staying home. But they would have missed the expensive meals and feeling of being important. While the Church burns, the shepherds continue devouring the flock and rejecting the central teaching of the Church.

The words of Our Lord are going to ring for eternity in their ears: "Go away. I tell you, I do not know you." 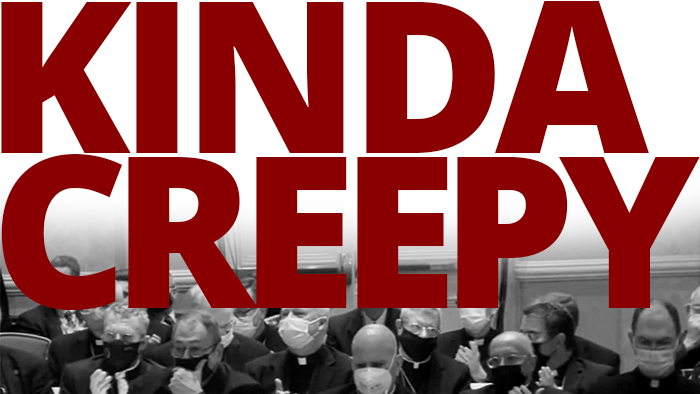 Kinda Creepy
'Good luck with that.'