Bishops of the Dead

Ruling over a graveyard.

One thing that happens when you do the work we do is you travel frequently. That means that, many times, you get to the Mass that fits the flight schedule in any given diocese.

Recently, our travels took us to a couple of parishes where the reality of the future of the Church of Nice is staring you right in the face. The "where" doesn't really matter because, frankly, this is the case all over America. Since I refuse to wear a mask at a Mass, I usually sit far away from people and near the back in these circumstances.

That affords me the opportunity to see the entire congregation, and I have to tell you, it's extremely sad. First, the overwhelming majority of heads are gray and white — people well into retirement (in short, old). There's nothing wrong with old people going to Mass. In fact, an old person who doesn't go to Mass is a fool, as the need is more pressing as their time on earth lessens.

But when it's only old people in the Church, then something is wrong. There was the customary smattering of families, a small number, with dad and mom in their mid-40s with their 2.1 children in tow — normally a son obviously bored off his nut and a daughter texting like crazy.

You do see the occasional toddler, but he's usually with grandparents. Aside from that, you're really hard-pressed to see essentially anyone between 20 and 60. At two different Masses over two weekends, that was the scene. You could count on one hand — at two different weekend Masses — the number of young men and women by themselves.

When it's only old people in the Church, then something is wrong.

This is not the mark of anything other than a dying portion of the Church. And notice we say "portion." It's the portion of Catholicism that, over 10 years ago, Church Militant dubbed the "Church of Nice"; the squishy, mealy-mouthed, God-is-love, everyone-goes-to-Heaven brand of Catholicism promoted by virtually every member of the American hierarchy for the past 60 years.

And if you want to see the effects, just pop into any usual parish in the country. Sure, there are exceptions, but they are the exceptions that prove the rule. The mass exodus of tens of millions of American Catholics that we have seen these past decades has resulted in one of two paths out of the Church.

About half go to some conservative Protestant congregation. The other half abandon religion almost entirely. That's quite the accomplishment on the part of the hierarchy — equal-opportunity apostasy. Well done, ladies. You've accomplished what no other group of bishops has been able to do in 2,000 years.

So this portion of the Church is dying, and dying quickly. What began here in Detroit in the mid-1960s under liberal cardinal John Dearden as a means of dismantling the Church has completely achieved its goal.

If it's true that former U.S. Communist Party member Bella Dodd was instrumental in getting hundreds of communist agents planted into U.S. seminaries back in the 1920s and 30s as Joseph Stalin had ordered, then Dearden would certainly have fit the bill and the timeline.

For decades, Dearden types have been downplaying the Eucharist while up-playing anything not Catholic. They peppered their seminaries with gay men, emotionally and psychologically castrated males who were not only spiritually immature, but also lacking in any kind of masculine virtue.

Even if a given individual man wasn't gay, it's a sure bet he was a socially awkward, wimpy dude who would inspire exactly nothing in a normal male — except for him to get up and leave the Church.

The Church of Nice is nearly dead. And while, for the time being, it is still the largest portion of the Church, the scales are showing signs of tipping fast toward tradition. It won't be very long now before the only real Catholics around will actually be real Catholics. In a couple of years, the shameful archbishop of Detroit, Allen Vigneron, will be just another sad footnote here in Detroit — he who filled Dearden's shoes quite ably.

He's given the appearance of supporting tradition, but, in reality, he's been an enemy of it. He has more kind words and deeds for other faiths, while closer to home, he persecutes good priests who pose a threat to exposing the homosexual underbelly of the Detroit chancery. He has less than three years to go, which means in a few months he essentially becomes a lame duck, and anyone who really cares in Detroit just keeps checking their watches, counting the days.

We focus on Vigneron, not only because he is the current head of the archdiocese where it all began, but because he is smack dab in the middle of a boatload of weak men his age who will soon also be disappearing from the episcopal landscape.

Their tombstones will collectively read, "Here lies an ineffective bishop who lied, cheated and drove the flock from the Church." Their replacements will be every bit as much a group of losers as they had been, but they will be presiding over the carnage of the Vignerons and Dolans and the whole lot of them.

They will become the successors but to a catastrophe of no sheep. They will have very sizable endowments numbering in the billions of dollars, but there won't be anyone left to spend it on — except themselves. But for the other game in town, over on the tradition side, things are looking very bright.

Even if a given individual man wasn't gay, it's a sure bet he was a socially awkward, wimpy dude who would inspire exactly nothing in a normal male.

Over there, it's almost like a different religion. There are young people as well as old, children of all ages, male altar boys only, young men who strike you as something that the Church of Nice would want to perform an exorcism on to banish the demon of toxic masculinity. The reason it looks like a different religion is because, for virtually every reason, it is.

Tradition exists for a reason. It has vitality. It has purpose. It has meaning. It lasts because it is the nature of tradition to last. That's sort of why they call it tradition. Of course, the Church of Nice hates tradition because tradition lasts and fads disappear. Old lesbian nuns will soon be gone: Give them about another 10 years or less, and many of them are already dying off.

Likewise, the old queens in the chanceries will also be gone because they won't have any people to lord it over, their dioceses having imploded. Vigneron, for example, is implementing a plan here in Detroit that will have the result of reducing the effective number of parishes down to maybe six or seven dozen.

When his mentor Cdl. Dearden was ruling Detroit back in the '60s, there were hundreds and hundreds of parishes (more than 400 when he took over). When Vigneron packs up in a couple of years, there will be about 70 left. Cupich and his lot will be ruling over a graveyard, bishops of the dead. And they will be getting exactly what they will deserve.

What is going on in the Church right now is the death throes of the Church of Nice dying and the birth pains of tradition being reborn. It's going to be both sad as well as painful, but time marches on, as does the will of God.

He allowed Satan his time, and the Devil certainly made hay when the sun shined, but you can look around your local parish and hear the clock ticking. This is all quickly changing. So take heart. Good does win in the end. God is triumphant, and His will is always done. 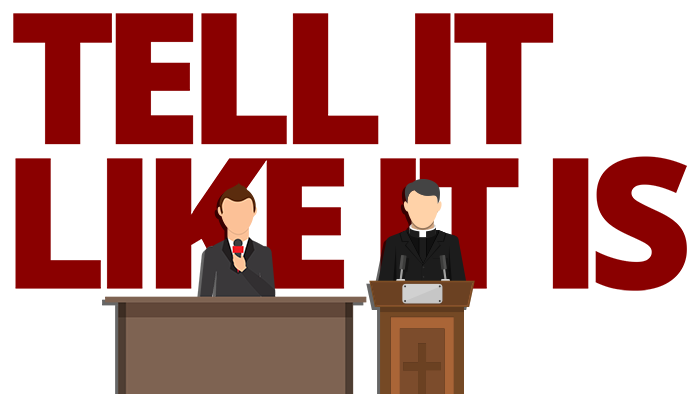 Tell It Like It Is
Only the truth matters.