Blood on the Walls

I'm Michael Voris coming to you live from our Church Militant studios here in Detroit where we have learned that the U.S. bishops' conference is extremely concerned about the Silence Stops Now rally planned for next Tuesday.

Sources inside the Baltimore Police Department tell Church Militant that the bishops' conference was actually looking to change venues in a last-minute attempt to sap some of the energy from the rally where thousands of Catholics are expected to show up and make their presence known.

Church Militant brought you the disgraceful news when we were in Rome that the bishops had used your money to hire extra security to protect themselves from faithful Catholics.

And get this gem: In addition to feeling physically threatened and looking to change venues at the last minute — which proved unworkable — officials at the bishops' conference informed the Baltimore Police that attendees at the rally were going to disrupt the bishops meeting and "throw blood on the walls."

We have that straight from the mouth of officials in the Baltimore Police Department. That's what they were told by someone in the bishops' conference who contacted the police with this phony baloney accusation.

The effort by the bishops' representatives to try and paint faithful Catholics as a physical threat, planning to storm their meeting, throw blood on the walls and Heaven knows what else proves the point of how completely out of touch the U.S. bishops are.

It was insulting enough to hire extra security — again, paid for with your money — but to contact the police and tell them that a few thousand Catholics praying the Rosary and listening to talks about the seriousness of rampant homosexuality in the ranks of the clergy, that's just disgusting.

The hierarchy in America is simply out of touch and out of control.

And for the record, so everyone is clear and none of the bishops' lackeys in their bought-and-paid-for media can accuse us of making this up, we were told all this directly by the officials in the Baltimore Police Department who spoke to the bishops' representatives — who were the same ones to contact the police.

To put it mildly, what a disgusting, miserable thing to do, to get in touch with the police and deliberately misinform them — which is also called lying — of potential violence of thousands of faithful Catholics gathered to pray for them.

And we know this first hand because, following the rotten things said to them about the rally attendees, the police called us and spoke to us to inquire about what they had heard. It doesn't get any more directly reported than that. And it's filthy disgusting.

Where's all the garbage about meeting us where we're at and going out to the peripheries and having an encounter with us? Hey Tobin, hey Cupich, don't you want to come get the smell of the sheep on you? Here we are.

See, this is how some of these wicked bishops operate: in the shadows, stealthily and dirty sneaky. And the bad ones treat their faithful priests like this all the time. Some bishop or bishops in that conference instructed their security thugs to get in touch with the Baltimore Police and lie about the intentions and actions of the rally participants.

And the false accusations were presented so believably that the police actually picked up the phone and called us to make sure we weren't planning any kind of violence. I know because I was the one they called. They also spoke with another one of the organizers from another apostolate to double check.

So can anyone be surprised that they would contact the police and lie about those attending the rally? Think about it: blood on the walls — seriously?

And not one of them will inquire with their brother bishops, their good ol' boys' club, to own up to this evil action. And to accuse faithful Catholics of planning violence against the bishops is an evil thing to do.

None of these men, the wicked ones among them or the complicit ones who let this garbage go on, none of them are ever accountable for any of their actions — until they die.

They lie — lie about what they knew about McCarrick. They lie to the police. They lie to the courts. When many of your spiritual leaders are blatant liars, then the Church is in desperate straits.

And let's be clear, this is all happening because they want to protect the push for sodomy in the Church. And given the current crisis, they need to circle the wagons and protect the advances they have made. They actually think it's all right to have gay priests and gay formators in seminary and gay seminarians.

The cowardly bishops don't want to face the truth so they shut up and make up loads of excuses and deny the reality of it, while the truly wicked evil ones among them — the Judases — run wild, unchecked and unaccountable.

Again, we ask the question, will one of these bishops come over to the faithful thousands of Catholics and offer one word of solidarity, comfort or consolation? Will they come forward and allow the faithful to ask them any questions?

Nope, they will wall themselves up behind their beefed-up security, investigate themselves, come up with some meaningless plan that deftly sidesteps the real issue of homosexuality within their own ranks and they will go back to their respective dioceses and say everything has been resolved. And they will certainly hit you up to finance it all.

They'll cry some crocodile tears and perform some phony superficial day of atonement or whatever, but not a single one of them will resign, tell the truth, or even step out to the assembled faithful and say what everyone knows.

Too many of the leaders of the Church in America are homosexualists or cowards or traitors to the Faith or some combination of the above. And if some of them get mad at that, too bad. Ask yourselves why faithful Catholics are willing to believe it.

Thousands of Catholics are coming from all over America to stand right next to your meeting as a testimony to your lack of supernatural faith, your destruction of the Church and to pray for you to come to your spiritual senses.

Ask yourselves, Your Excellencies, why that is happening. Instead of sending your thug to the cops to lie about us, why not do some introspection and ask why so many are so fed up and angry and don't trust you and think you play fast and loose with the truth.

You have a credibility disaster on your hands and are completely clueless about it. They have been taken over by the demon of impurity, and they do not care what they have to do or who they have to destroy to hold on to their shrinking power and non-existent moral authority.

They have corrupted the minds of seminarians with their protestantized theology. They allow gay or gay-friendly priests to present seminars and retreats for seminarians and clergy all over the country.

They lend their support to all this filth and would never dream of condemning the words of gay cheerleader clergy. In fact, they openly support them — no extra security to protect themselves from those demon-possessed clergy.

For those of you who cannot attend, the event will be live-streamed on Church Militant starting at 1:30 p.m. ET on Tuesday, Nov. 13.

For those who will be in person, we'll see you all in Baltimore, and be sure and bring all those extra bags of blood to throw all over the walls once we tear down the barriers and storm the meeting — evil, ridiculous and evil.

What a great way to evangelize — starting with the Baltimore Police Department. 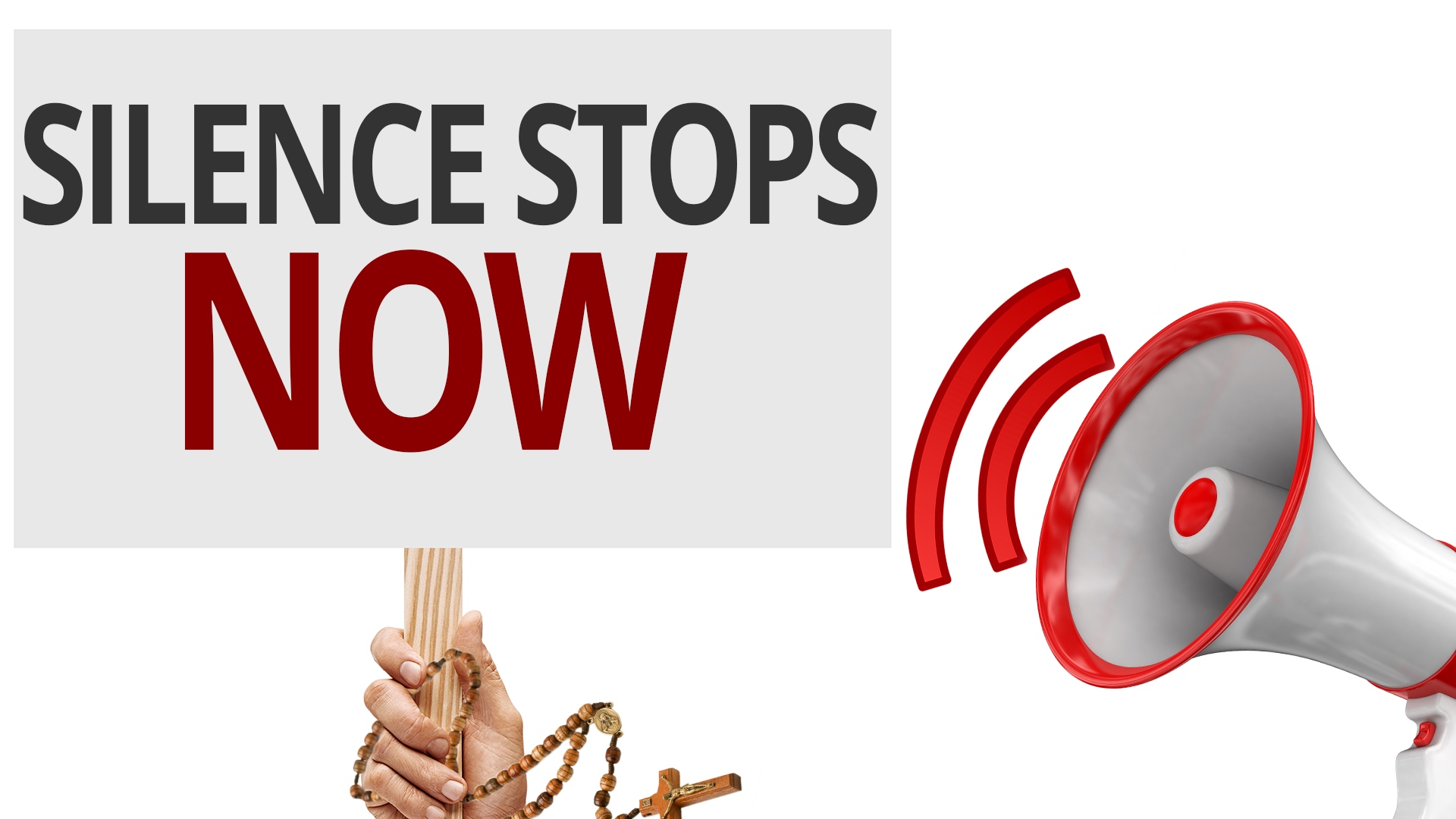 Silence Stops Now
For the love of God.

The COVID Ghetto
It's right around the corner.
Evening News